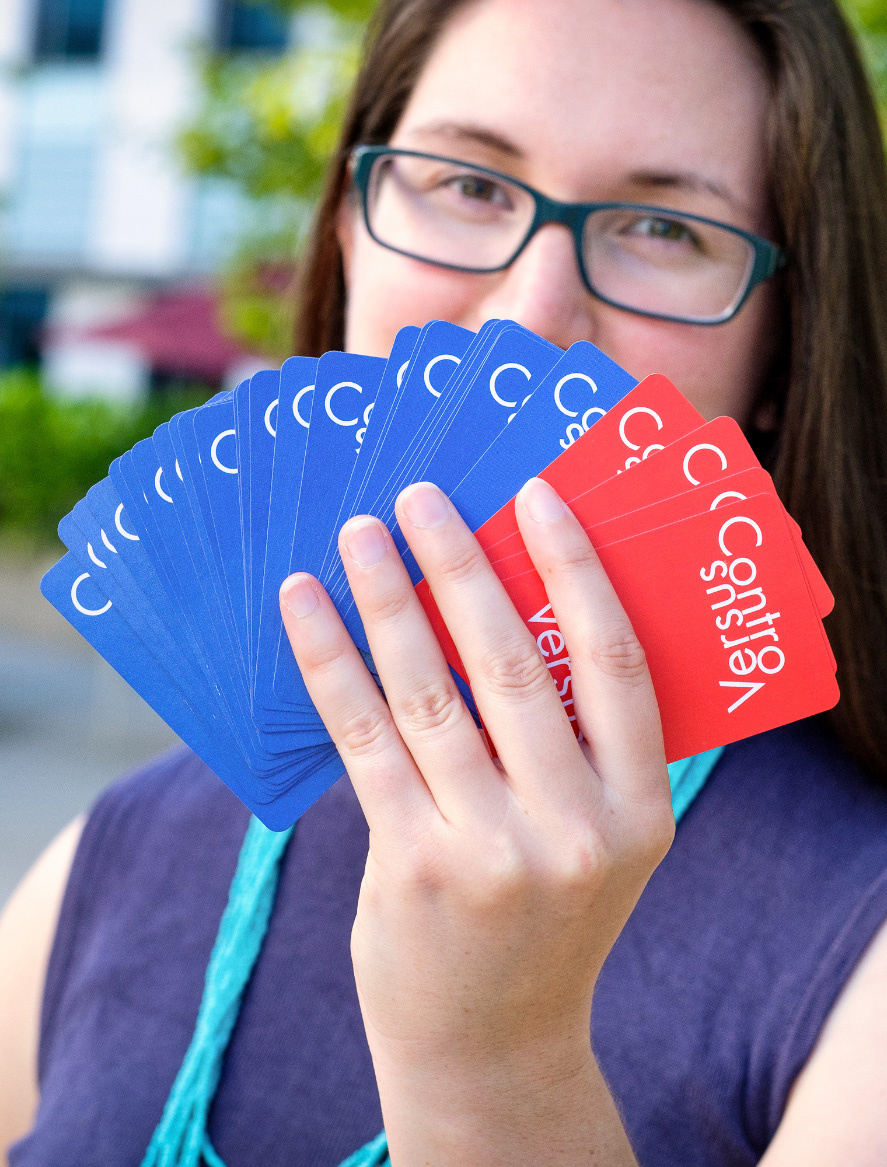 Lay Your Cards on the Table

Can a card game help change the tone of political discourse? Claire O’Hanlon ’09 thinks so.

In this friendly card game, the red cards you’re holding say “alternative facts,” “coastal elites,” “electioneering,” “hopes and prayers,” “pharmaceutical companies,” “same-sex marriage” and “the gig economy.” A Selector places a blue card on the table for players to consider: “Government should never infringe on this.” You can play one red card as a response. Which one do you choose, and are you ready to defend your selection?

If you’re intrigued and interested in discussing some of the most important issues of our time, then ControVersus, a card game created by Claire O’Hanlon ’09, may be one you add to your game night rotation.

On her website, O’Hanlon describes ControVersus as “a card submission game for wonky friend groups, aspiring deep state operatives and anyone who wants to sabotage Thanksgiving dinner.” It’s also for people who just love politics and for educators who want their students to have productive conversations about political issues. O’Hanlon hopes it can help change the tone of political discourse.

“This game tries to make it so you can talk about this stuff without necessarily talking about what you believe,” says O’Hanlon, an engineering alumna who, besides being a game creator, is also a health services, economics and policy researcher in Los Angeles. “You can discuss issues in a more abstract way. The game is an opportunity to talk about politics and gives you an opportunity to say what you think and try to convince others of your views, though that’s not the point of it. The discussion is.”

O’Hanlon began work on ControVersus in 2017 while at the Pardee RAND Graduate School, where she was part of a Tech Lab Pilot to design and create technology-based projects to improve civil discourse.

O’Hanlon believes that everything, in some way, is a political decision whether it’s the research questions that we choose to pursue or the company we work for. “Trying to divorce life from politics, to pretend to be objective, I think, is a disservice to us all,” she says. “We are really uncomfortable disagreeing with each other anymore. With this game, you don’t all need to agree in the end.”

In her own family, uncomfortable discussions were part of growing up. O’Hanlon describes her household as being politically and religiously divided. “My mom is a Catholic Democrat, and my dad is an atheist Republican. We talked about politics a lot. But we were also very respectful of each other.” She notes studies that show that families have become increasingly divided over politics—another reason her card game is so important right now.

In ControVersus, blue “idea” cards cover about 400 topics that O’Hanlon selected by cruising political sites like MSNBC and Breitbart, reading political books and interviewing those in her own social network. The value cards used to respond to the red cards provoke players to defend their choices, which may sometimes not align with their own beliefs. Players who think they have a better defense than the one offered may chime in to potentially earn points.

Through the user testing that she’s done, O’Hanlon has seen productive interactions among diverse groups: the politically homogeneous and those on opposite ends of the political spectrum. “I’ve observed that ControVersus is a safe way for people to talk about their values, a way for them to express thoughts that might not come up otherwise or that they might not feel like they can talk about. The game helps people talk about politics without creating an emotionally charged environment, to talk current events in a way that is divorced from trying to convince someone of a point of view.”

She’s working with a board game industry consultant to promote the game. “I would love for this to be something that’s played in educational settings or in a setting where you want to have an activity to create dialogue,” she says. “I think that there is potential for it, especially during a time when we’re trying to improve campus climate and encourage viewpoint diversity.”

With all that’s been happening in politics lately, O’Hanlon sees lots of opportunity to expand the game and its reach. She’s contacted academic institutions about playtesting, has added ControVersus to the online gaming platforms TableTopia and itch.io, and she is actively recruiting Mudders and others to play it.

“We Want to Pay it Back”