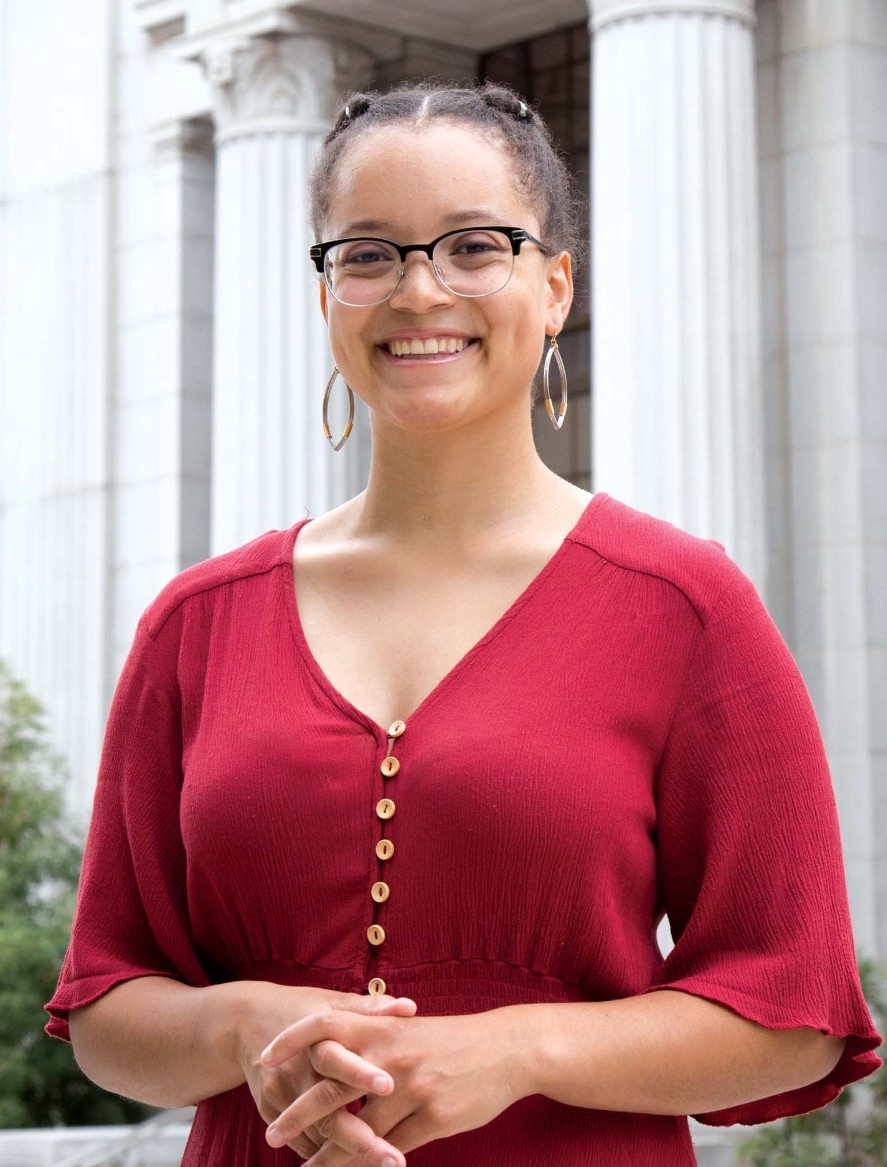 Written by Melanie A. Farmer Photo by Seth Affoumado

San Jose, California, sits at the heart of innovation and emerging technology—Silicon Valley—so why does Mary Jessie Celestin ’21 think it needs reinventing?

“Where we live, there is so much tech and innovation happening, and at the same time, the apprehension or fear toward technology and general distrust among residents of San Jose is super valid,” she says. “There’s a huge disconnect between local officials and developers in San Jose and the community, culture and identity of our city. What is the point of innovation in a city if those most marginalized aren’t protected, supported and centered in the process?”

That’s where San Jose Strong (SJS) comes in. The one-year-old nonprofit organization, founded by Celestin, serves as a hub for anyone interested in reinventing San Jose “for and by the community.” Their platform, comprising social media accounts, website and, soon, a mobile app, serves as a destination for residents to learn about San Jose happenings, local organizations, businesses and events. The organization also serves as an organizing hub by providing its members with the resources and connections to create initiatives, programs and events that support the San Jose community.

“I’m really interested in the idea of developing or revamping cities with smart, innovative infrastructure but designing within the context of the community and its residents,” says Celestin.

The impetus for San Jose Strong emerged during the height of the Black Lives Matter (BLM) movement. When the world shut down due to the pandemic, Celestin was stationed in Auckland, New Zealand, for a study abroad program. Like so many other students living through a first-ever pandemic, Celestin was suddenly sent home and rounded out her junior year taking classes remotely in San Jose. Across the U.S., the BLM movement had taken off, and it spurred Celestin to action.

Living with her parents in downtown San Jose, within walking distance of City Hall, odds were Celestin was participating in a BLM protest or could view or hear one happening from their home. “I was feeling overwhelmed whenever I went online, seeing all of these horrible acts of violence against Black people.”

On Blackout Tuesday, held June 2, 2020, a day of action played out via social media to protest racism and police brutality, Celestin posted to her Instagram a “Guide to Activism.” It provided followers with up-to-date information on where to protest and how to support BLM and community activism. That post has since garnered 50,000 views. “People were so engaged. They wanted to find out how to get involved and what to do.”

Building on that momentum, and the daily 50 to 100 direct messages to follow, Celestin quickly launched San Jose Strong. That summer, she and her collaborators focused on establishing its organizational structure and mission and implementing initiatives and committees, including a fellowship and mentorship program for local high schoolers. The app will soon be piloted with San Jose residents. Celestin credits a string of Mudders who sit on the website and app committee, including Sega Birhane ’20, Pip DiGiacomo ’18, Ciante Jones ’21 and Elijah Whitsett ’19, responsible for developing the technology behind San Jose Strong.

To date, SJS’s network has grown to more than 10,500 social media followers, 250-plus Discord server members and over 75 email list members. The organization comprises some 50 active members and 15-plus team leads, and together they have shared 200+ guides to local initiatives in San Jose, hosted 24 events and raised more than $7,000.

Born in Oakland, California, Celestin moved with her parents multiple times across the U.S. before settling down in San Jose in 2011. Celestin says she was fortunate that her parents—her father, who is Haitian-American and mother, who is Cape Verdean-American and Irish-American—instilled in her wisdom and insight to view the world through a wide lens.

Her early interests in not only math and science but also culture and the liberal arts, fueled a stream of creativity that she pours into all aspects of her life, including as a fantasy writer and musician. Indeed, her love for creating fictional worlds and cities spills over to her passion for human-centered design and civil engineering.

“HMC drew me in because I knew I would be exposed to all branches of STEM and engineering, and the liberal arts as well,” says Celestin. The project management experience gained from the HMC curriculum, she adds, is a valuable takeaway—learning to identify problems but then thinking about how to develop a solution from which the user will benefit.

“We need more socially aware scientists and engineers. We can’t design things in a vacuum or cancel out the human experience.”

At HMC, Celestin served as co-president of the school’s Engineers Without Borders chapter, as a STEM curriculum developer and teacher for STEAM:Coders and as a member of Black Lives at Mudd. Celestin is a singersongwriter in the neo-soul, lo-fi musical genre. Alongside others from The Claremont Colleges, she opened for TeaMarr during the Good Vibes Only Festival during fall 2019 at HMC and did a live stream performance for a 5C Solidarity event to help students with mutual aid during the pandemic in summer 2020. Her debut album “I Swear I’m Not a Zombie” is available on all listening platforms under her stage name “maryjessie.”

Her varied interests in engineering, design, fantasy literature and music are interconnected beautifully and build on inspiration from the streets of San Jose, through its infrastructure, people and community.

“I’m inspired when I go to places like Nirvana Soul [a local coffee shop] or when I take a trip to a Farmer’s Market or the flea market,” says Celestin. “I get so many ideas just from being out in the city, observing the community and neighborhoods, and being around people. I want folks to come to San Jose Strong and to get plugged into all the amazing organizations, businesses, projects and programs folks have created here in San Jose.”