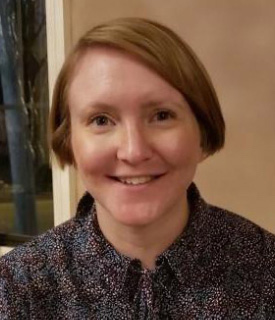 For 2020–2022, the College welcomes a new junior postdoctoral scholar as the Hixon-Riggs Early Career Fellow in Science and Technology Studies. Fellows come from varied disciplinary backgrounds and work on projects that examine the social dimensions of science and technology.

Ekaterina Babintseva, a historian of science and technology, is interested in learning how the developments in cybernetics and artificial intelligence prompt new approaches to understanding the human mind and its creative abilities. She also studies how ideas about minds and computers traveled across political, economic and ideological contexts in the 20th century.

Babintseva strives to help her students develop a critical perspective on the role of contemporary digital technology in society. Using historical, sociological and anthropological perspectives, she encourages students to ask questions about racial, gender and class ramifications of computing, AI and data technologies. She believes that answering questions about who benefits from contemporary data collection—whose data has historically been most targeted? What are the social and ethical consequences of introducing AI into contemporary governance?—can help students become responsible developers and consumers of digital technology.

In addition to completing her PhD at the University of Pennsylvania, moving across the country during the coronavirus pandemic and teaching her first class at Harvey Mudd this fall, Babintseva has been writing a book (the working title is Learning with Machines in the Cold War United States and the Soviet Union), which argues that during the 1960s and 1970s, despite ideological and political differences, the United States and the Soviet Union came to view the human mind as an important resource for their economies—that despite political, ideological and economic differences in the 1960s and the 1970s, the two super powers articulated a shared vision of the human mind.

Now that she’s had some time to settle in, Babintseva provides some information not found on her CV.

You speak Russian, English and French. Where did you grow up?

I grew up in Ekaterinburg, a Russian industrial city near the Urals mountains, which serve as a geographical divide between Europe and Asia.

What was the last book you recommended to a friend?

The last book I recommended to a friend was Labyrinths, a collection of short stories by an Argentine writer Jorge Luis Borges. Writing in the mid-twentieth century in Labyrinths, Borges offered an artistic reflection on what it means to live in the world that is becoming increasingly codified, calculated and calculating. As a historian, I am well familiar with that era. It was the time when research projects in information theory, computing and semiotics were mushrooming, and the general public thought that everything in this world would soon be codified and controlled by computer programs. I admire how insightfully Borges captured those trends of his time. Labyrinths is like a mid-20th century Black Mirror except for less doom and gloom.

What would you be doing if not in your current profession?

I’d probably be an investigative journalist. Essentially, I would be doing the same things I am doing now as a researcher: gathering and analyzing information, establishing the causal effects of certain events, explaining people’s standpoint and telling a story.

What do you like most about teaching at Harvey Mudd?

I’m excited to find myself in a community where liberal arts and STEM complete rather than exclude each other. I know for a fact that teaching the history of science and technology is especially fun when you have students with diverse interdisciplinary interests in your classroom. I enjoy working with students to build a collaborative intellectual space to think about the role of data in our society.