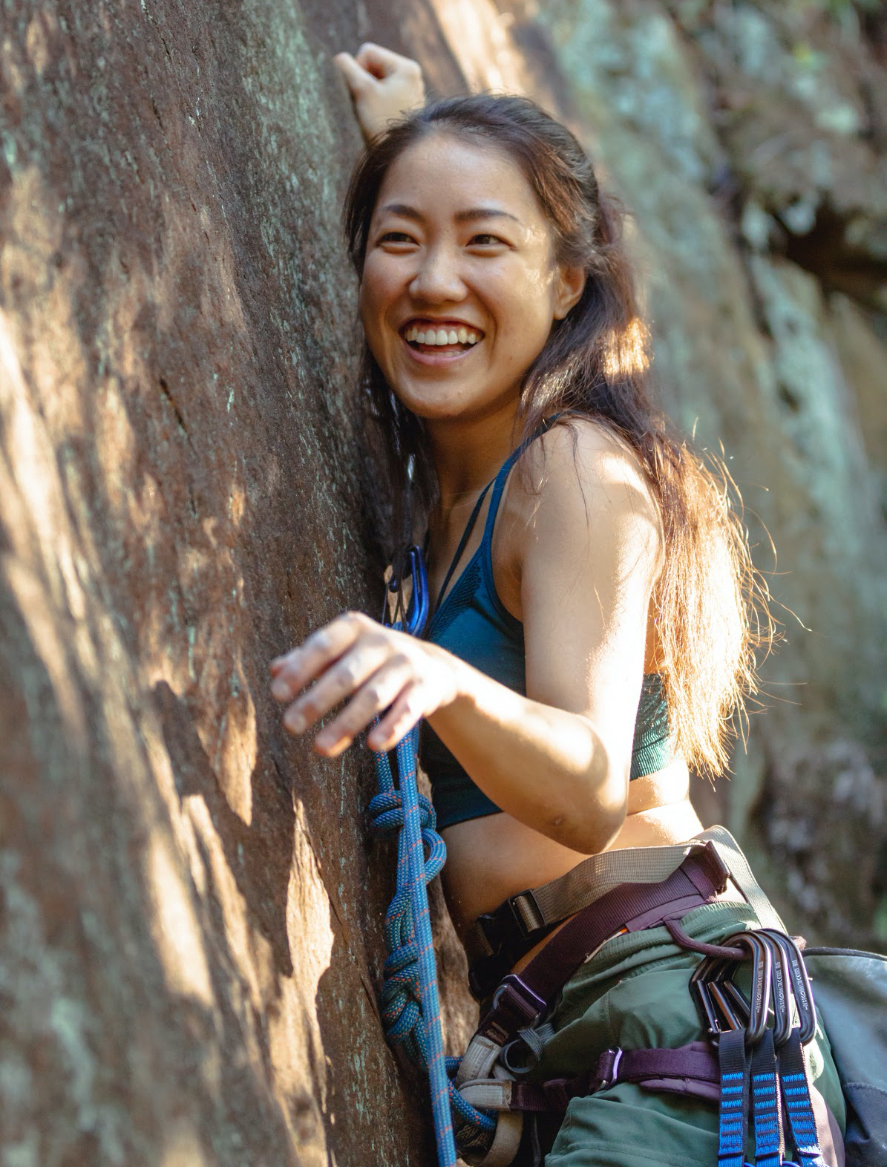 Cathy Chang ’21 was born in Taiwan, and when she was 11, her parents moved the family to America in pursuit of a Western education for their two daughters. Chang sought a college where she could grow and learn, and Harvey Mudd has delivered. From challenging physics and humanities classes to dorm life, rock climbing and a study abroad opportunity, the College has grown on her. She’s even gotten to know the donors of the scholarship that is helping make her dreams come true.

For the first few years of my life in Taiwan, I lived in the rural south. Never-ending farmlands, clear rivers filled with tadpoles, seasonal crops and chattering animals were integral parts of my surroundings. My bicycle was my best friend; she and I had multiple awesome adventures together. When I turned 7, we moved north to a more urban area in Taiwan. I was introduced to a more fast-paced, modernized environment. I bid goodbye to my close relationship with my bike; it was too dangerous to ride it in urban Taiwan.

Four years later, my family and I moved to America and settled in a suburban and relatively Asian neighborhood. During this time, novels and audiobooks became my best friends.

So far, every stage of my life—the simple and complicated, isolated and bustling, Mandarin and English—has contributed something essential to my growth.

STEM became an interest when I was around 6 years old. Around that time, my parents bought an old television, and I became addicted to the flat screen that took me to another world that I never knew existed. My parents quickly regretted the decision (it is the epitome of unproductiveness in their eyes), so, they cut off the satellite cable for the television. Upset and suffering from television withdrawal, I decided to “fix” the television myself. On the balcony, I saw the colorful ribbons that contain my favorite shows. I became entranced. The television showed a 2D image, but the cable was a line. What? How? Tiny me stood confused in front of the cut cables, wishing that I could repair them, but not knowing where to start. Through STEM, I searched for answers and deepened my understanding of the world around me.

I put a lot of thought into what I wanted out of my college career. I wanted to attend a college where I get to grow and learn from people; I wanted to be surrounded by professors who care and students who help each other thrive. I saw all of this when I visited Mudd. I remember walking through Platt and hearing students casually discuss things they learned in classes and their own personal ponderings, from literature to the most recent scientific advances. I remember seeing a student casually walk into a professor’s office and talk about their day.

Mudd is undeniably a hard school. When I was on campus, most of my weekdays and weekends during the school year were often spent at the physics lounge or Shan, hogging a small, peaceful space to concentrate on homework or working on group projects. But, I would not have chosen my major or take the classes I do if I didn’t enjoy it. I especially love humanities classes, where I learn to think outside a scientific context. Many of my most cherished college friends and funny moments come from group projects. I lived in a rowdy, fun dorm with a truly endearing vibe.

I also did research with physics professor Theresa Lynn on quantum information and studied abroad in Spain. As I entered my sophomore year, I was introduced to rock climbing by my friends and fell in love with it. Through climbing, I met and bonded with people I could have never imagined meeting.

I’m taking a gap year for 2020–2021, and I’m in Taiwan for the entire academic year doing research in marine biology with a professor at National Taiwan University. This alone is astounding, something I never would have thought a possibility. What I’m doing is far from my declared major and even farther from where I live—America!

This is my third year receiving the Harvey Mudd scholarship, and every year, I wrote to my donors, Hal and Mary Harris, sincerely thanking them for making this dream come true for me. I chatted with the Harrises over Zoom this past May. We spoke about lots of things, from all the unexpected yet beautiful turns that Hal took in life to Mary’s philanthropic endeavors to the reason why they donate to Harvey Mudd. I am truly blessed that Harvey Mudd has matched me with them.

When I told them about my gap year decision and how they’ve inspired me to follow my heart, they sent me a letter full of positive encouragement, which I framed. Never have I had this kind of connection with another human being. They believe in me—in me! They want to see me thrive and grow, in my own way.

After graduation, I’m considering continuing my education and applying for a PhD, or perhaps working in a lab. If there’s one thing I learned during 2020, it’s that life takes you to the most unexpected places.