Rafael Alvarez ’86 believes every student is a contender in the fight for college success.

His formal title is director of the San Diego City College Mathematics, Engineering, Science Achievement (MESA) program, but to his students, Rafael Alvarez ’86 is known as the Corner Man. Like boxers in the ring, Alvarez’s students rely on his training, coaching and motivation to stay in the fight for reaching their full potential in higher education. Having had to struggle to understand learning culture himself, Alvarez is dedicated to deconstructing, understanding and demystifying it for his students, and now—with his new book, Turning on the Lights: Using Learning Culture to Increase Student Success—for all students. 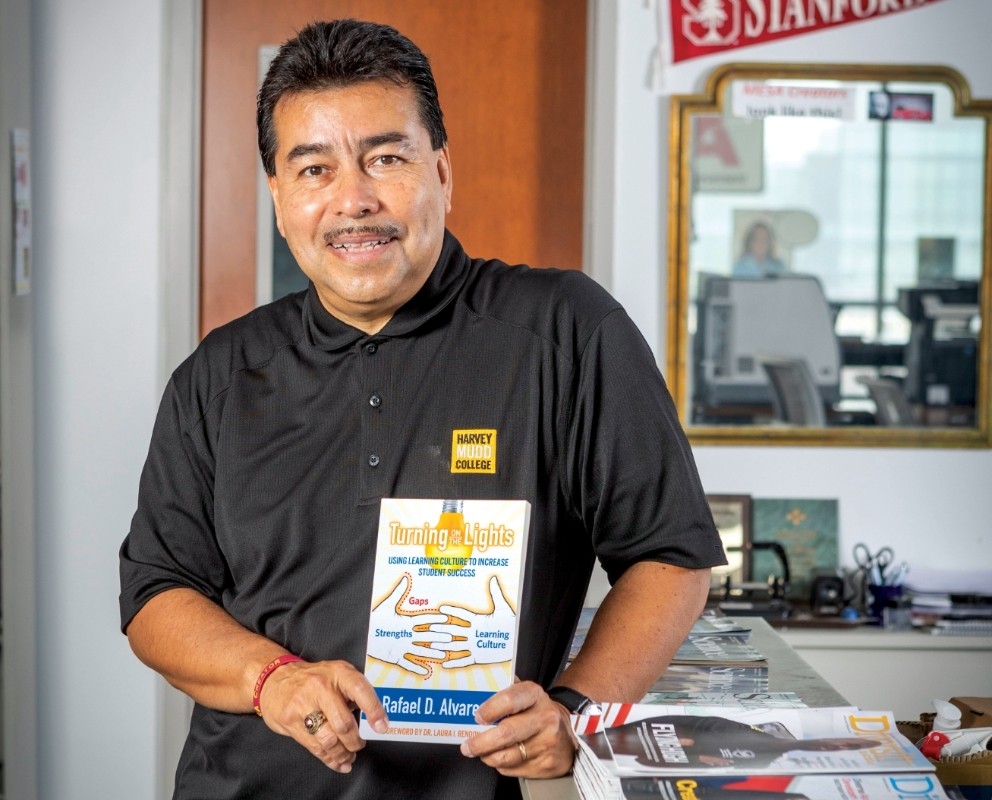 As a child, Alvarez commuted by bus from the working-class neighborhood of Encanto, San Diego, where he lived, to the wealthier, predominantly White part of town where he attended school.

“I say I invented code switching,” Alvarez says, laughing. “During these very important developmental years, the environment on the bus was about survival, and it was a different type of survival in the classroom.” Alvarez looked at each day like a fight to understand and then apply one set of cultural norms among his neighborhood peers and another among his advanced placement classmates at school.

When he became a student at Harvey Mudd College, Alvarez found himself in an entirely new arena with a culture of its own. A first-generation college student, Alvarez found that even his college-prep high school (from which he graduated as one of 13 valedictorians and the only Latino valedictorian) hadn’t prepared him for the culture shock of HMC.

“Learning culture exists in every institution of higher education and includes knowing how to approach the learning and having a mindset for learning,” he says, “yet it is largely unknown to students, particularly first-generation college students, especially historically underrepresented students of color. I got to Harvey Mudd, and there was a whole new fight. I was already used to not having others look like me, but I was in the dark at HMC with regards to knowing and applying the learning culture.”

Indeed, all the points in round one went to Alvarez’s first HMC physics exam. “I’d never had physics before, and I failed. I’m fighting Calculus II, physics mechanics, Chem 200 and Pascal programming. And by the way, there’s an English class and, of course, swim class.”

Alvarez was on the ropes. “I got my butt kicked. I was beat up pretty badly in physics, the lowest score. I told physics, ‘Okay. You got me that time, but you’re not going to get me again.’”

At first, it looked like he had a binary choice: Either work much harder in physics and risk his grades going down in the other classes or “get beat up in physics” and retake it in another semester. But instead, Alvarez became his own corner man, tapping into his boxer’s fighting instinct and refusal to back down. “I came out of that corner, not just fighting physics, I fought every class. I had something inside me. I was not going to back down from a fight.” Alvarez passed all his classes first semester and went on to major in engineering. “I managed it, and I loved it,” he says.

This experience inspired him as he continued in his career, finishing graduate school, working for a while in the defense industry and eventually becoming the founding MESA director at San Diego City College, a Hispanic-serving institution, in 2000.

Everything changed for him and the MESA Program in 2009, when he discovered a research paper on college readiness and success among first-generation students. Through interviews with students, the researchers identified key factors for success, including understanding the college system, college standards and the culture of college. “This was my epiphany moment,” he says.

Alvarez had come to understand the factors for success through his HMC experience, but he knew that students in higher education were not explicitly being made aware of the learning culture. “Why was it necessary for students to fight their way through the dark as I did?” he says. “At that moment, I made it my mission to turn on the lights and transform the lives of my students by training them in the learning culture. All students have many strengths and great potential, but they also have gaps. The challenge is to learn this learning culture and use it to fill the gaps.”

Over the next several years, the success of the San Diego City College MESA program led to invitations from colleges and student organizations asking Alvarez to share his insights, to explain how to shine light to empower students with the learning culture. “Sometimes there are the challenges in the mindset,” he says. “Possibly there are challenges in a student’s foundation for learning and knowing how to approach the learning. I validate the students first, and the learning culture facilitates an increased sense of belonging. It begins with having that mindset and commitment and understanding the language of success, including selfadvocacy, emotional intelligence, mental toughness and goal-focus. My MESA Creators also know the secret to success, i.e., they must want it as much as they want to breathe, and they know that the purpose for the learning is freedom, which gives them the ability to define themselves, rather than be defined by others, outcomes or situations.”

In 2021, after receiving the Outstanding Engineering Educator Award from the San Diego County Engineering Council, Alvarez was inspired to take his message to a larger audience. “The award inspired me to bring the learning culture revolution directly to students through Turning on the Lights,” he says. “This is truly more than just the idea of something, it’s a roadmap to something. This effort is a personal mission to fight for the success of students, but it is also a matter of equity and social justice. We are products of our environment, and the time has come to switch on the lights for students to make the learning culture a part of their environment. All students have the right to succeed.”