This structural engineer is strengthening buildings and the profession itself

Written by Jen A. Miller

Annnie Tran Kao ’02 can’t remember when she didn’t want to be an engineer. As a child, she’d go to the office with her father, a registered civil engineer who worked on infrastructure planning, and do things like “roll blueprints of new products and help him sweep up eraser shavings,” she says. “Sometimes it was just looking at plans and seeing how a city would come together.”

She was so sure of her chosen profession that she started looking into the best engineering schools while still in middle school. Harvey Mudd College stood out and stayed her top choice by the time she was ready to graduate high school, in part because she knew she wanted to do research as an undergraduate. “I loved the idea of experiential learning in the setting of real-world issues, not just passively listening in a lecture hall,” she says. 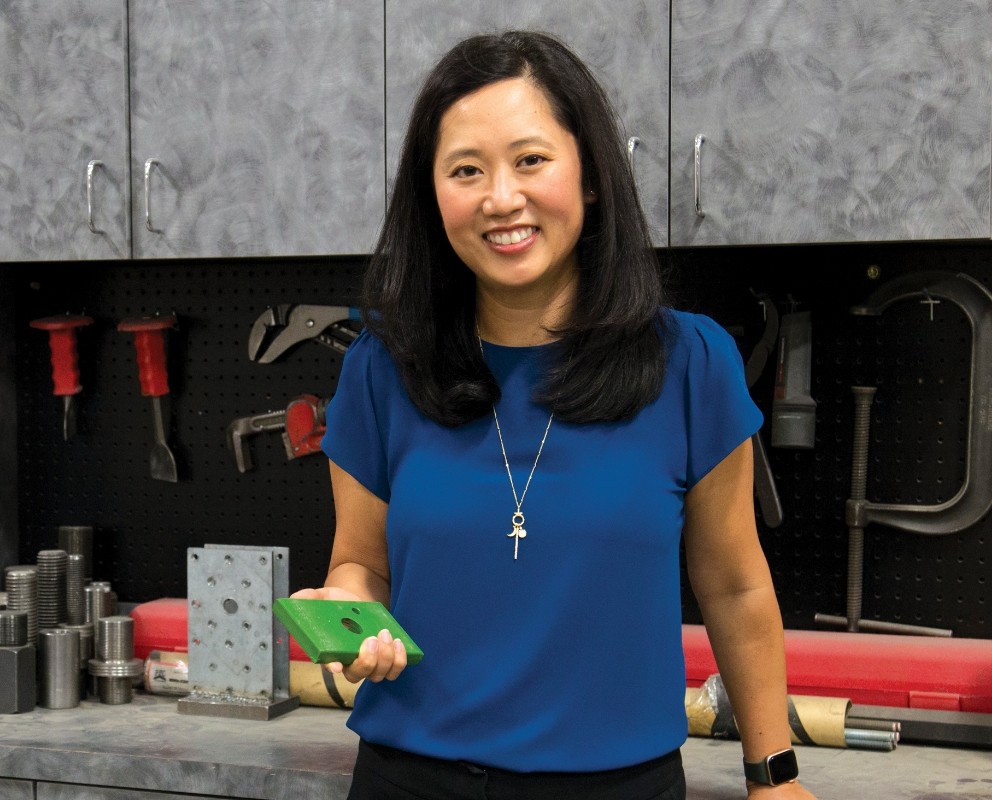 The question Annie Kao ’02 hopes to address through her structural engineering advocacy work is: “How do we help ensure the future of our profession by being able to attract a wide variety of people?”

For three years she worked with Ziyad Durón ’81, Jude and Eileen Laspa Professor of Engineering. “We got to play with fire,” she says jokingly, but for a very important reason: conducting research on how sensors could “pick up vibrations of a building when it’s on fire, and how changes to those vibrations can be a signal to firefighters that they have to get out.”

She’s still focused on safety. After earning her M.S. in structural engineering at the University of California, Berkeley, and working as a consultant for a structural engineering firm, she joined Simpson Strong-Tie, which creates innovative structural products like connectors, fasteners, anchors and component systems that make buildings stronger and safer. These products and systems “really help structures withstand earthquakes, hurricanes and other forces from Mother Nature that try to tear them apart,” Kao says. She started at the company as a branch engineer in Southern California and is now vice president of engineering at their headquarters in Pleasanton, California.

Kao is also focused on how to attract more people to structural engineering, especially from traditionally underrepresented groups. A 2020 report from the National Council of Structural Engineers Associations found that 24% of structural engineers are women and that 23% are people of color.

To work toward addressing these disparities, Kao is a founding member of the Women in Structural Engineering Committee of the Structural Engineers Association of Southern California. She’s also on the Simpson Strong-Tie Diversity, Equity and Inclusion Steering Committee. In 2019, she received the Barc Simpson Community Hero Award recognizing outstanding volunteer contributions by Simpson Strong-Tie employees, and she was also on the 2019 Girl Geek X ranking of top engineers.

The big question she hopes to address through this advocacy work is: “How do we help ensure the future of our profession by being able to attract a wide variety of people?” Kao wants to reach kids who were like her younger self, with a spark of curiosity about math and science and a desire to know how things are put together.

She knows she was lucky to see someone like herself in the role through her father, a Vietnamese refugee. She wants more women and children of underrepresented groups to “see themselves as engineers, architects, building officials and other construction professionals who can shape their cities and communities,” she says.

This isn’t just a nice thing to do but crucial as it becomes harder to “hire quality applicants at engineering firms and in the trades, because recruitment and outreach efforts haven’t been as active as you would hope,” she explains.

Kao has never left Harvey Mudd far behind. From 2013 to 2015, she served on its board of trustees. She also married a classmate, Sean Kao ’02. The two met in front of an engineering professor’s office. “We have three future potential Mudders,” she says, referring to the couple’s children who, if they show the same spark as she did rolling blueprints in her father’s office, will be encouraged to figure out how things work, too.