The Makerspace in Action

Ideas, imagination and innovation are taking flight on the ground floor of the new Scott A. McGregor Computer Science Center.

Machines and materials in the new makerspace and adjoining shops are available to students working on projects for classes, clubs and personal passions, from airplane wings and hammers to rockets and skateboards.

The makerspace encourages interaction among students from all disciplines and welcomes students from all of The Claremont Colleges. It encompasses a lounge, small meeting spaces, 3-D printers and laser cutters, welding and painting booths and open space for large projects. The student machine shop and wood shop have been relocated so that they are just across the hall from the makerspace. 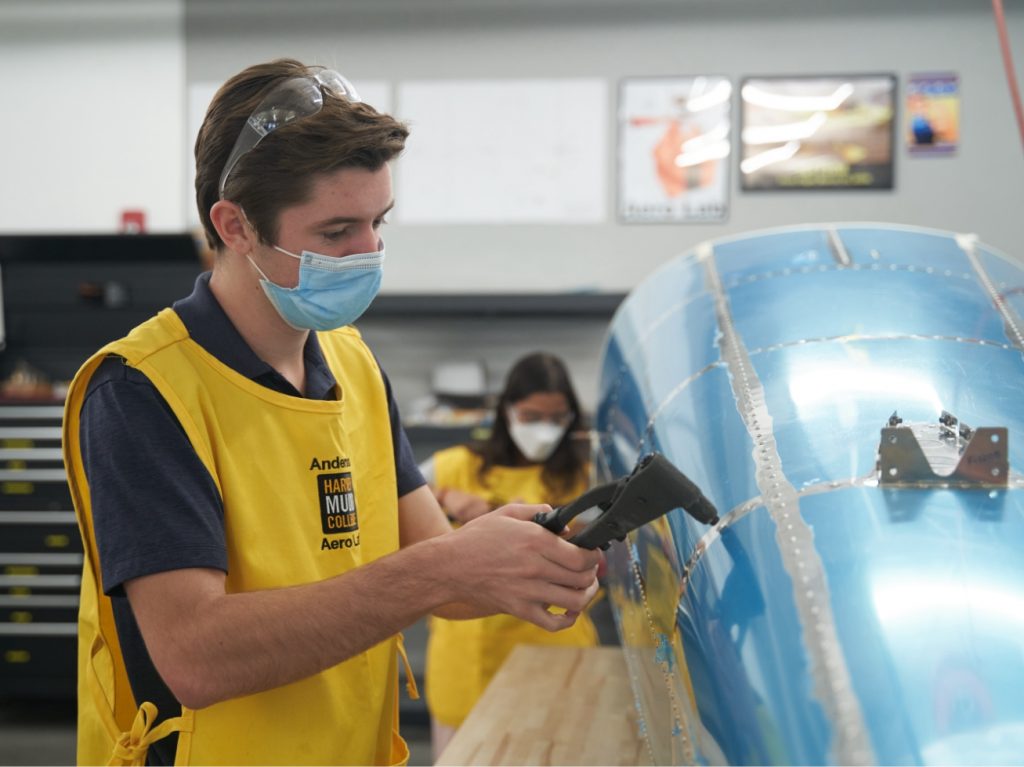 Domenico Ottolia ’22 pulls a pop rivet on the tailcone of the Vans RV12iS airplane being built in the makerspace.

“One of my favorite things to watch is an art student next to an engineering major next to someone interested in architecture all using the same piece of equipment in a totally different way and inspiring each other,” says Drew Price, machine shop manager. “Creativity comes from people of different backgrounds learning from each other and using the space together.”

Alongside a director and manager, the makerspace is run by a team of student stewards. They are experienced in operating the various tools and machinery and train and encourage other students who need help. The stewards are also responsible for hiring and recruiting and get involved in budgetary decisions.

“Big resonances come from the student workers who are teaching peers what they know and exploring together how they can figure out how to do something they don’t quite know how to do yet and reinforce learning opportunities when something doesn’t go quite right,” Price says.

Ava Fascetti ’23 is a student in Introduction to Aviation, a new course being taught this fall by engineering professor David Harris. Twelve students and four proctors are working in HMC’s new makerspace to build a Vans RV12iS airplane.

Students are able to use most machines independently after completing training or getting direction from a steward. While the makerspace is open 24/7, with stewards available in the afternoon and evenings, the machine and wood shops and welding machines are closed during non-staff hours for safety reasons. Safety issues in some makerspace workrooms demand that students pass a safety test before they are given card access.

Kim Neal, the makerspace manager, has found the experience invigorating. She loves to hear the students interact and share their ideas and enjoys talking to them about their projects. The Friday before Halloween, the makerspace was humming with at least 20 students working on costumes. “The best one was Bowser, a boss in the Mario Bros. video game,” Neal says. “They had a giant horned shell on their backpack. It looked really fantastic!”

Other recent projects created in the makerspace have included skateboards, parts for the MuddSub robot, rockets, and printing plates created with the laser cutter and resin printer. Felix Murphy ’24, one of four head makerspace stewards, says the neatest thing he’s seen is a shopping cart in the electronics studio with various devices strapped to it. “I’ve seen it randomly wheeled around different places on campus, and I really want to find out what that project is,” Murphy says.

While some of the machines can be daunting, Murphy says most students he’s met are excited and willing to move out of their comfort zone. “Once students realize the whole makerspace is designed to keep them safe and stewards are here to help them out as much as possible, almost everyone is willing to try,” he says.

Murphy, who spends most of his time in the makerspace, is creating workshops where students can create quick and easy projects in 15 to 20 minutes to introduce them to the possibilities of the makerspace.

Machine shop proctor Sidney Taylor ’23 encourages students to visit the makerspace complex even if they don’t have a project in mind; they can start by getting comfortable with the machines and figuring out how they work. Taylor has some designs brewing for a handle to attach to freeline skates to make it easier to carry them around campus. She’s also working to master the ProtoMAX waterjet cutter, a machine that can cut metal and other material.

Jeff Groves, Louisa and Robert Miller Professor of Humanities and makerspace director, has heard from alums who are interested in coming back to the College and doing a project in the makerspace. Alums are welcome, Groves says, if their work doesn’t interfere with student use of the space.

Groves believes the makerspace and shops will eventually become a seamless area for creativity and making where students will move from space to space building projects for classes or for meeting their personal interests. Based on current usage of the makerspace, that evolution is already beginning.