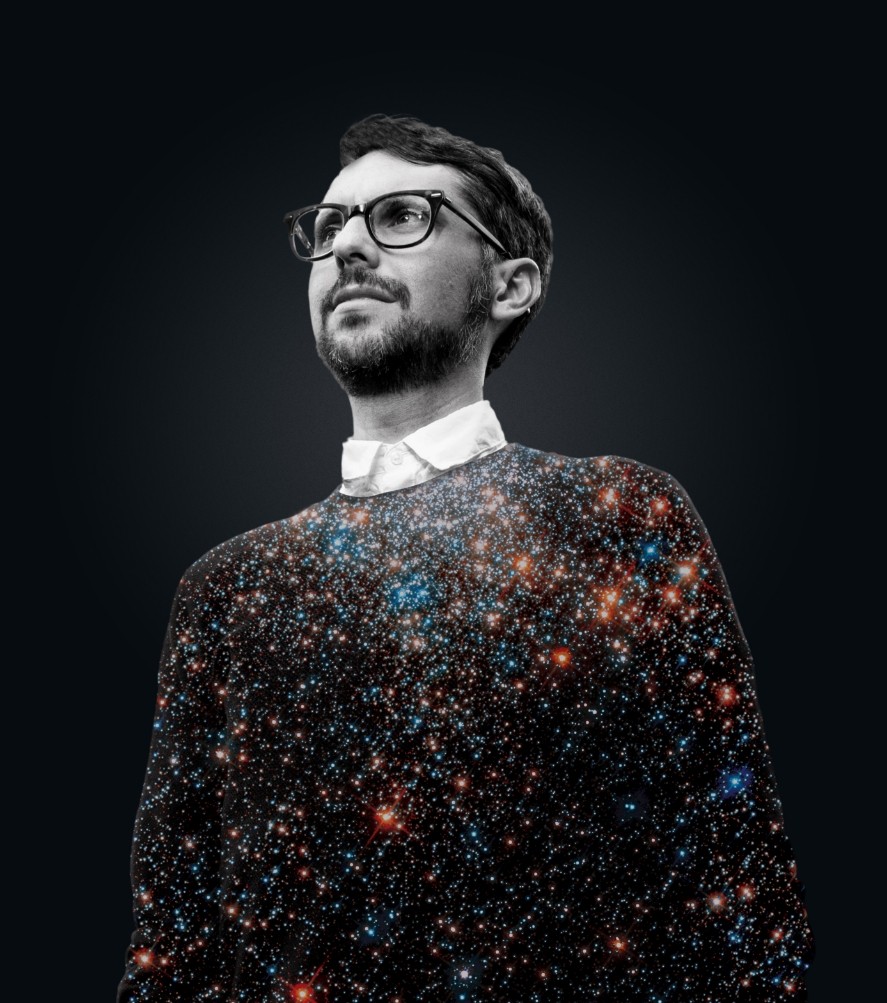 A passion for astronomy and science communication converge for Kevin Hainline ’06, a member of the James Webb Space Telescope team.

Astronomer Kevin Hainline ’06 is excited— really, really excited. A self-described “black hole hunter,” he is having the time of his life.

In ordinary times, Hainline, an assistant research professor in the University of Arizonas’ astronomy department, would merely be pioneering new ways to find and catalog quasars, the gravity-sucking, deep-space vortexes at the centers of supermassive galaxies.

Instead, these days he pulls all-nighters as a member of the Near Infrared Camera (NIRCam) team on the James Webb Space Telescope (JWST). The instrument, two decades in the making, orbits a million miles from Earth behind the Moon. It is the most powerful telescope ever built and will soon begin peering back to nearly the beginning of time—13.5 billion years ago—further back than humans have seen.

In February, Hainline and his Tucson, Arizona, colleagues were in the “commissioning” phase for the telescope, a process that involves going through every instrument and mode on the JWST to make sure it works as it was designed. One of the tasks is aligning the 18 hexagonal gold-plated honeycomb arrayed mirrors—a one-month process.

But Hainline, 38, has a parallel passion—communicating the heaven’s wonders to children and adults. With hundreds of planetarium lectures under his belt and nearly 30 YouTube offerings, he spent years making a madcap, eye-popping video to explain JWST’s purpose. (Hainline got his high-wire public speaking start—and introduction to comedy—in the Harvey Mudd improv group Without a Box.).

In This Is A Film About The James Webb Space Telescope, Hainline explains complicated science in lay terms. Of the mirrors, he exclaims as he floats beside the telescope, “They’re 21.3 feet across. That’s three Shaquille O’Neals! That’s almost four refrigerators! That’s an adult giraffe! That’s six R2D2s stacked on top of each other! That’s the size of George Washington’s nose on Mt. Rushmore!” To add to the fun, his singer-songwriter wife, Lara Ruggles, appears in the video. She strums power chords in a sequined country-western outfit, and astral music pioneer Laraaji, clad in an orange jumpsuit, poses the question: “What sort of space light is JWST going to observe?” “I’m glad you asked!” answers Hainline, who goes on to explain.

Once the mirrors are set, NIRCam will see infrared light from the remotest, earliest galaxies. Because they are hurtling away so fast from Earth, the wavelengths of their light have elongated into the infrared spectrum, which is invisible to human eyes. Less powerful telescopes like the Hubble, which uses ultraviolet, visible and near-infrared light, have been unable to detect them.

Using NIRCam, Hainline will do something he has never done before—find these new galaxies as a part of one of the telescope’s first missions—the JWST Advanced Deep Extragalactic Survey (JADES).

“I’m giddy!” he says. “Now we’ll see things no one’s ever seen before. It’s the greatest privilege of my life. We are going to trace how the universe built us atom-by-atom in a way we’ve never been able to do.

“We’ll take the galaxies and line them up by their distances away from us stretching back into the past. That’s a real miracle, a moment of just sheer, jaw-dropping wonder, seeing the blueprints of the complexity of the modern universe in the nascent baby universe!”

“Many people are good at science communication,” she adds. “But what I find really impressive about Kevin is that not many people conduct cutting-edge research, make JWST happen and do substantial outreach at the same time.”

While working on his PhD at UCLA, he gave hundreds of free shows at its planetarium and co-founded UCLA Astronomy Live, which sends speakers to schools. Later, as a postdoctoral researcher at Dartmouth, he volunteered at a nearby science museum and went “up and down” Vermont and New Hampshire visiting classrooms.

“By definition Kevin is an astronomer, but he’s also a person looking for ways to experience life,” says Marcia Rieke, the University of Arizona astronomy professor who has spearheaded the NIRCam project the past 20 years.

“I’ve always really, really cared a lot about sharing astronomy with people, because it’s something that doesn’t only belong to academics. It’s something at everyone’s core,” says Hainline.

He means that literally. “I’m composed of seven billion, billion, billion atoms, a big number, and these atoms are carbon, hydrogen and oxygen. It’s kind of trite—that we’re made of stardust, right, this Carl Sagan thing,” he says.

One of his childhood idols is the very down-to-earth Mr. Rogers. His other childhood hero was Data, the android on Star Trek: The Next Generation, who Hainline says was the most human of all of that show’s characters.

“Star Trek represented a place where people cared about each other. I thought of them as my space friends. Look at me now,” he says. “I work with NASA, and it all comes from being a kid and having an outlet like Star Trek that taught me it’s okay to like these things and that you will find people in your life who will support you when you are excited about science.”

Humanity’s final look at the James Webb Space Telescope as it heads into deep space to answer our biggest questions. This image was captured by the cameras on board the rocket’s upper stage as the telescope separated from it.

Among the JWST’s many missions over its estimated 20-year lifespan, it will examine the atmospheres of bodies orbiting distant stars to see if they resemble Earth’s. “If we find an exoplanet atmosphere with oxygen, nitrogen, water and so on, we’re going to be highly suspicious,” says Rieke.

When Hainline is not singing the praises of the stars, he’s a tenor in the choir of his Presbyterian church. On a recent Sunday, he read to the congregation Psalm 8, which contains one of his favorite passages: “When I look at your heavens, the work of your fingers, the moon and the stars that you have established; what are human beings that you are mindful of them, mortals that you care for them?”

In addition to Hainline, a number of other HMC graduates have worked on the James Webb Space Telescope during their careers. Here are a few physics graduates who describe the role they played in the telescope’s development.

Barto is a director at Ball Aerospace, specializing in developing complex space systems from vision to orbit. She spent 17 years in both technical and leadership roles for the JWST, where she led the team responsible for design and delivery of the optics and electronics for the 22-foot-wide telescope as well as for the overall optical design, verification and on-orbit optical phasing and commissioning of the observatory. Barto began working on the program in early 2002 prior to formal program award and began her time on Webb conducting early design trades on segmentation and actuation architectures.

In 2014, she was honored with the Women In Aerospace Achievement Award for her technical contributions to the Webb Telescope optical verification and test approach. In 2017, Barto and her team were honored with the Aviation Week Program Excellence Award for work on Webb’s cryogenic electronics system. Barto managed the program at Ball Aerospace through hardware delivery, telescope-level integration and final optical testing at Johnson Space Center. In 2019, after the Ball-built hardware had completed performance testing, she moved on to other endeavors, but remained involved with planning for future large, space-based observatories.

Barto was part of NASA’s recent in-Space Assembled Telescope Study conceptualizing in-space robotic assembly of telescopes up to 20 meters in diameter and is part of the follow-on SMART Think Tank on in-space servicing, manufacturing and assembly.

A systems engineer at Northrop Grumman, Basgall supported the JWST program as a risk manager, responsible for working across the NG team to document potential risks to meeting cost, schedule or technical requirements, and then developing mitigation plans to reduce the risk level. She says, “While my role wasn’t as glamorous as designing, building or testing the actual space vehicle, I am thrilled to have been a small part in the very large program. While everything is going so well, I will be biting my nails until we see it fully operational.”

Carlson was the telescope integration and test lead, working for Northrop from 2002 to 2008. He did a lot of early planning of facilities to be used and transport methods. His team worked on assembling the major sections of telescope structure, adding the individual mirrors, installing the integrated science instrument module and testing the entire telescope on the ground, and then handing the completed telescope off for observatory-level integration with the sunshield and spacecraft.

He says, “The early days of the program involved a lot of exciting engineering trades and major program decisions. Among the first was deciding between 36 smaller mirrors or 18 larger mirrors, and glass or beryllium mirrors. Manufacturing, polishing and coating glass was very proven, but making glass stable at low temperatures was not; beryllium won. The work to polish beryllium was estimated to be more straightforward engineering than making glass stable at very low temperatures, though beryllium optics at low temperatures were hardly common. Subscale tests were performed, the chamber at Marshall Space Flight Center that had been built for Chandra testing was upgraded with helium cooling shrouds for JWST testing.”

Other decisions to be made were, how to cool the mid-infrared instrument (MIRI), which Carlson considers the most exciting part of JWST. “The primary instrument, the NIRCam, is built to image the first light of the universe, as is the telescope itself, but the MIRI will be looking in wavelengths that are practically unstudied. JWST will be able to focus itself on orbit, but thermal or structural instability could lead it to have to focus too often, putting heat into the telescope from mechanisms, driving further instability and eliminating the possibility of achieving the mission.

“JWST has certainly been expensive, but it leaves in its wake world class facilities that have been upgraded for use by other programs and commercial space, as well as many other spinoffs. Navigating the program through those challenges and replans was a master class in program management,” Carlson says.

During 1997–1998, Love worked as a staff engineer at the Jet Propulsion Laboratory in Pasadena, California, just down the road from HMC. One of his assignments was to develop and improve optical ray-tracing models for instruments on future spacecraft, including the Webb telescope. “Twenty-five years later, it’s actually flying! Although my role in it was very preliminary and very small, I’m proud to have helped with this amazing project,” he says.