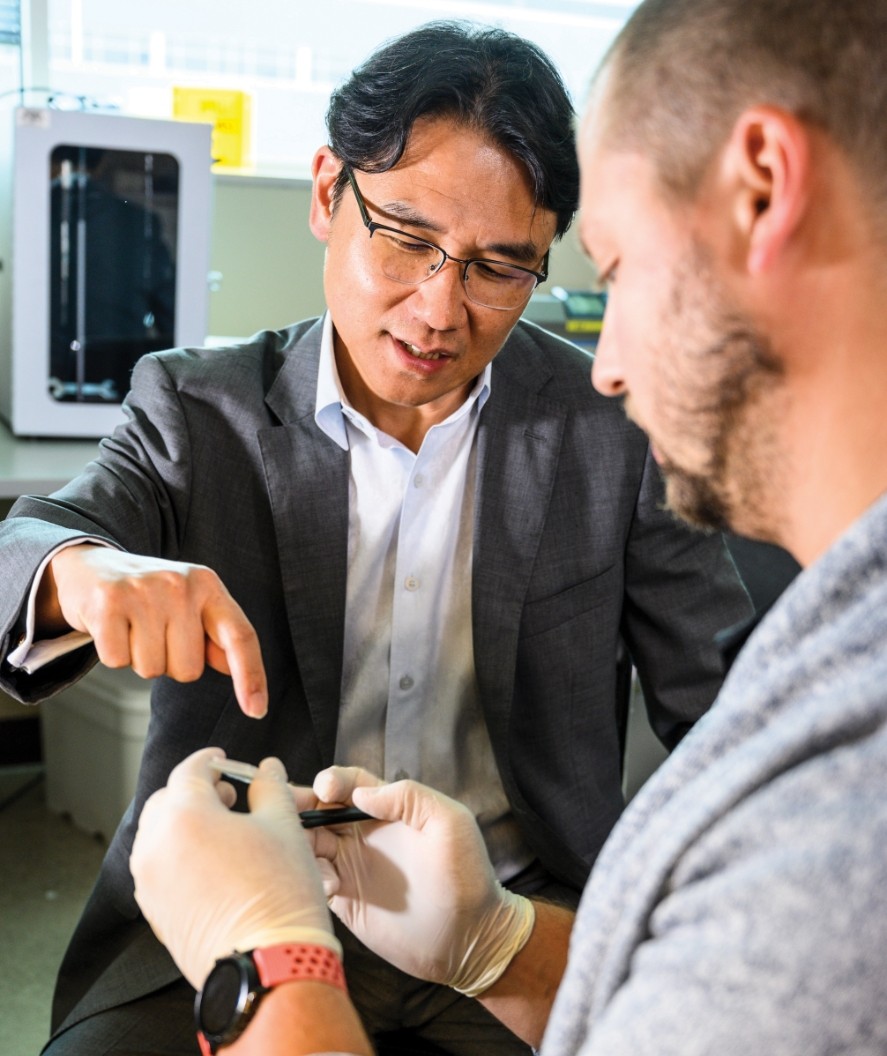 There’s no missing the mission statement of GoDx on the company’s homepage. Emblazoned in large letters at the top of the screen is the declaration, “WHY WE EXIST: Our team believes that all humans have the right to know their health now.” 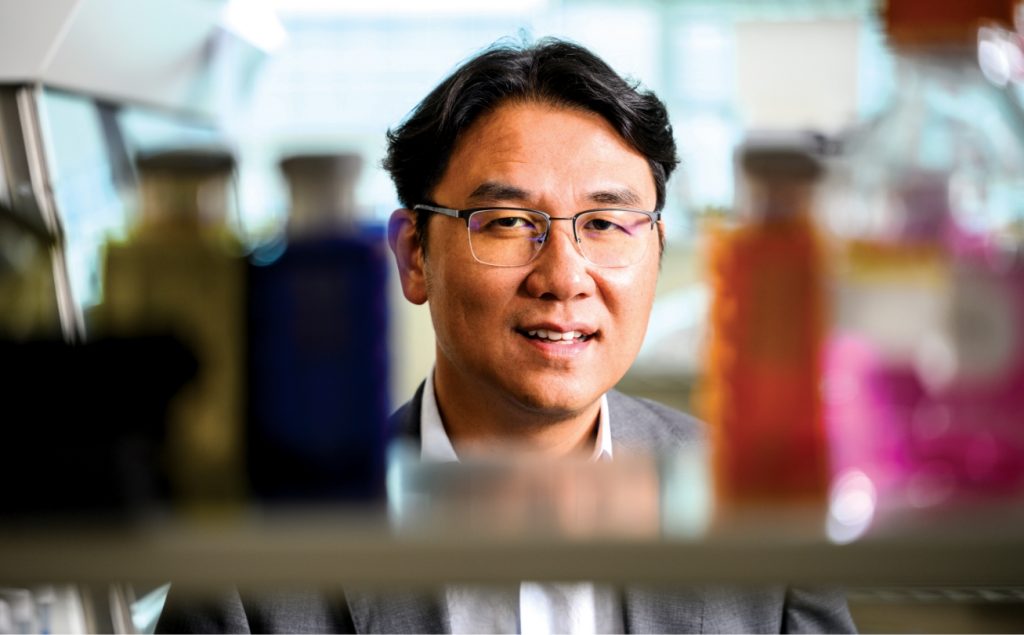 Kim originally launched GoDx to identify the most common pathogens that cause diarrheal diseases in order to speed up proper treatment. Globally, 2.2 million people die each year from gastrointestinal infections; they’re the second most-common cause of death in children. “My wife, Sarah Kim, and I attended a church mission conference in 2010 where people were using their businesses to help in the developing world,” he says. “I thought I could use my expertise in diagnostics to save lives and improve health.”

It was a noble intention and connection that Kim had recognized as early as high school. “I noticed that many of the people who won the Nobel Prize for chemistry worked in medicine or biology,” he says. “I wanted to study chemistry because I felt most biology problems can be solved through chemistry.”

Method of detecting nucleic acids using three-dimensional paper microfluidic devices: Sample is loaded on the one dot on the left. It is dispersed into seven different locations for the multiplexed detection of seven pathogens and one location for the control.

He set his sights on Harvey Mudd’s chemistry program. “My high school chemistry curriculum, CHEM Study, was created by J. Arthur Campbell (founding faculty/professor of chemistry),” he says. “That’s how I heard about the school and even about the bumper sticker, ‘Honk if you passed P Chem.’ I wanted to get that bumper sticker from Professor Van Hecke.”

He took away from Harvey Mudd far more than just the bumper sticker. The school’s mission to develop leaders who are socially responsible resonated with him, and he developed a work ethic and innovative mindset that have served him well as a bioentrepreneur.

“Harvey Mudd builds more than just knowledge,” he says. “It builds creativity, persistence and grit.” The cross-registration system at The Claremont Colleges—which allowed Kim to take a broad selection of courses in humanities and social sciences— and social interactions with liberal arts majors, helped him become well-rounded, socially aware and responsible. “My favorite class was Professor Warner’s 19th century Russian literature at Claremont McKenna College, although I didn’t pursue it because I got a B+.” Kim minored in economics and was influenced positively by Professor Gary Evans’ meetings about bioentrepreneurship.

After graduate studies in biochemistry and genomics at Caltech, Harvard and MIT— including a Howard Hughes postdoctoral fellowship in Nobel laureate Professor Jack Szostak’s lab at Harvard—Kim spent seven years as a scientist and team leader at the National Institutes of Health (NIH). He transitioned from bench work to applied and clinical research and further honed his genomic and diagnostic skills.

In 2010, he entered the startup fray and joined a Caltech classmate at DxTerity Diagnostics in Los Angeles. During his time there, he sharpened his commercialization and product development acumen as the company went from zero to $50 million in government contracts for its radiation exposure blood tests.

In 2017, GoDx opened for business in Madison, Wisconsin (where Professor Hal Van Ryswyk, Kim’s research advisor for four years, received his PhD). “We get so much more press and attention here than we would in California,” Kim says. Indeed, he has won several Wisconsin state grants since launching the company and was recognized this year as one of the 56 top pharmaceutical startups and companies in Wisconsin.

Kim entered into a cooperative research and development agreement with the NIH, a collaboration between the government and the private sector that facilitates the development and commercialization of health care pharmaceuticals and products. “It gave us a lot of credibility and resources because we had access to the NIH labs and staff,” he says.

Through his participation in the NIH’s 10-week Innovation Corps, he interviewed 100 potential customers to better hone his product to fit market demands. He secured both Phase 1 and Phase 2 Small Business Innovation Research grants from the NIH’s National Center for Advancing Translational Sciences (NCATS), invaluable funding for improving his testing technology.

“For our GO-GutDx, we invented a new isothermal method for amplifying the DNA and RNA in stool,” he explains. “It doesn’t require an expensive machine or thermal cycling like polymerase chain reaction does. It’s very low-cost and fast, so it’s very well suited for the developing world.”

A University of Iowa researcher is using GO-GutDX in a clinical study of children in Kenya, and Kim has applied for a grant to conduct his own larger study in Kenya. He’s also seeking certification of GO-GutDx by the Centers for Medicare and Medicaid Services’ CLIA Program so it can be used as an approved lab test domestically, especially for C. difficile, a common diarrheal infection in U.S. hospitals.

GoDx has other products in development: a sepsis test for the U.S. Navy and an STI test, both funded by the NIH’s National Institute of Allergy and Infectious Diseases.

When the pandemic erupted in early 2020, Kim realized that his paper diagnostic tools could also be adapted to detect COVID-19. He received a supplementary $800,000 SBIR grant from NCATS to develop GO-COVIDx. “We were running out of supplies and worried that our office would be shut down, but we just kept working,” he says. His team’s dedication earned them a spot in a “Heroes of the Pandemic” calendar issued by a local charity.

After a successful clinical study at the Medical College of Wisconsin, GO-COVIDx is currently under review by the CLIA Program. Kim aims to roll out the certified GO-COVIDx through labs and through mobile testing to reach remote areas as well as serve schools as they start the new academic year. “We’re hoping we can help out by taking our test to them,” he says.