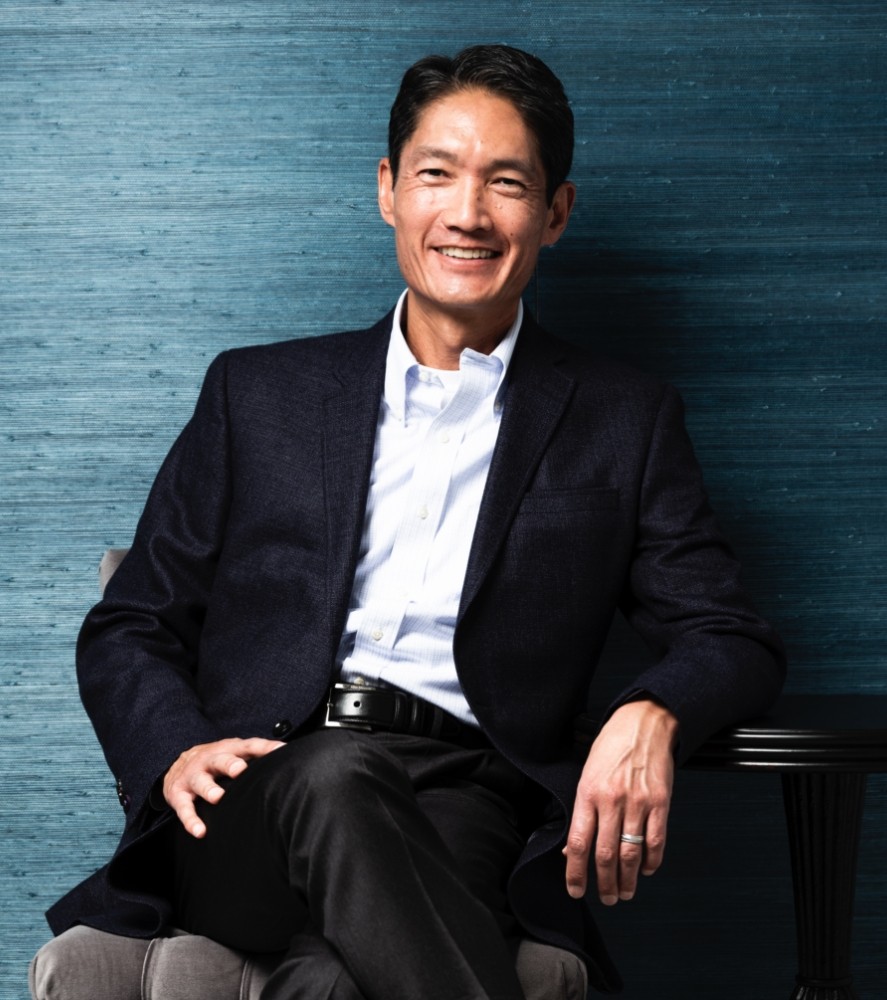 Written by Jen A. Miller Photo by Marc Montoya

Kenji Hashimoto ’91 is the first to admit that, while he was a pretty good tennis player in college, he was not the best physics student.

During his sophomore year at Harvey Mudd, his second on the varsity squad, he was struggling with his linear algebra class. He went to tennis practice anyway. Hank Krieger, a professor of mathematics who was also the tennis coach, pulled Hashimoto aside.

“I hear you have a midterm in linear algebra tomorrow,” he said, as Hashimoto recalls. “I also hear you’re not doing very well.” Hashimoto might have expected a lecture. Instead, Krieger told him to just do his warm up, then go back to his dorm and study. When he was a senior, he struggled with quantum mechanics, and John Townsend, then chair of the physics department, offered to help him two days a week so that he could pass the course.

“At HMC, I learned the importance of balance, time management and a broad education.”

“That never would have happened at a Division I school or even most Division III schools, but the fact that they knew and cared—to me, that sums up my HMC experience,” says Hashimoto, who not only played on the varsity squad all four years but was also captain his junior and senior years when HMC won the Southern California Intercollegiate Athletic Conference and reached the semi-finals of the NCAA tournament.

Tennis was “really competitive and interesting and stressful, and we traveled a lot, but at the same time, it wasn’t our entire life,” he says. “At HMC, I learned the importance of balance, time management and a broad education.”

That’s served him well in his career, which has led him from the nonprofit sector to his current leadership role at Amazon.

While still in college, in 1990, Hashimoto started working for the newly founded Teach For America. He helped run the organization’s first-ever Summer Institute to train teachers. After graduation and two years working as a consultant for Accenture, he went back to Teach For America full-time, but not to work in the classroom. Instead, he helped run “every single back-office function. I got to run finance and human resources and technology and all the stuff a nonprofit doesn’t want to handle,” he says. It gave him a front-row view of what it takes to make an organization run and grow.

He translated that experience into an MBA from Kellogg School of Management and then into a position at American Airlines, where he would stay for 22 years. He started as an analyst and worked his way up to senior vice president for finance and corporate development. Hashimoto spent about half his time in finance, with six years in commercial roles and six years in operations.

When U.S. Airways and American Airlines merged in 2013, Hashimoto was responsible for overseeing the reorganization of US Airways Express and American Eagle regional flight services, which included more than 600 aircraft on 3,500 flights. His role was to “set a vision and support my teams to deliver all the pieces.” From there, they could focus on first-class service, Wi-Fi on airplanes, seat power and other things that customers desired.

That experience especially prepared him for his job now, he says. As vice president of North America Sort Centers for Amazon, a role he started in October 2020 and expanded to include surface transportation in July 2021, he oversees about 120 Amazon sort centers, which act as a bridge between Amazon fulfillment centers (or warehouses) and whoever will deliver those items to consumers—whether that delivery is done by an Amazon driver or the U.S. Postal Service— along with the large trucks that move those packages between the facilities.

June 2021 was his first Prime Day, Amazon’s version of Black Friday, where the company offers customers with a Prime membership exclusive discounts and deals. At the sort centers, Hashimoto’s job was to “get people excited about serving our customers and making sure that we can get those packages out the door and do it safely,” he says. He admits that he was nervous, but even with the increased sales volume (worldwide, Amazon customers bought more than 250 million items, according to the company), the process was a smooth one.

With his first Prime Day in the rearview mirror, Hashimoto is looking ahead to including more robots in Amazon’s operations. The technology will meet the specific needs of Amazon’s sort centers, where all kinds of items of many shapes and sizes are coming through every day. “The technology is really interesting in that it’s different from how a traditional human/material handling sort center works. You can’t really eyeball the floor and know how it’s going,” Hashimoto says. “It’s an exciting opportunity that improves safety for associates and still lets us grow very efficiently.