Members of Harvey Mudd College’s MuddSub robotics team and the Mudd Amateur Rocketry Club (MARC) are eager to get back to campus this fall. Here’s what they’ve been doing over the last year and what they hope to accomplish this academic year. 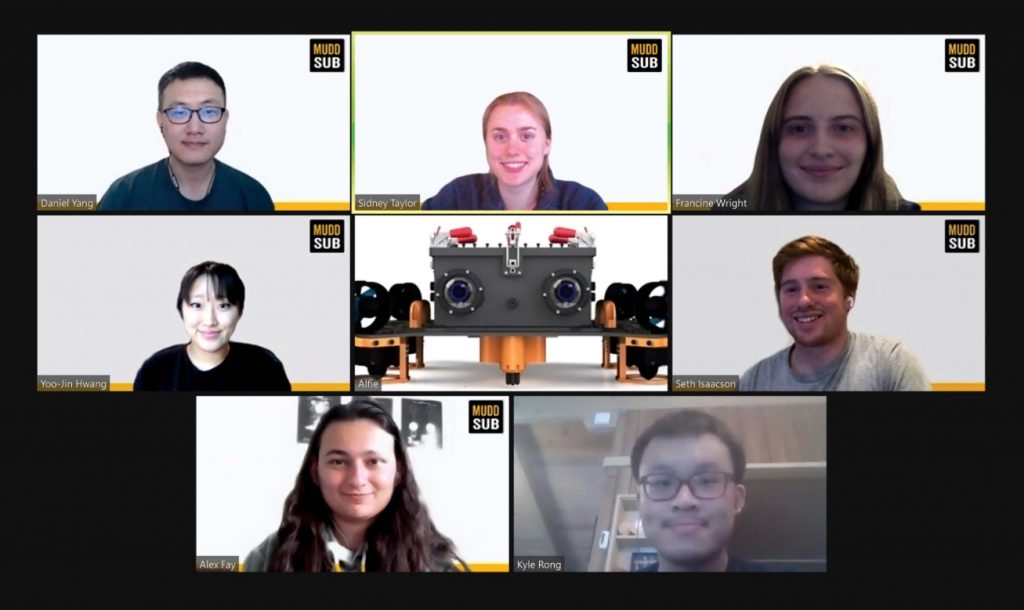 In summer 2021, under the guidance of Zach Dodds, Leonhard-Johnson-Rae Professor of Computer Science, MuddSub members participated in a research experience for undergraduates, a paid research opportunity for students funded by a team sponsor.

Sophomores Francine Wright, James Clinton, Rin Ha and Jordan Stone had access to a backyard pool for their research, which included deploying and testing the systems and code onto the robot, developing a testing simulator and working on acoustical localization (hydrophones).

In August, the MuddSub team entered the Robonation robosub competition, where they received $500 and placed sixth in the sensor optimization skills video category and second in the website category (MuddSubb).

MuddSub leadership has clear plans for the fall semester, which will mark the first time the team will meet in person and on campus since March 2020. The first order of business, says MuddSub co-president Daniel Yang ’22, is recruitment. “A lot of technical university organizations require some sort of skill-based interview to vet potential members. We decided that our organization wants to accept as many new members as possible.”

Team solidarity is another focus for MuddSub leadership, which is planning social events and gatherings, some of which will include the MuddSub alumni network. On the technical side, the team is excited about conducting underwater testing in the tank on campus. “During the online semesters, our team has been unable to physically test our robot in an underwater setting,” Yang says. “We hope to hold in-person pool tests, if possible.”

Looking ahead to the summer 2022 robosub competition, the team is building a new robot, which they will deploy along with the current sub.

The overarching goal of MARC (Mudd Amateur Rocketry Club) is to develop organizational sustainability. Edward Jacobs ’22, the team’s chief engineer, hopes to lay the groundwork for rocketry at Mudd so that it is “something that persists and takes relatively little time outside of class to keep the main functions going.”

In addition to building organizational integrity and longevity, MARC members spent last academic year and the summer designing a high-powered rocket. This fall and spring, they hope to build the rocket, which they will launch in summer 2022 at the Spaceport America Cup, the largest intercollegiate, international rocket engineering conference and competition.

MARC members are eager to begin their in-person weekly build sessions on campus with the objective of helping club members achieve their national, level 1 rocketry certification. “[Level 1 certification] is the first thing that we ask students to do because it’s a small project, you can put in as little or as much time as you want into it, and it’s something that’s very personally rewarding,” says Jacobs. “For me, and for all the students that I’ve seen launch rockets, afterwards we’re glowing.”

Other objectives for the fall include finishing building the club’s website and expanding MARC’s membership to more students from other Claremont colleges. “This isn’t just a Mudd thing,” Jacobs says. “You don’t need to be an engineering major to participate in this, you just need to be interested in rocketry. And that’s one of the joys of it: Even if you have zero experience with rockets, as long as you’re interested, we can work from there.”

My Year Before Mudd