Communicating mathematics in a way that is exciting, relevant and inclusive is a goal of Heather Zinn Brooks, assistant professor of mathematics. As an applied mathematician working in complex and nonlinear systems, she studies a variety of social and biological systems with mathematical models. 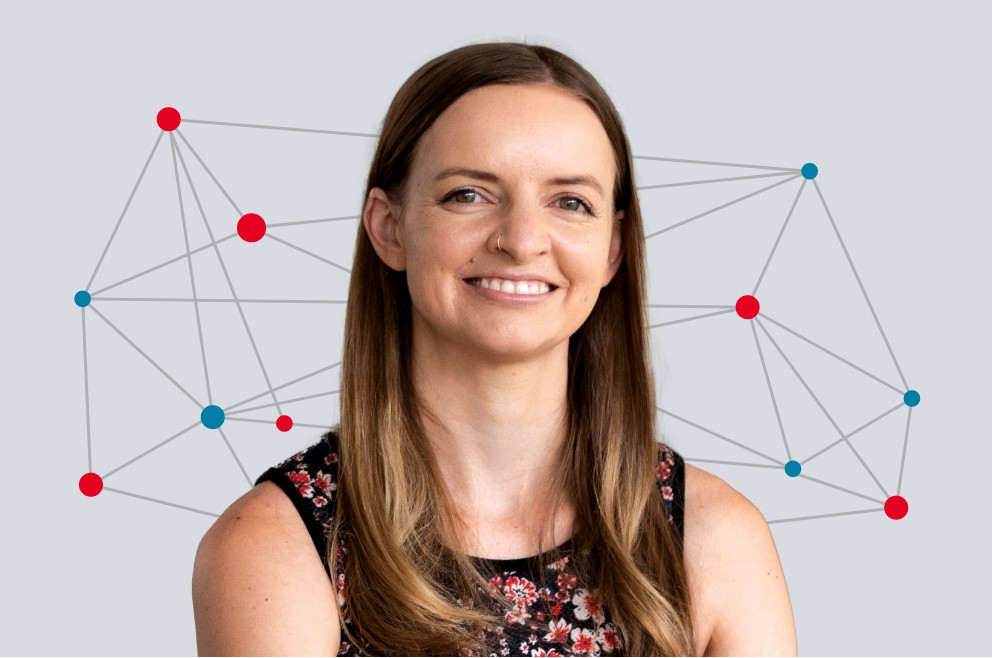 In January, she co-organized the online, well-attended international 2021 AMS Short Course Mathematical and Computational Methods for Complex Social Systems, a gathering for those seeking to gain a better understanding of how interacting parts in a system—like Twitter accounts, pedestrians or voters—respond to each other and to their environment and how this impacts society.

How do you define complex social systems?

Technically, a complex system is one that consists of many interacting particles or agents, for example, a flock of birds. Each individual bird has its own behavior, its own set of rules that it’s following, but if you zoom out, then the flock moves together and creates patterns—a beautiful example of a complex system. Complex systems are applicable to many real-world applications, like cells, human brains, voting, disease spread, climate and social networks (my interest).

What was the impetus for the AMS course?

I co-organized the workshop with three friends and collaborators: Alexandria Volkening, a postdoc at Northwestern University, Mason Porter, a professor at UCLA, and Michelle Feng, a postdoc at Caltech. It came out of a 2018 conference session, “The Dynamics of Democracy,” that Alexandria and I organized during which speakers discussed gerrymandering, election forecasting and opinion dynamics. We realized there was this real hunger among math people to learn more about how to use math to study social systems and what work was out there to study social systems with math. So, we hatched a plan to keep building up this community within mathematics.

How does your specialty fit into this community?

I do math modeling of complex systems. I’ve recently been really interested in mathematical models of opinion dynamics. I bring together tools from dynamical systems—basically studying systems that change in time—with ideas from networks. The network piece is really interesting when you’re thinking about mathematical modeling of opinion dynamics because networks give us a way to think about connections between people or social entities.

The focus of my talk for the short course was a whirlwind tour of the mathematical techniques that mathematicians who study networks use and to highlight what’s special about social networks. When we think about networks, we think about these agents or particles in a system being connected in a very specific way; we actually model the connections. You can study a lot of the features of the structures of networks, whether they’re networks that are from a social system or not.

I think Twitter is a wonderful example to talk about the notion of degree of the network. Degree is a way to measure the importance of nodes (the individuals in our network). On Twitter, that’s accounts. We could use something like degree to try to quantify the importance of an account on Twitter; perhaps importance is somehow proportional or relative to how many followers you have. For example, Dionne Warwick’s Twitter account has many Twitter followers. You could then compare that to something like the Twitter account of Harvey Mudd College, which has many followers but orders of magnitude less than Dionne, and then compare that to my Twitter account, which is orders of magnitude less than that.

Something that is special about social networks is that it’s very common to have a lot of nodes (accounts) that have very few followers. The distribution would show a steep drop off, but then a really long “tail,” with just a very few accounts that have a huge number of followers in networks. We call this a heavy-tailed distribution, one signature feature of social networks.

In your Harvey Mudd classes, how are you linking course content with real-world applications and current research?

I’m excited to do this in the fall when I teach a class called Mathematics of Democracy. We’ll explore how mathematics illuminates, informs and impacts the democratic system in the U.S. It will include reading and discussion of state-of-the-art mathematical research on topics surrounding the democratic system: apportionment, voting theory, election forecasting, judicial system, social movements. I’m hoping to get some great guest speakers.

This topic is such an exciting area of applied math research and the cool thing is students can see what’s happening right now. In mathematics, a lot of what we do in the undergrad curriculum is very old; 100 years old feels new in mathematics. This is an area of mathematics where students can read and engage with the what’s coming out this year.

I have had a longstanding interest in politics, but it took a long time before I realized that I could combine politics with mathematics. You can learn so much from talking to people outside your area and sometimes you find really surprising connections. This is part of the reason it’s great to be at The Claremont Colleges. We have this whole community that’s really passionate about a wide range of things; it’s the perfect place to get out of your bubble and follow what’s interesting to you.