Writen by Jen A. Miller

Anne Hofmeister ’76 still consults her first-year physics textbook: Fundamentals of Physics, by David Halliday and Robert Resnick. A pioneer in measuring heat transfer and challenging the status quo about how earth materials operate and how planets form, Hofmeister is quick to credit her time at Harvey Mudd College for having shown her the nuts and bolts of her profession. “I was taught to look at the basics, to look at assumptions and do my homework and to understand things from the bottom up,” she says.

Hofmeister chose Harvey Mudd because she wanted to go to a small science school, “and California was very appealing,” she says, and very different from her home state of Ohio.

She was one of the few women in the physics department at the time and would often be the only woman in the room throughout her career. When describing Mudd from the 1970s, she said it was a different time, and not just when it came to the gender split. Unicycles were more popular on campus. Homework was more of a solo endeavor than it is today.

Hofmeister knew before she got to Mudd that she wanted to study physics. “It’s fundamental and mathematical,” she says. She also had a concentration in literature, which she says helped hone her writing skills, become a better communicator and, later, an author.

After graduating from HMC, she earned her M.S. in physics from the University of Illinois, then another M.S. and a PhD in geology from the California Institute of Technology. The physics degree got her interested in spectroscopy, the study of the absorption and emission of light. 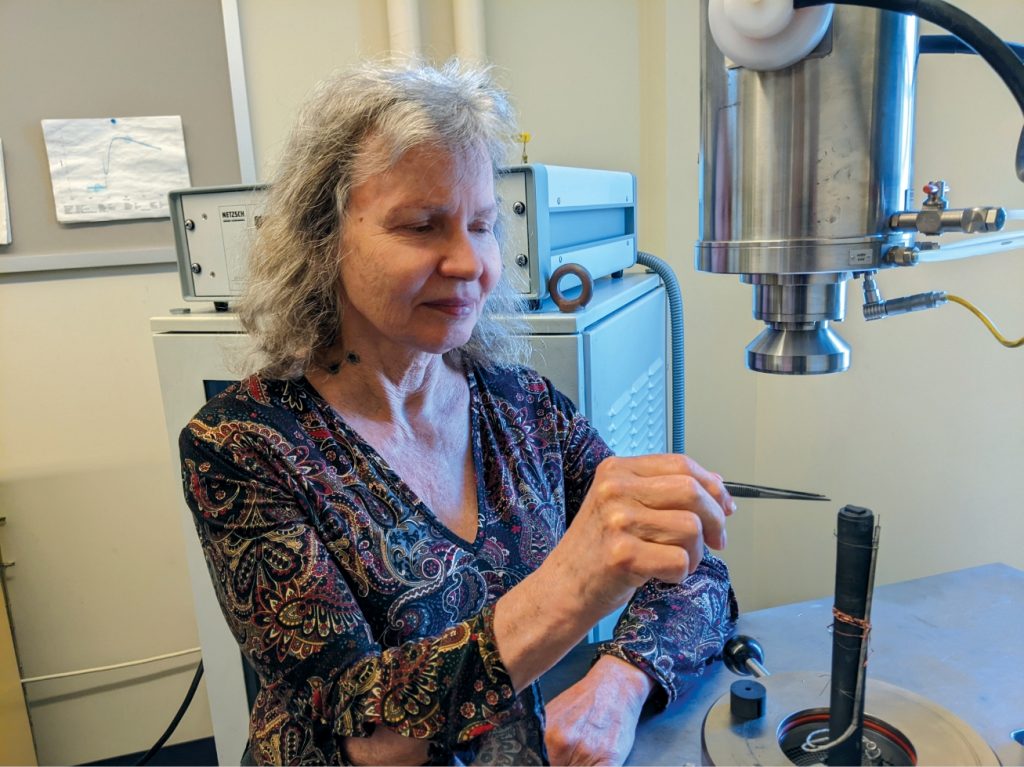 To measure how heat moves through materials, Anne Hofmeister ’76 loads a solid sample into the laser-flash apparatus in her lab at Washington University in St. Louis. Prior to 2020, the university had the only geoscience department in the world with such a device.

At Caltech, she was nudged toward Silicon Valley. She resisted because it “seemed rather boring,” she says. “I know other people wouldn’t feel that way, but it just didn’t appeal, so I moved over to earth science, and spectroscopy was the natural place to go.”
She started her academic career at the University of California, Davis in geology before moving to Washington St. Louis University, where she’s been since 1994. Now a research professor in the Department of Earth and Planetary Sciences, she’s focused on understanding heat transfer, the exchange of thermal energy between objects. “Heat transfer is everything,” she says.

In 2006, she introduced laser-flash analysis—the gold standard of the industry— to measurements of Earth materials. This technique quantifies heat transport across semi-transparent materials like silicates and oxides. Using a steel-welding laser, “you hit the sample with a tiny heat pulse from a laser, and you record how the temperature changes on the back side from its emissions,” she says. The analysis also includes how quickly the transfer happens. The apparatus that does the analysis is in her laboratory in the Earth and Planetary Science department at Washington University, a one-of-a kind geoscience facility.

Hofmeister decided to study heat transfer from the geophysics perspective in order to help draw a clearer picture of heat transfer inside the Earth. It hasn’t always been smooth sailing. Her work has been controversial in earth sciences and astronomy, she says, because she’s challenging basic assumptions formed prior to the 1930s that she believes are incorrect.

One such assumption is that spinning stars and planets will contract and heat up. She compares this to Olympic figure skaters. As they spin,” they pull their arms in—they don’t catch on fire,” she says. “There’s this basic assumption that newly formed objects are so hot they melt, and that’s just wrong. They spin up. We can see that in the data on star spin rate.”

Hofmeister’s work has been more embraced in material science because heat transfer is also critical in understanding and designing things humans build. It can help engineers determine how much and how quickly a bridge will expand in the heat, for example. Knowing heat transfer also helps with computer design, by determining how thin glass can be while still allowing a computer to cool down.

In 2019, she published Measurements, Mechanisms, and Models of Heat Transport, a textbook that offers an interdisciplinary approach to the dynamic response of matter to energy input. “It’s not the final answer, but it’s the summary of what I did for 20 years,” she says—not final because she’s still working, researching and exploring heat transfer. In 2020, she published Heat Transport and Energetics of the Earth and Rocky Planets, which applies heat transfer to Earth, Venus, Mercury, Mars and rocky moons, trying to understand how they behave.

At 68, she’s still working on that “final answer,” she says, while making sure to carve out time to play with her grandchildren, to swim and to refinish a 1985 Porsche, which she jokes “breaks down at the most inopportune times.” Looking back on her career, she recognizes that she had a steeper hill to climb than her male counterparts because she was a mother of three children, which permitted focusing on research but not simultaneously on career-advancement. A few years ago, she became involved in helping other women scientists and now coordinates the Distinguished Lecturer Program of the Association for Women Geoscientists.

Nearly every day, Hofmeister is reminded of the lessons Harvey Mudd taught her about science and discovery. Instead of “dressing things up,” she goes back to the beginning and considers what an idea is rooted in and why scientists think about it the way they do. “My basic training at Harvey Mudd has led me to question a lot.”