The road to the perfect ceramics glaze began on Platt Blvd. for Gabriel Takacs ’05 and his partner, ceramicist Andrea Wolf SCR ’05.

Gabriel Takacs ’05 and his partner, ceramicist Andrea Wolf SCR ’05, had a frustrating problem. Wolf knew that the clay she was using required a glaze with specific properties unavailable in commercial products, so she’d begun making her own glaze using existing calculation software. But the software only helped to a point: It could tell a user what was in a glaze recipe, but it couldn’t easily calculate how to adjust the recipe to achieve specific goals. After spending many fruitless hours guessing and testing, Wolf asked Takacs if he could think of a better way. Takacs, a Microsoft engineering manager, ceramicist and Harvey Mudd engineering alum, surmised that, yes, there probably was a more efficient method of making glaze recipes.

After about a year of research and tinkering in their home studio in Santa Clara, California, Wolf and Takacs developed an initial glaze recipe tool that solved their problem. It was so effective that they decided to file a patent in 2018. Development continued until, after moving to Issaquah, Washington, the couple participated in HMC INQ, a mentoring program for startup companies founded by Josh Jones ’98 and Professor of Economics Emeritus Gary Evans. During HMC INQ, the pair formed an LLC and launched GlazeForge.com in 2020.

“Glaze Forge gives you direct control over many aspects of glazes, not only the chemistry,” says Takacs, who earned a PhD in electrical engineering from Stanford University. “It enables artists to spend more time making art and less time being frustrated by poorly behaved glazes.”

Takacs shares more about how college experiences helped mold their business and the process of making glaze. 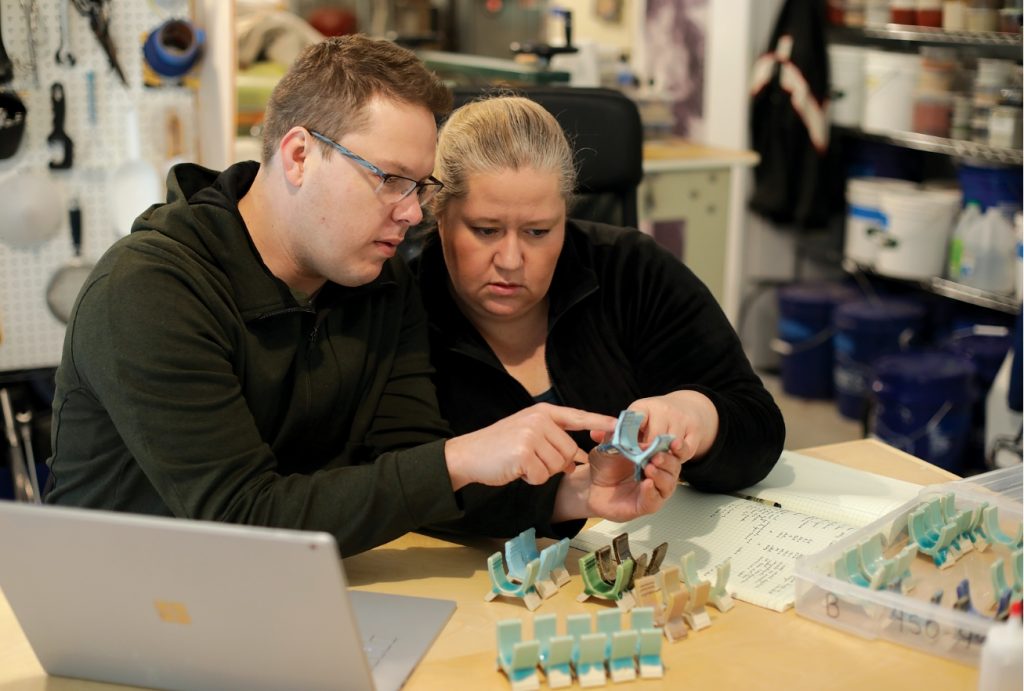 Developing a specific glaze is one thing; repeating the process with the same result is another. Gabriel Takacs ’05 and Andrea Wolf SCR ’05 developed a glaze recipe tool to help ceramicists get the perfect result every time.

How did your college experiences lead to creating Glaze Forge?

You can almost draw a straight line from our education at HMC/Scripps to the existence of Glaze Forge. Andrea spent the latter half of her degree taking every ceramics course that the 5Cs had to offer while spending a bunch of time at HMC. The baseline knowledge/awareness of the technical fields of study are part of the spark that led Andrea to believe there was a better way to compute glazes. She also took web design at Pomona College, which has been helpful in building GlazeForge.com. From a ceramics perspective, Andrea became the studio technician for the Scripps and other 5C ceramics studios in the latter half of her degree, which gave her extensive experience mixing clay and glazes for classes.

I entered the ceramics world by taking a beginning ceramics course at Scripps at Andrea’s urging. Having always been interested in the arts, I took an interest in the medium, but couldn’t spend much time on it due to the HMC course load. (As a side note, I chose to attend HMC because of its balanced curriculum between the arts and sciences.) The engineering degree at HMC exposed me to a range of topics that later turned out to be highly applicable to ceramics in general and Glaze Forge in particular.

Key examples: first-year chemistry laid the basics of inorganic chemistry and chemical computations; various lab-based classes taught how to keep a lab notebook; mechanical engineering taught the mechanics of stress and strain in bulk materials; materials engineering taught about crystal growth, thermal expansion and failure modes; and, obviously, computer science deepened my programming knowledge. In addition to knowledge from HMC, my graduate studies in control and optimization were also critical to the development of Glaze Forge.

However, the most salient point is that Glaze Forge is exactly the type of interdisciplinary endeavor that is enabled by a 5C education. 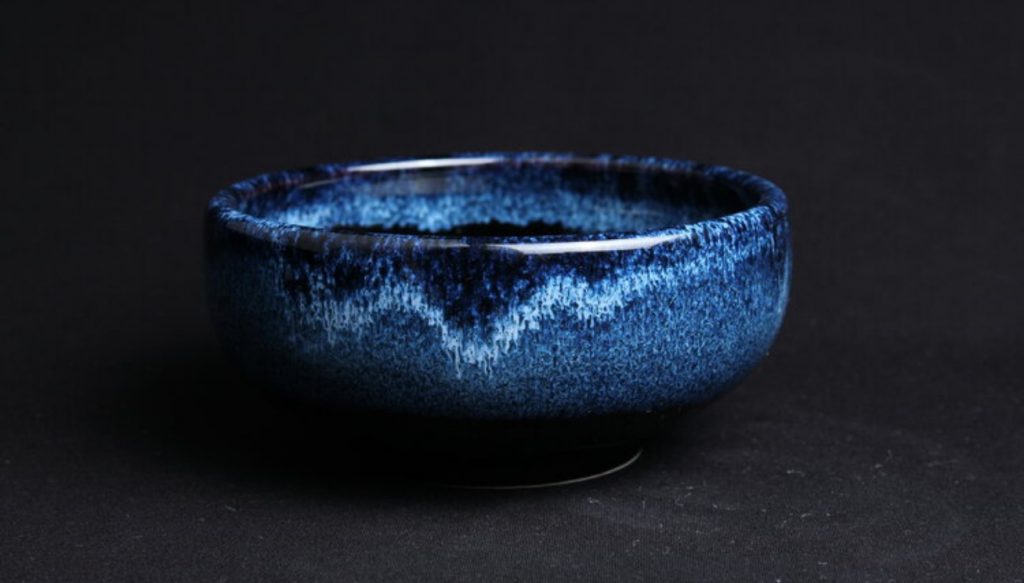 Glaze Forge technology allows the user to specify what chemical and physical properties they want in the glaze and get the optimal recipe for achieving that result.

How does the Glaze Forge process work?

Many ceramic artists end up needing to modify existing glaze recipes. There are many parallels between a traditional chemistry lab and a ceramic studio. Small-batch experiments are run to try a bunch of hypotheses, and notes are taken (with varying degrees of fastidiousness). The turnaround time for each experiment is at least eight to 12 hours because of the time it takes to fire a kiln. To save time, ceramicists will often perform a “line blend” wherein many variations are tried in a single batch. While this reduces the number of iterations, each iteration becomes more tedious, and it can be wasteful of expensive and often toxic materials. Glaze Forge allows the artist to specify what chemical and physical properties they want in the glaze and get the optimal recipe for achieving that result. While this doesn’t eliminate the experimental process, it makes for far fewer and more accurate iterations.

Like other glaze websites, GlazeForge.com allows artists to store their recipes along with photos and notes. Glaze Forge takes it much further by also understanding what materials a user has available and gives them controls to directly modify every aspect of the glaze within the constraints that they provide. We aim to be helpful to people who are just dipping their toes into glazing by offering wizards that walk you through the process and make good assumptions for expert settings. For expert users, we offer the “power console,” which provides direct control over every aspect of the glaze. As one user put it, “Your program has reenergized me in testing new glazes. I feel like I have my hands on useful dials, and I’m not just shooting in the dark.” Once glazes are formulated (or adjusted), we also offer views for easily and accurately comparing different glazes to understand what’s changed.

Here’s a typical user scenario: An artist sees a photo of a glaze that they really like, and they try it out by mixing a test batch which is applied on their clay. This recipe will often exhibit one of many potential flaws, including difficulty applying to the clay, cracking after firing or requiring an unavailable ingredient. In this case, the artist can load the recipe into Glaze Forge and adjust the problematic property while keeping the other properties as close to the desired recipe as possible. 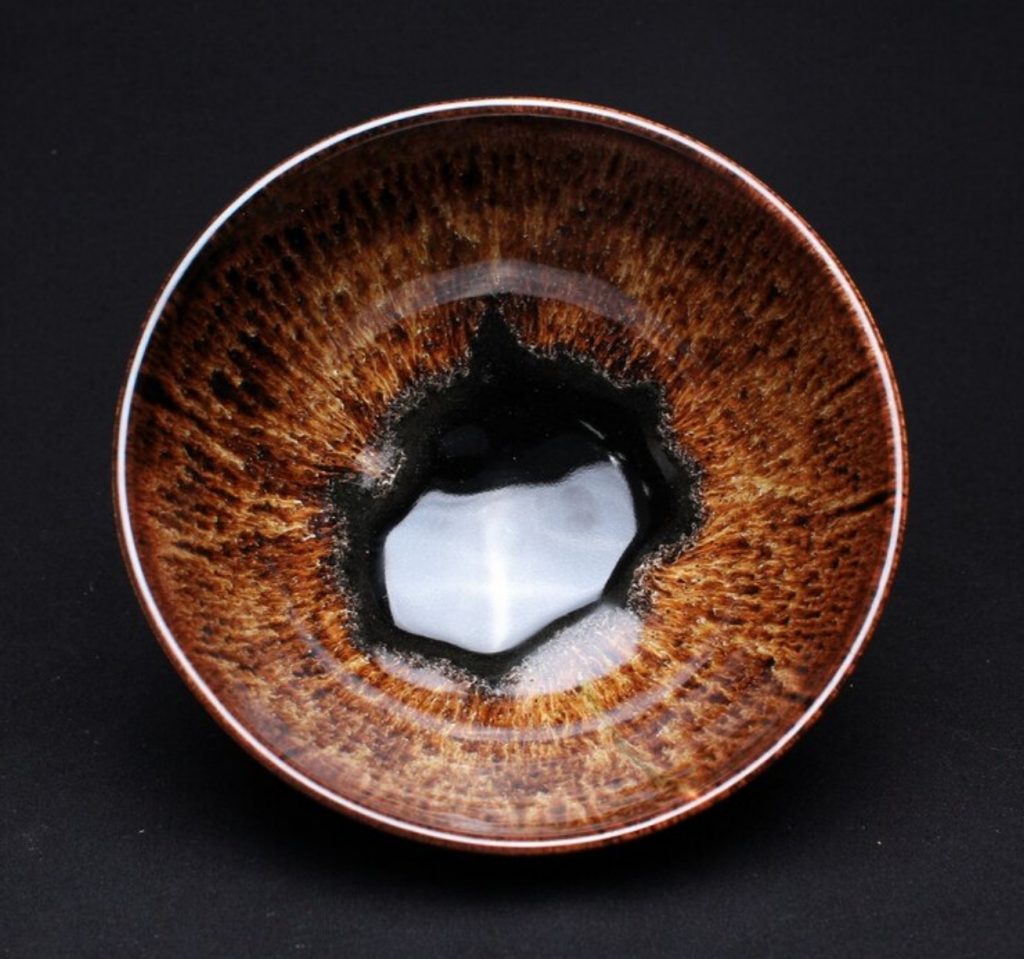 Perfecting a repeatable result in a glaze requires experimentation, trial and error and fastidious note taking, all of which Takacs learned to practice while attending HMC.

Are the color/texture possibilities endless when it comes to creating glazes?

Yes and no. Glazes are basically glass that is applied in a powdered form to the unfired clay. This powder melts into a silica glass during the firing. The temperatures (>1200C) and atmosphere (oxidation/reduction) of the firing places limits on colors and effects that can be achieved. Some elements will become volatile and burn off during the firing. Some colors require toxic chemistry to achieve. Glaze Forge plays a key role in helping the artist to push the limits of the chemistry to achieve a wider range of colors while still producing safe, functional pottery. For example, old glaze recipes frequently relied on lead to achieve certain colors, but we’ve since learned not to poison our customers.

Describe a time that you hoped for one result but ended up with another. If it was an improvement, could you recreate it?

One thing that I learned from HMC was to take fastidious notes during experimentation. One of our biggest fears is to discover something but not have written down what we did. Even so, ceramics is a fickle process wherein the exact chemistry of the mined materials are not often known (and can vary slightly from batch to batch) and the firing process has a large effect on the outcome. Some effects, such as opalescence, are notoriously difficult to repeatedly reproduce. In fact, the catalyst for Glaze Forge was just such a fickle glaze experiment.

We had been playing with modifying a recipe by adding some new ingredients when one of the tests came out as a spectacular result that resembled the waters of a Caribbean beach. Despite detailed notes, we could not reproduce the result. The process of tweaking the glaze chemistry to reproduce this glaze is when we were pushed to the limit of our patience with existing software and felt there needed to be a better solution. After literal years of fiddling around with this recipe, we’ve concluded that the reason the original came out the way that it did is that it wasn’t fully mixed before application.

We’ve also had a few other pleasant (and repeatable) surprises while experimenting. For example, we have found a glaze that produces a subtle range of pastel color that should not intuitively be the result of the chemicals in the glaze. We overlooked the result at the time, but years later noticed it in our test archives. When we looked up what it was in our notebook, we thought that we must have made a mistake. After remixing the glaze from our notes, we were able to reproduce the result. This is a testament to good note taking and archiving.

Our current users are ceramic artists and educators who have access to glaze-mixing supplies. Some of our customers have signed up to help them fix a single problematic glaze, while others are using it as their primary glaze database. We have a lot of interest from people who want help with custom glazes, but don’t have the space or desire to set up a glaze lab. We’re actively working to expand our offerings to address this set of people.

Today, the account model is for individuals, but we’ve had interest from a few institutions, and are looking to partner with early adopters to identify the right business model for institutional customers