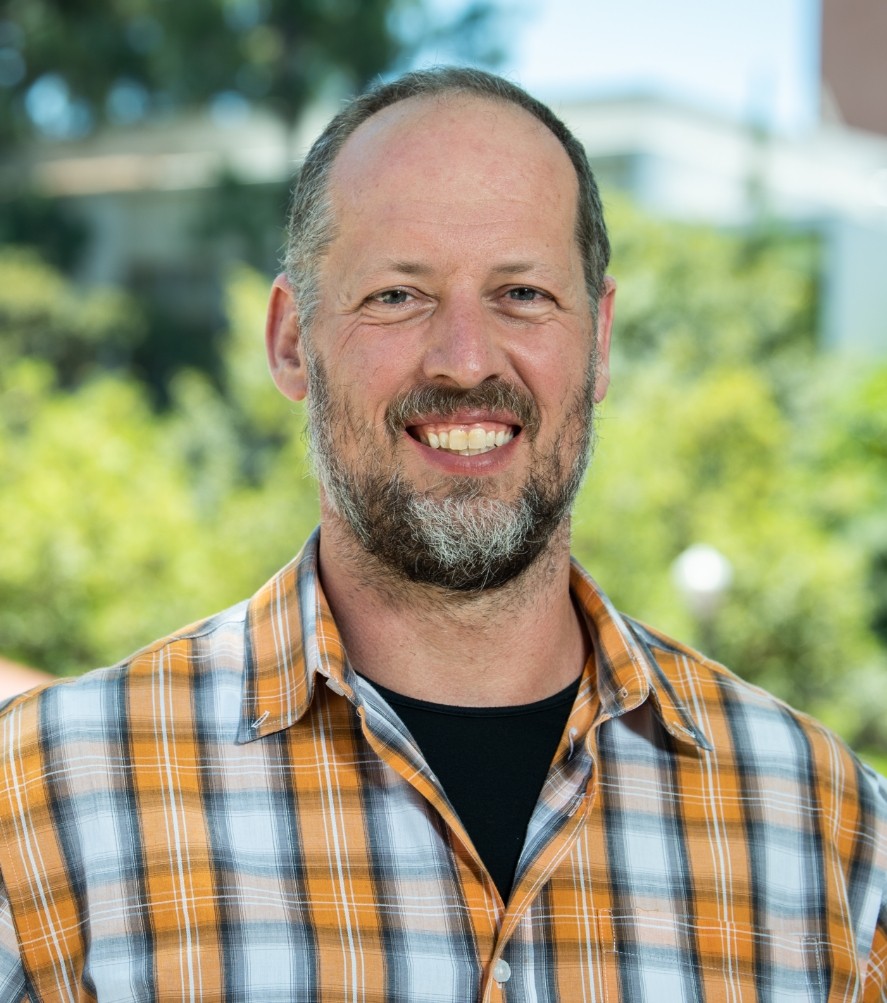 With the benefit of hindsight, Jim Campbell ’98 has come to see how his time at Harvey Mudd College positively influenced and broadened his worldview. As his career has progressed, he’s witnessed the ideals of the HMC mission statement come to fruition in ways he hadn’t imagined. Now, he sees his support of the College as an extension of that mission.

Campbell has more than 20 years of experience developing and evaluating navigation and remote sensing systems with Raytheon Technologies and the Boeing Company. He is a systems engineer at Raytheon Intelligence and Space, and he’s a consultant with USC, performing research for the NASA Cyclone Global Navigation Satellite System, a continuation of his PhD studies. In addition, Campbell volunteers with the IEEE Geoscience and Remote Sensing Society to share his expertise and enthusiasm for science.

I grew up in the Puget Sound area of Washington State, mostly Federal Way. I had a modest upbringing; two brothers and a sister. My father was a pastor of a small church and always had a great passion for serving and helping others. He graduated from Harvey Mudd in 1968 with a physics degree. Incidentally, my sister also graduated from Mudd, but later in 2007 with an engineering degree, and she married a Mudder, too.

My father often spoke of Harvey Mudd and its challenging curriculum. I always had a natural interest in math and physics, and my father tutored me from an early age. I was doing calculus by 12. I also studied piano for many years. When I was looking at colleges, I had to decide whether to pursue piano or math and sciences. I wasn’t sure what I wanted as a specific career, but realized I didn’t have enough interest in piano, and I never got tired of math and science.

My decision to attend Harvey Mudd was based mostly on its reputation for rigorous academics. I wanted a top-notch school. The low student-to-faculty ratio and the option to sample classes from the other Claremont colleges were also attractive. Mudd was also very generous with providing financial aid. Back then, the College had a program of pairing up donors with students receiving financial aid; I met regularly with my donor couple and really got to know them. They made a big impression.

The donors, Max and Hilda, weren’t even Mudders themselves. They lived in Claremont and had met Founding President Joseph Platt one day. They were so impressed with Platt’s humanist values that they made regular financial contributions so students like me could get an education. That was so foreign to me: to give without faith-based motives. Their generosity was genuine. And inspiring.

Up until that time, all my ideals came from my upbringing in the church. My time at Harvey Mudd instilled scientific principles which eventually led me to reinterpret the world around me in more rational ways. I realized that I have a natural aptitude for the sciences and that there is a demand for these skills and services. By being an engineer, I could find meaning and a place in society.

What about life after HMC?

I took a job as a systems engineer in the defense industry, but I wanted to broaden my professional engineering experience, so I enrolled in night courses at Cal Poly Pomona for my master’s in applied mathematics, which I received in 2006. In 2014, I decided to pursue a PhD at USC.

Sometime after graduating from Harvey Mudd, I received a call from a Mudd student asking for support for the annual fund drive. It made me smile. When I was an undergraduate, I had seasonal work in the alumni office, calling up alumni asking for contributions; I was amazed at their financial responses. Of course, since I had been on the other end of the call many times, I had to make a donation, something I have continued to do ever since.

How did your planned giving to Harvey Mudd come about?

Like many other American workers today, much of my personal wealth is invested within qualified retirement plans. When I realized that colleges and universities could be designated as beneficiaries of these plans, I thought, “Here is a way I can make a bigger impact for Harvey Mudd.” It made sense to me since Mudd was so instrumental in shaping my early life and thinking.

It all comes back to the Harvey Mudd mission statement with its emphasis on the humanities, social sciences and the arts in addition to understanding the impact of scientific work on society. When I was at Mudd as a student, that seemed secondary, but only later have I come to fully appreciate its intrinsic value. It’s a statement that is so in harmony with my personal values today.

If you’ve already included Harvey Mudd College in your estate plan, kindly let us know so that we can welcome you as a member of the Planned Giving Legacy Society. To learn more, please visit Planned Giving, which includes information about ways to support the College today and after your lifetime. The website features easy-to-understand videos, inspiring examples and interactive calculators to assist in exploring your giving options.