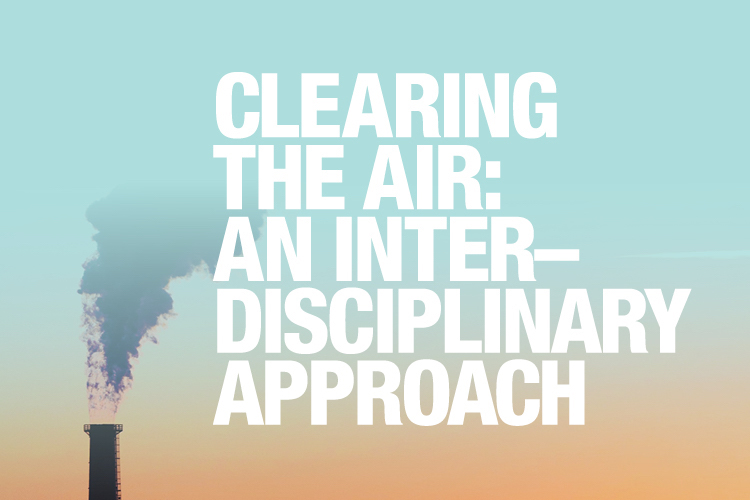 When Lelia Hawkins was studying climate science in graduate school she would say that her team wasn’t saving the world, they were just very carefully documenting its demise.

While that still may be the case, Hawkins, associate professor of chemistry, is sounding the clarion call to Harvey Mudd College students, no matter what their disciplines, to tackle the global threat of climate change.

Hawkins is leading the way through teaching, research, global collaboration and activism.

She recently organized a climate change reading group on campus to kickstart the conversation. The group met three times during the fall to discuss Andrew Hoffman’s book How Culture Shapes the Climate Change Debate.

“Climate scientists are struggling to communicate effectively, both in terms of the seriousness of the problem and in their appeals for engagement to a diverse group of voters,” Hawkins wrote in her campus-wide invitation. “It’s a big problem, but our Mudd community is well-equipped to do something about it.”

The group of about 30 students, faculty and staff discussed the role of scientists in explaining the current state of climate change, shared thoughts

on how to increase science literacy, described how they talk about climate change with family members and more. Hawkins believes that conversations like these help broaden crucial conversations.

Getting to the Source

“We’re trying to understand what sources of pollution contribute not only to high levels of particles that we might breathe, but to the brownest or the darkest particles, aside from things like soot, whose origins we know,” she says.

Students in her lab take ambient measurements of the chemical composition of particles in the air surrounding the College as well as their UV-visible absorbance. They also study particle reactions specific to clouds and cloud water and foggy conditions.

Several years ago, Hawkins learned of a cloud chamber in Paris, France, that was designed to simulate those conditions and was available to researchers worldwide. In 2015, coincidentally the same year the Paris Agreement on Climate Change was signed, Hawkins took two students to Paris using a portion of a National Science Foundation grant secured by David De Haan, her postdoc advisor at UC San Diego. That experience was so rewarding that the following summer Hawkins was able to obtain funding from the Barbara Stokes Dewey Endowed Chair, the Mudd European travel fund and her own startup to take two more students with her. In 2017, she sent two recent Harvey Mudd graduates.

Then, she and De Haan applied for and received a three-year collaborative International Research Experience for Students grant through NSF that enables them to take two students from Harvey Mudd and three from UC San Diego and spend one full month each summer in France.

“Not only were we working alongside French scientists, but we also had a team from the University of Helsinki,” Smith says. “It was really cool to see how our data came together as a team.”

The experience also gave Smith a better understanding of how the scientific community interacts. “As scientists, our job is to improve our understanding of the world we live in, and to make a positive impact on society. Consolidating our knowledge to find the best possible solution is the best way to do that.”

The Way to Change

Hawkins came to Harvey Mudd because she believes that its students are well-equipped to tackle things like air pollution and climate change because they are learning to be interdisciplinary.

Last fall, Hawkins taught Introduction to Global Climate Change, a new course for students at all levels and from all five undergraduate colleges. In spring 2019, she co-taught a course with Adam Pearson, a Pomona College psychology professor, who studies how groups can become more engaged in climate science. In addition to studying the fundamentals of physics and chemistry relating to climate science, students learned about the politics of climate change and how voters can have an impact since they select the decision makers.

“A number of students said it was the best class they’d ever taken,” says Hawkins, who looks forward to teaching the class in spring 2020.

“You cannot just be a chemist and work on climate change or air pollution,” Hawkins says. “You cannot just be a physicist. You can’t even just be someone who has a technical background. You’re not going to get anywhere. You might publish papers, but you aren’t going to effect change. And, my goal is to actually make things happen that are for everyone’s betterment.”