Students gather around a large closet wrapped in crisscrossing chains secured with a rusting lock at the center. One fumbles with the key as the timer on the wall counts down its final 10 seconds. The lock clicks open and the chains crash to the floor. The door creaks outward and Cole Kurashige ’20 strolls out. The students scream.

“Congratulations,” he says. “It was starting to get pretty toasty in there.”

The startled group of Mudders is thrilled that they’ve finished the escape room with seven seconds to spare. Several student organizers swoop in and quickly rearrange the room to prepare for the next group while Kurashige takes a celebratory photo of the participants and answers questions.

This escape room at Harvey Mudd—themed on “The Golden Age of Magic”—operated continuously last spring for three days from 10 a.m. to 6 p.m. Four students forfeited a weekend, working behind the scenes to ensure its smooth operation. A little over a dozen Mudders put in hundreds of hours to make this challenging and fun experience a reality.

In an escape room, a team is “locked” in a room and given a short amount of time—in this case 30 minutes—to gather clues and solve puzzles in order to escape. Escape rooms have become increasingly popular and can be found throughout the world, but HMC students say their escape rooms are different because they’re made for Mudders by Mudders and are hosted on campus. 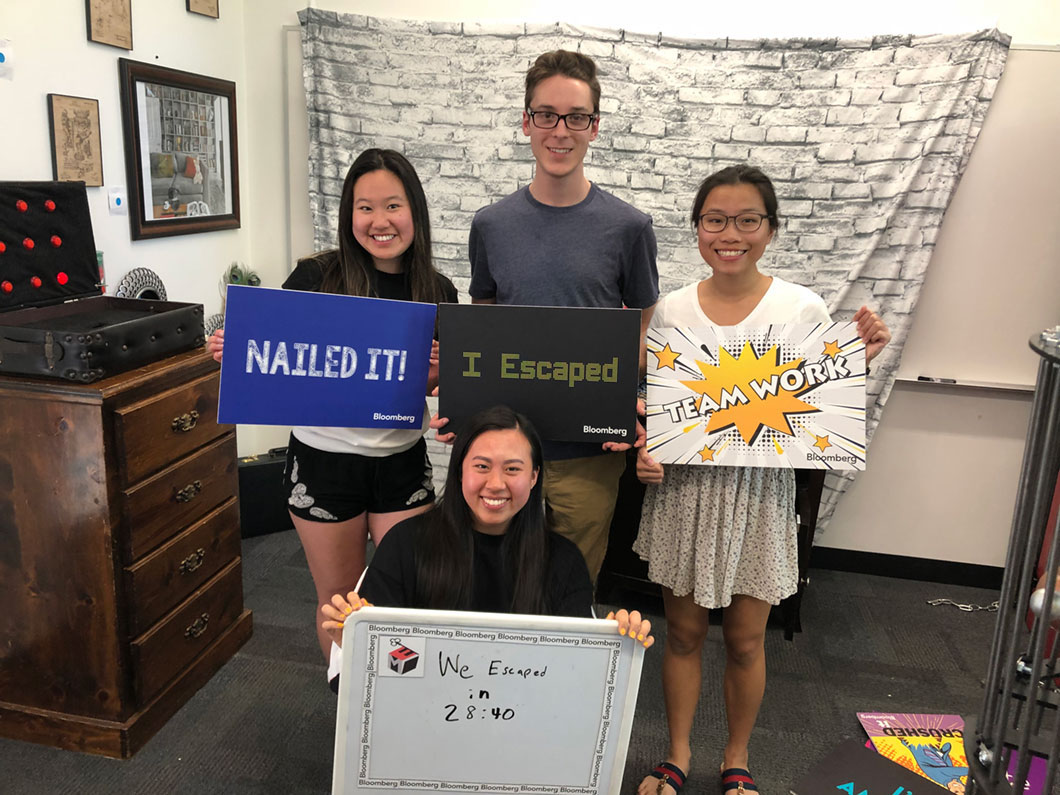 Encouraged by rave reviews, the MuddEscapes team decided to build a second, and even better, escape room. Planning was well underway by the end of the summer when the team assembled, got more funding and started designing puzzles. The team decided on a theme, “The Golden Age of Magic,” and sought out inspiration for magic puzzles. One effect was inspired by a “Liquid Sand Hot Tub” video, another by the similarity between playing cards and the keycards used to access dorm rooms and a third by a magic trick that was suggested by Noquez, a visiting mathematics professor and part-time magician. “People seemed perplexed when they saw us carrying an air compressor, 10 pounds of sand and a top hat from the mailroom,” says Kurashige. “But as disparate as these items may seem, each had an important use in the escape room.”

By the middle of the spring semester, everything started to come together. Using the tools in the Machine Shop, the team constructed a giant bird cage, a zen garden that liquified on command, an invisible maze and many more puzzles to awe and confound players. But more goes into an escape room than what is on the surface: underlying all of the team’s puzzles are an interconnected network of microcontrollers, electronics and monitoring equipment to ensure that the participants have an enjoyable experience. Gillespie says, “The team spent many late nights in the Mudd Makerspace soldering together electrical components, which would allow us to remotely activate a puzzle or track when it was solved.”

The day before opening the escape room in the Shanahan Center, all of the puzzles were complete, and the team mobilized to install them, some people pushing furniture in a shopping cart borrowed from East Dorm, others driving to Goodwill to purchase more books to decorate shelves and yet others arranging and decorating the room itself. They worked until 4 a.m., went to sleep and hit the ground running the next day.

“Though tiring, operating the escape room is a lot of fun,” says Kurashige. “It is a wonderful feeling to hear the excitement from a team when they solve a puzzle and see the special effects we put in the room. It is also entertaining to watch the various ways in which teams get confused and, in some cases, cheat on certain puzzles.”

In all, the room was run for 34 teams, about half of whom were successful. The fastest team finished within eight minutes and 44 seconds, and the slowest successful team had only two seconds left. Only one team made it through without receiving any hints.