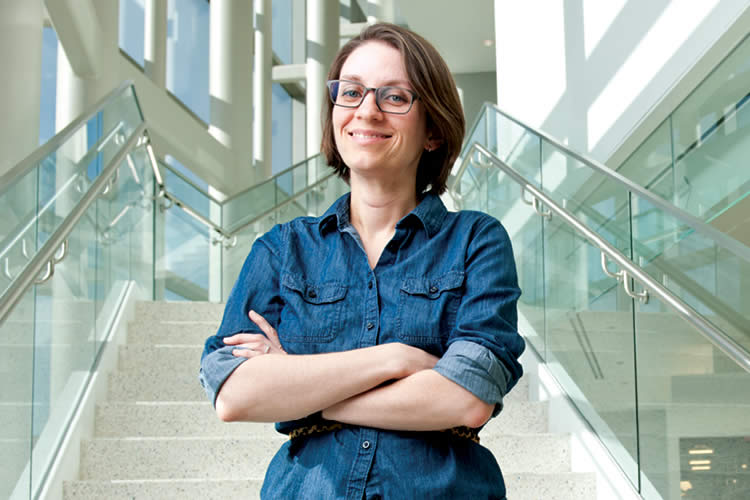 Pregnant women often hear that they should “eat for two,” but the adage doesn’t hold up for Molly Waring ’03, a chronic disease epidemiologist at the University of Massachusetts Medical School.

“That’s a misconception. Especially earlier in pregnancy, when the fetus is about the size of, say, a kidney bean, you’re really eating for 1.01 or something like that,” she says, laughing. Waring, a psychology/biology alumna, studies weight management across the lifespan, with a special focus on pregnant and postpartum women. The early days of parenthood might seem like a challenging time to talk about weight loss, but Waring says it can be a “rich time of life” for healthy changes.

“It may be difficult, and there are a lot of barriers to making lifestyle changes, but many women are very motivated to be healthy for themselves and their babies,” says Waring, an assistant professor in the departments of Quantitative Health Sciences and Obstetrics & Gynecology.

While at Harvey Mudd, Waring says she “went in different directions to find the thing that most struck my passion,” taking courses in math, computer science and biology before deciding to major in psychology. A summer internship sequencing dragonfly eye DNA convinced her that she liked working with data—but not dragonflies. “While I saw the importance of that research, I realized that for me personally I wanted to be a little bit closer to improving the health of human beings.”

Her PhD work in epidemiology at Brown University eventually drew her to studying obesity and weight management, particularly among pregnant and postpartum women. Obesity among pregnant women has been linked to complications such as gestational diabetes and preeclampsia, and there is some research to suggest that maternal obesity might “program” a fetus’s metabolism in a way that leads to conditions such as diabetes later in life.

The most effective strategies for promoting healthy weight gain during pregnancy are similar to the advice offered to most adults, including keeping a food diary and increasing physical activity. Waring is focused on the best way to deliver evidence-based weight management strategies to women who may be too busy to attend a weekly clinic or weight management group. “It’s just not practical for many women,” she says, “especially those who already have a child at home.”

Waring and her colleagues recently finished a pilot study that looks at how these interventions could be delivered through an interactive website, where a health counselor and a group of pregnant women share advice and support. Although they are still analyzing their data, the researchers are encouraged by feedback from the women.

“They told us that having women who were going through very similar things was a really helpful part of the program,” Waring says, “especially when they didn’t have women that they knew or that lived near them who were pregnant or at the same point in their pregnancies.”

Waring has a 3-year-old and a 5-year-old with her husband, Ben FrantzDale ’03. “There’s something to be said for experiencing the thing you’re researching,” she says. “It made me appreciate how much more challenging some of the things I found difficult during my pregnancies would be for women with fewer resources.”

She and colleagues are working to develop and test this and other behavioral weight management interventions delivered through social media platforms like Facebook and Twitter, with an eye to reaching the widest possible audience. “I don’t want to just stop and say it works in the research setting,” Waring says. “I would want to see our interventions implemented on a larger scale, where women across the country can access it through a university, or maybe we can work with the CDC to offer it to women nationally.”