With menu items as diverse as Mongolian barbecue, rotisserie chicken, Brazilian barbecue made on a churrasco grill, Thai curries and noodle soups, Korean tacos, and pozole, it’s safe to say that college dining has evolved.

Hoch-Shanahan Dining Commons offers these culinary selections—all made in-house from scratch—to Harvey Mudd students and to those from the other Claremont Colleges, who often line up early in anticipation. It’s no surprise then that Harvey Mudd is on The Daily Meal’s annual list for best college dining.

Harvey Mudd is lauded for going trayless and offering reusable cups and to-go containers. Students can track the nutrition of all meals through My Fitness Pal and Fitbit, with whom Harvey Mudd partners, and they can enjoy some healthy competition during a Copper Chef Competition (modeled after Iron Chef), held several times each academic year. Dining services works with students who have special diets and food allergies, and all lead employees have completed gluten-free training through the National Foundation for Celiac Awareness GREAT Schools program, allowing Harvey Mudd to earn recognition as a GREAT School. 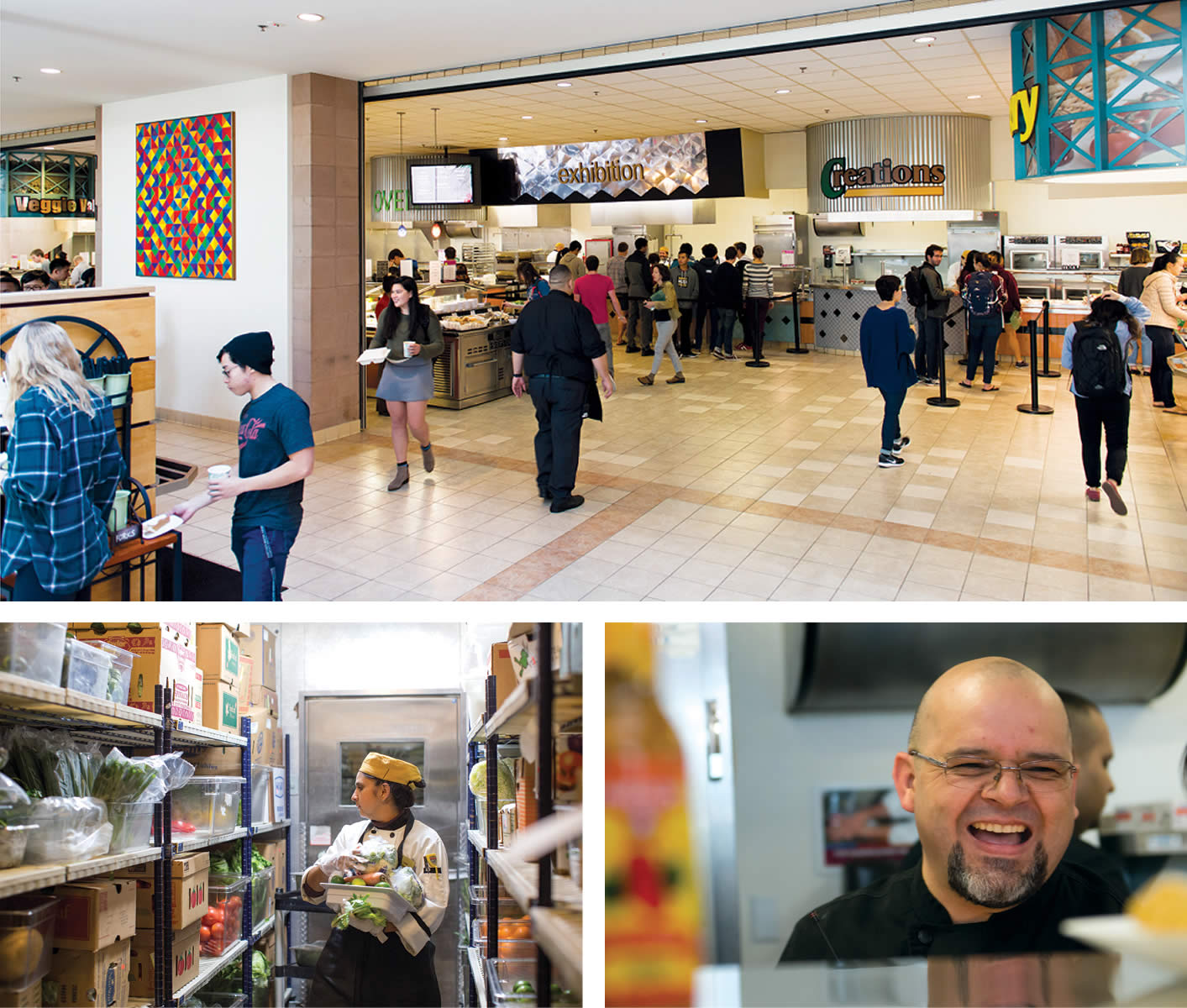 Veggie Valley and Simple Servings: Although annual student surveys lean strongly toward the meat eaters (one reason for the dining hall’s 5-C popularity), the Veggie Valley remains a popular station. Nearby is a station called Healthy Servings for those with food allergies, gluten intolerance, or those who prefer plain and simple foods. Food here is free from common allergens: peanuts, tree nuts, shellfish, wheat, soy, milk products and eggs. All foods offered in Simple Servings are also gluten free.

Good taste applies to more than just the food. The multicolored geometric painting near the drink station is by artist Karl Benjamin (1925–2012). Benjamin received his MFA from Claremont Graduate University in 1960 and went on to teach art at Pomona College and Claremont Graduate University. From the studio he built behind his home on 8th Street in Claremont, Benjamin produced a prolific amount of work and became one of the art world’s dominant figures in abstract geometric painting. His work can be found in the permanent collections of many museums, including L.A.’s Museum of Contemporary Art, the Art Institute of Chicago and the National Museum of American Art.

Kelly McConnell ’17, the goalie for the Claremont-Mudd-Scripps women’s soccer team, says she appreciates all of the healthy options, including the Creations custom salad bar, as well as the friendly staff and the flexibility of being able to eat “in” or take her meals to go (in a recyclable container, of course).

Salad bar: The three daily soups are fresh, as is the bread. Local (up to 200 miles away) organic produce is featured based on the season and availability.

Exhibition: Dining Services General Manager Miguel Ruvalcaba, who has worked at each of the 5-C’s says, “Never have I seen an exhibition station as popular as HMC’s.” He attributes its popularity to Mudders’ technical personalities—they want to build it. The most popular build-it-yourself themes are Pasta Night (Wednesdays) and Pizza Night (Fridays). On these occasions, you’re likely to find lines from the station all the way to the cash register. Juan Sanchez (pictured), is one of the popular Exhibition chefs. He says, “The students are very decisive, and I enjoy making the dishes they like.”

Isabel Balseiro, Alexander and Adelaide Hixon Professor of Humanities and Professor of Comparative Literature, frequents the dining hall about twice a week. She’s among the many Harvey Mudd professors you’ll find dining with each other and with students during mealtimes. “Meeting students informally is a great plus,” she says. She calls the Exhibition and Creations stations “a luxury,” and enjoys the friendliness of the kitchen workers.

Creations: Salad made to order, only open during the lunch hour, is the most popular station at that time. Students love it so much, they brave wait times of up to 15 minutes for the opportunity to craft their custom salad tossed with one of 16 custom-made dressings (most popular: jalapeno-cilantro and Fernando’s Spicy Dressing, a student’s creation), and their choice of six to eight different proteins (including shrimp and smoked salmon), assorted vegetables, berries, dried fruits and even avocado. The Creations station, a suggestion from the student-run Food Committee, accommodates the increased demand for foods prepared fresh while diners wait.

Lupita Olimon is all about the salad. She’s worked in the dining hall for 15 years.

Miguel Ruvalcaba, dining services general manager, has worked at many college and university dining halls, including at each of the undergraduate Claremont Colleges. He says, “At Harvey Mudd, we have invested heavily in kitchen equipment and talented chefs in order to make possible any menu imaginable. We also work closely with our student-run Food Committee, which meets with dining staff weekly, to make their on-campus dining experience varied and fun.”