Harvey Mudd College’s Alumni Laboratory for Advanced Chemistry, previously known as the SuperLab, just got a lot more super. At the start of the 2017–2018 academic year, students, faculty and staff became the beneficiaries of renovated instructional laboratories in the Jacobs-Keck Science Center complex. All chemistry labs were made safer, more functional and modern, with new workspaces and see-through fume hoods. The labs also showcase the many equipment and instrumentation upgrades that have been made in the past few years. The chemistry labs in the Keck wing were the “oldest academic portion of the College that hadn’t been renovated,” says Kerry Karukstis, Ray and Mary Ingwersen Professor of Chemistry and Department of Chemistry chair. Asked about her favorite aspect of the renovations, Karukstis says, “The spaciousness, the lightness and improved sightlines to ensure safety.” The lab is used for instruction in upper-level courses in the various branches of chemistry—organic, inorganic and analytical. 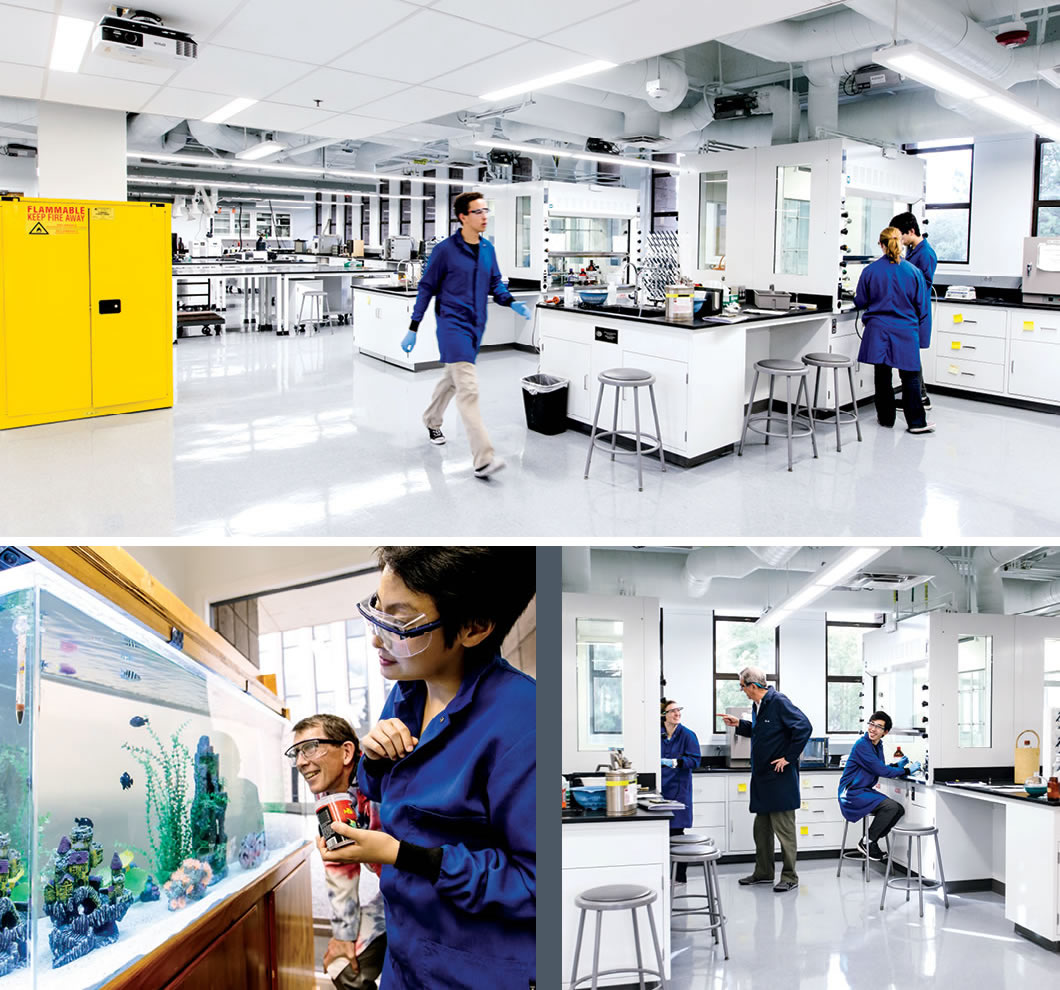 The more spacious layout improves access to instrumentation and allows for small-group lecture and lab write-up areas. With the open, modular design, a lot of experimentation can happen at once. The glossy white walls are dry-erase friendly and magnetic, allowing students and professors to write notes and post information. A ceiling-mounted projector is used for presentations of student work.

The gas chromatograph mass spectrometer (GCMS) pulls apart very complex samples and analyzes them. This instrument is similar to one used for things like urine analysis in Olympic drug testing. At HMC, students run a drug test of their own, investigating the widespread claim that traces of cocaine can be found on a large percentage of U.S. currency in circulation at any given time. The GCMS is so accurate, students are able to tell the difference between a bill that’s been used to snort cocaine and a bill that has been contaminated indirectly, perhaps picking up traces of the drug from other bills in the same cash register or by following a contaminated bill through an ATM. The GCMS, equipped with a 40,000-compound library of molecules, can also reverse engineer various products to figure out what’s in them.

One use of the microwave digester and the atomic absorbent spectrometer (behind instrument #2) is determining whether bones came from a carnivore or a herbivore. Bones are burned to ash in a furnace (located in a different lab on campus) and then digested and analyzed.

Students use the high-performance liquid chromatograph to analyze the makeup of complex mixtures, finding the caffeine content in sports drinks or the capsaicin level of hot sauce, for example.

One of the most popular updates to the space is the addition of the fume hoods. Previously, hoods were located in the center of the lab, and it wasn’t possible to see through them. The new, transparent hoods are placed on either side of the lab, increasing visibility and safety.

Students from multiple classes can often can be found in the advanced lab synthesizing compounds, making and analyzing molecules and testing and measuring solutions. Someone also has to feed the fish. The 100-gallon saltwater aquarium, a longtime feature in the lab, is home to nine fish, four crabs and several snails. More than just a home for aquatic pets, the tank is a practical part of the Chemical Analysis Lab, which consists of a series of student-designed analyses for the monitoring and maintenance of a tropical marine ecosystem. Collectively, the class monitors 11 chemical species in real-time throughout the semester. “This is an instructional lab that really looks a lot like a real-world experience,” says Hal Van Ryswyk, John Stauffer Professor of Chemistry, shown feeding the fish with Daphne Guo ’19. “Students tell us that this is one of the labs that they enjoy the most.”

Bill Daub, Seeley W. Mudd Professor of Chemistry, appreciates the new space and says it’s a welcoming and friendly space in which to work. His favorite aspect of the lab, he says, is “the engaged, interesting and fun students.” Working in Daub’s Organic Chemistry Lab are Camille
Goldman ’19, Daub, Chris Ye ’19, Liya Zhu ’19 and Chris Doering ’19. Goldman and Ye are making an organic compound that contains bromine, chlorine and iodine.