Computer science and mathematics student Herrick Fang ’19 couldn’t have known it then, but the Mahjong games that his parents played with Derick Lee’s parents in their hometown of San Leandro, California, would set the stage for a long, fruitful friendship and a pioneering smart city incubator program.

Derick Lee is the founder of PilotCity, an organization seeking to create smart cities of the future from within communities. Under the PilotCity University Incubator, in partnership with city of San Leandro and resident tech company OSIsoft, Lee’s goal is to bring back creative San Leandro talent enrolled at top colleges and universities, people emotionally invested in the future of the city. The first person he thought to assist with this endeavor was Fang, whom he’s known since childhood.

“We started the conversation about the incubator in December 2016, when Herrick was on winter break and we were hanging out again, and the recruitment for students happened immediately,” says Lee. “It only took two months for things to start gaining traction. Herrick is the glue of the Harvey Mudd group.”

It was up to Fang to recruit his fellow students. “My view was just to branch out to people I knew in my classes,” Fang says. “I chose some people I had worked with before on projects and asked them for other recommendations.” The team he assembled, all rising juniors when they arrived in San Leandro in May 2017, includes engineering majors Priscilla Chu, Darien Joso, Sati Smyth and Kayla Yamada as well as computer science and mathematics major Elijah Whitsett.

The students lived with homestay families in San Leandro and were provided space for the incubator at PilotCity. Their goal: to design smart trashcans, able to identify fill levels and inform employees maintaining the downtown area when they need emptying through a map display and text messaging. Their client, the San Leandro Improvement Association (SLIA), aims to debut 40 smart trashcans in downtown San Leandro in partnership with the San Leandro Public Works Department and Alameda County Industries.

The team divided the project into three parts: hardware, embedded software and server software. When they returned to HMC in August 2017, the prototype was running. There are a few kinks that need to be worked out, including an issue involving an antenna connecting with the infrastructure in San Leandro, but Fang is optimistic the team will solve any dilemmas. “I’d say that we completed 50 to 60 percent of the work necessary to have a fully working demo,” he says. “We can upload our software to the board now. During the school year, we’re going to see if we can make headway and create the basic set-up for another team or some industry engineers to continue the project with SLIA.”

“The team learned so much about the real world, especially about business timelines,” says Fang. “To be able to create a concept from scratch—from the idea to a deployable prototype and product—is extremely ambitious.”

Such a project was new for all the team members. “I, like many other students, have not had experience with an end-to-end solution that will be implemented in a real-world scenario,” says Elijah Whitsett ’19, who managed the server software. The server accepts the raw trash bin data, stores it and processes it into useful information. It’s also how the trash fill levels are transmitted to the city, through a map display and text messaging.

While the software portion of the project was fairly straightforward, according to Whitsett, he and his teammates learned a valuable lesson. “Once businesses, government and regulations get involved, things are more complicated,” he says. “It takes nearly 10 days to have a printed circuit board returned. We have to worry about the security of the applications and intellectual properties of everything. There are meetings .… These aspects of the project took a lot of time and thought.”

Kayla Yamada ’19 also worked on the software and designed the sensor circuit to take fill-level measurements. She found that many San Leandro residents, those with and without technical backgrounds, were interested about what was happening in their city.

There is palpable enthusiasm for the project within the community and among the stakeholders the students met. Darien Joso ’19, who helped design and assemble circuits, write hardware code and document the API, found it a morale booster. “Every single person we met during our time working on the smart trashcans was genuinely excited to see how far this project would go,” he says. Mechanical housing and PCB designer Sati Smyth ’19 sees “the potential of this project to bring more people in the San Leandro community into tech and to create an example that could lead to other growth and innovation in the city.”

If all goes well, the new smart trash cans will debut in San Leandro in January 2018, in partnership with San Leandro’s Public Works Department and stakeholders, such as OSIsoft, Paradox Engineering and NMB Technologies. According to Lee, Harvey Mudd students may provide training to the deployment partner, such as Public Works employees, to ensure a smooth transition.

Priscilla Chu ’19, who worked on the manufacturing process, is enthusiastic about the impact of the project. “Smart city programs, especially ones involving younger people, are the future! I am a fan of getting people from the community involved in the well-being of their home.” 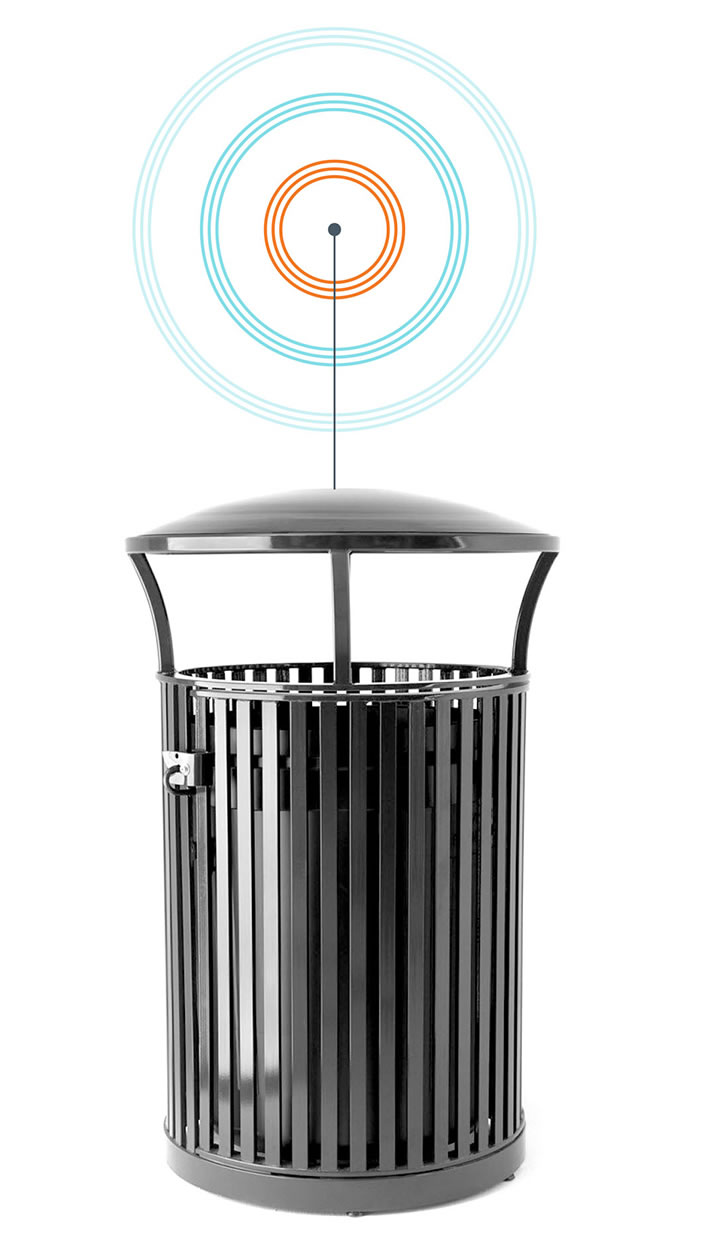