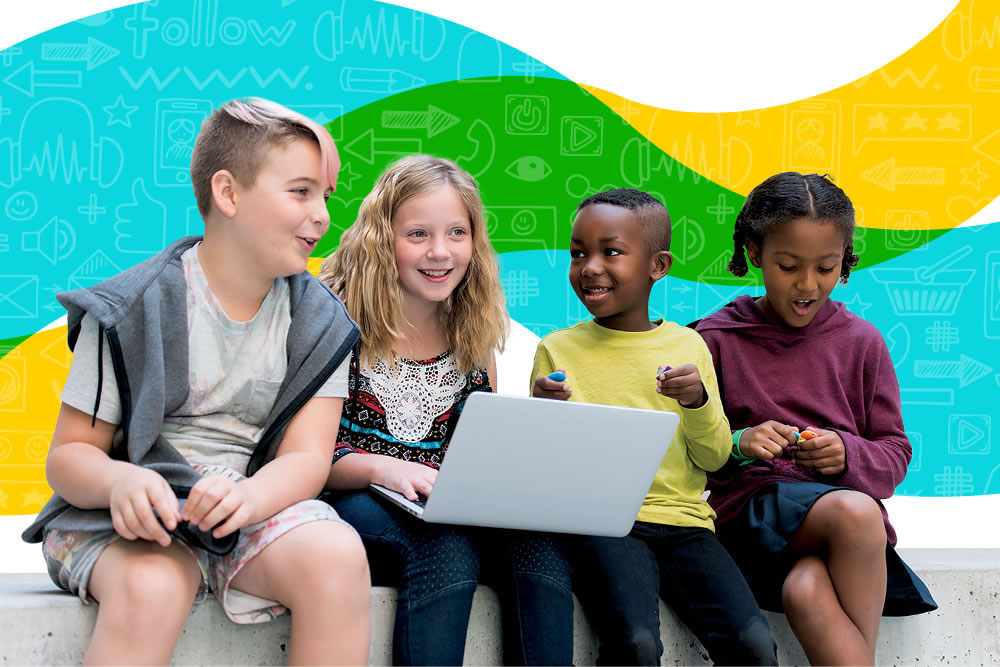 In 2014, Andrew Macrae ’11 was enjoying his job as a validation engineer at Intel. He found working on a supercomputer core with 300 other people to be interesting and instructive. But when a unique opportunity arose for a side project he’d been working on, Macrae decided to quit his day job and become a toy designer, co-founding Linkitz, a company that develops wearable, programmable tech toys for children.

The idea for Linkitz came from Macrae’s co-founder, Lyssa Neel, years earlier when her three daughters were children. “I bought my daughters tech toys, but the toys didn’t captivate them,” says Neel, who has a background in software design. Frustrated by the lack of interesting toys and realizing that the toys that were available were mostly marketed to boys, Neel started imagining a solution. “To serve a more diverse audience, I wanted to make a toy that allowed for a social play experience, unlike the solitary play offered by robot kits,” she says. “I wanted to create a social game that incorporated technology. The idea evolved into Linkitz.”

By the time Neel approached Macrae about helping her design her toy, her daughters had grown up, and she was busy with her career, which had included everything from founding startups and incubators to managing teams as a CEO. But the market for tech toys for girls was still wide open, so she seized the opportunity.

Macrae, who studied engineering at Mudd, was interested in the idea. He agreed to help Neel in his free time, and they began work on their product, a wrist-mounted, programmable hub with interchangeable add-on pieces that perform various functions. Macrae and Neel began fundraising for the project and caught their biggest break when they successfully pitched a proposal to SOS Ventures, earning entry into the HAX hardware accelerator program, which included living and working in Shenzhen, China, for four months.

“It was scary and exciting,” Macrae says of the decision to leave Intel and commit to Linkitz full time. But he was confident that Linkitz could be successful, thanks in part to a class he had taken at Harvey Mudd with Gary Evans, Ruth and Harvey Berry Professor of Entrepreneurial Leadership and professor of economics. “Prof. Evans taught me how to think about which questions will tell you that you have something good on your hands,” he says, adding that Evans also prepared him to understand what he’d need to do for subsequent product versions to satisfy Linkitz customers.

Macrae’s engineering background is apparent in his approach to toy design, to which he brings the same pragmatism he brought to his decision to change careers. “We learn a lot from the toys we play with,” he says. “Most electronic toys teach you that the things you buy should work one way and do it well, but they don’t let you get into trouble or do anything else. That’s not how engineers think about the tools around us.”

The first Linkitz product is a brightly colored wearable cuff. Building around a main hub, children can experiment by adding different components that will allow the toy to perform a variety of new functions. Users can program their units to do things like send secret-coded messages, make sound effects for games and alerts and communicate with the microphone and speaker. Macrae and Neel are almost ready to send their product out to their first customers, the community of people who contributed to a Linkitz crowd-sourcing campaign that raised $100,000 to finance the product’s development.

For Macrae, that users can learn basic computer programming through playing with Linkitz wearables is a core component of the product’s viability. Linkitz’s target demographic is children ages 4–9 who don’t yet have phones of their own but might still be able to program using the family computer. “Part of teaching very young children about programming is showing them that the computers around them were designed by people and that the kids can do that, too,” Macrae says.

However, the main idea is to get young children, especially girls, to engage with the toy so that they might recognize their own potential to thrive in STEM fields. “Kids don’t have to program it,” Macrae says. “It’s still fun to play with, regardless. But if they want to, they can look into it to see how it works. The best thing I can do for them is to have them be in that [high school or college computer science] class and never think ‘Why is this relevant to me?’”

Neel agrees. “I think it is critical to have a diversity of voices designing the technology that is going to be omnipresent.”