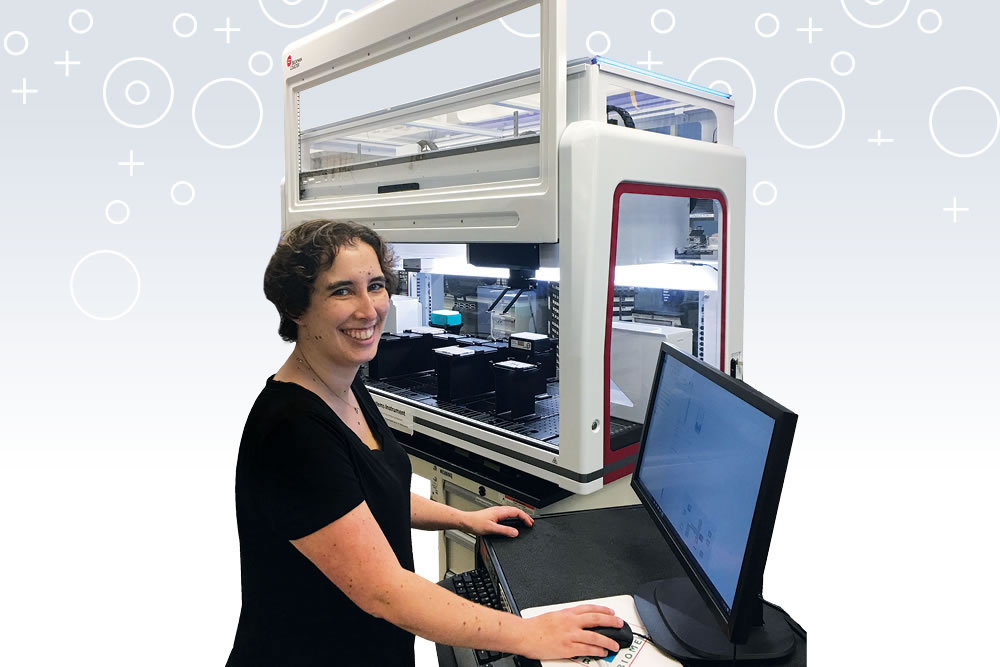 The Biomek I-Series liquid handler a robotic workstation, used to prep liquid biological samples for genetic sequencing, cell analysis and drug discovery. The device, introduced in February 2017, is an intricate mix of chemistry, physics, mechanical engineering, software design and customer communication—all of which helps to explain why Jessica (Fisher) Zeckel ’04 has found her niche.

Zeckel, a staff software development engineer at the biomedical instrumentation company Beckman Coulter, is the software project manager for the Biomek i-Series. Although software is her primary focus at the company, she says, “It’s a universe of disciplines that come together to make instruments like this, and you kind of need to know a little bit about all of it in order to be really successful.”

Her first exposure to software and computer science came in middle school. “I spent a lot of time on the computer, on the fledging internet, and I spent a lot of time chatting with friends and making dorky 12-year-old websites,” Zeckel says. An advanced placement computer science class in high school cemented her interest, and at Harvey Mudd College she received Computer Science Department honors her senior year.

“I came to Mudd as a CS major, but I was always interested in all different kinds of science,” Zeckel explains. “That was one of the things I liked about Mudd: getting to take classes in all the different disciplines, and I think that’s something that’s been really valuable to me here in this job.”

For her computer science Clinic project, Zeckel worked on software for Medtronic MiniMed insulin pumps. “That was an eye opener, to realize that this was even a job that existed,” she says.

One of her favorite Mudd classes was a robotics course taught by Zach Dodds, Leonhard-Johnson-Rae Professor of Computer Science, which inspired her to pursue a graduate degree in robotics at Brown University. But the idea of working in the medical industry still beckoned, and Zeckel went to work for Beckman Coulter after receiving her master’s degree at Brown. “I always wanted to do something that I thought was meaningful and that helped people. But a lot of times in computer science you hear more about video games and Google and Microsoft and all these companies, and there’s not as much talk about all the other industries that need computer science people.”

At Beckman Coulter, where she has worked for 11 years, she’s able to utilize her broad education and her fundamental knowledge of all the sciences and mathematics. Her first project was to develop software for a flow cytometer, a device used to count, sort and analyze different properties of cells by suspending them in liquid and passing them through an electronic detector. In clinical and research settings, flow cytometers are used to diagnose blood cancers, among other applications.

The device introduced Zeckel to the broad challenges of such work, she says. In the case of the flow cytometer, she had to learn more about human immunology, the chemistry of fluorescent markers attached to antibodies in the blood and the physics of the lasers inside the device that excite the fluorescent markers. Zeckel also had to consult with the researchers who would be using the device to find out how software could help them visualize the cytometer’s readout.

The researchers asked for things like color coding of data plots, and Zeckel and her team were able to drill down to understand precisely what they needed to identify unique subpopulations. “By providing new, multidimensional visualizations, we enabled them to more easily identify those populations of cells,” she says. Such customer interaction is a passion of hers. “I want to find out the thing that they need that they don’t know how to ask for.”

When she began work on the Biomek liquid handlers, Zeckel and her team of about 30 software engineers and software test engineers consulted often with the mechanical and electrical engineers developing the hardware. “It can be challenging to work with hardware that’s still under development,” she notes. “Any changes that we make could have a ripple effect through the whole system.”

These consultations are key to helping Zeckel develop the interface that her customers will use—the screens, the buttons, the commands, the output options, the customization and automation, and the data synthesis. Her understanding of what the instrument will be used for and how it operates, she says, helps her make the device intuitive and appropriate for the customers: colleges and universities, government and commercial research labs, agricultural labs and testing facilities, pharmaceutical companies and hospitals. With a larger deck to hold more samples and a largevolume multichannel pipette head, the new Biomek i-Series liquid handler is a valuable tool for cancer researchers and other scientists, says Zeckel.

The science, the collaboration, the testing, the development and the deployment merge to make the work tremendously satisfying for Zeckel. She says, “Helping people and knowing that the software that I wrote is being used by cancer researchers looking for a cure, that’s important to me.”