The Parsons Building basement isn’t what it used to be, but Mudders aren’t complaining. The vibrant work area encompasses roughly 7,900 square feet of dedicated Clinic space and features two wet labs, 14 private “pod” workrooms, two common assembly workrooms and a dedicated conference room. The renovation included improvements to infrastructure, including new elevators, upgrades to HVAC controls and a new fire alarm system. The fabulous and functional area, made possible by funds from engineering endowment and Mike and Mary Shanahan, was designed by RBB Architects and is part of a long-term project to renovate the Libra Complex.

“The new space is exciting because it’s so open,” says Jessica Szejer ’16 (not pictured), a member of the Proteus Digital Health Clinic team. “You really get to see what everyone else is working on. It’s cool getting to view and experience the awesome devices and prototypes that you would otherwise only hear about.” 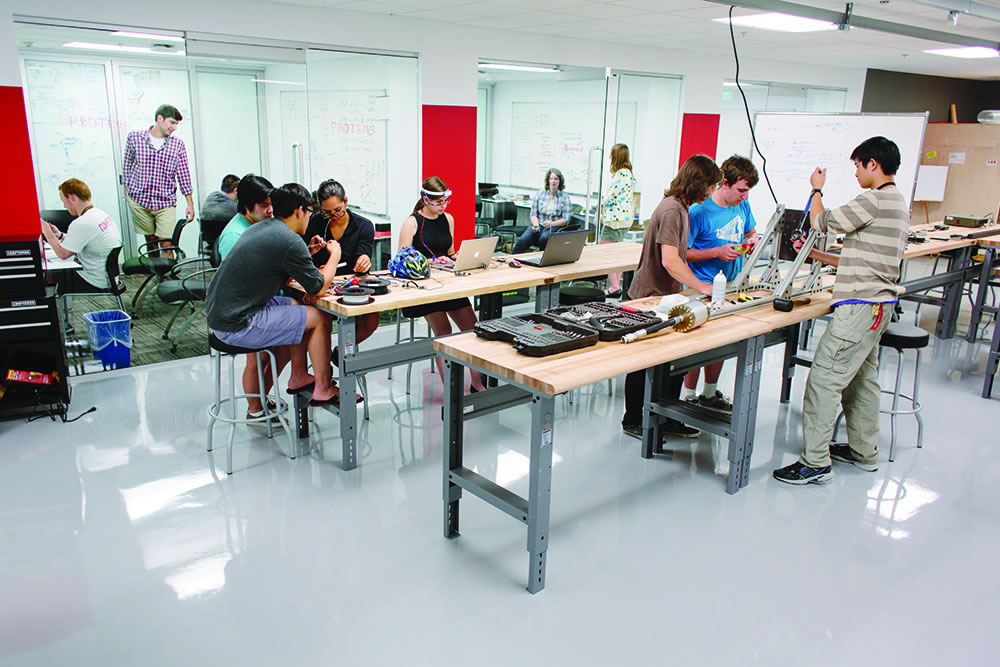 In a common workroom, Peter Orme ’15, Ryland Miller ’15 and Sherman Lam ’16 assemble a test rig for drogue parachute deployment on a spacecraft. The Blue Origin Clinic team is attempting to build a deployment mechanism for drogue chutes that will be less hazardous than the explosive charges typically used. Drogue parachutes are deployed when a spacecraft is preparing to land, helping stabilize and slow down the craft. The team’s prototype uses a solenoid valve to release high-pressure helium gas into a mortar tube, which expels the chute without an explosion.

“The large Clinic space has made it very convenient for us to assemble all the components of this large rig,” says Lam, whose team works under the advisement of engineering Professor Mary Cardenas. “We typically place the rig on one table so all five team members can work around it with various wrenches, Allen keys, Teflon tape, bolts and nuts spread out across all the other tables.” The light wood-top tables are easy to maneuver so teams can customize their workstations.

The City of Hope (COH) Tracking Team is building a wearable device to monitor signals related to fatigue and to stream real-time video of an operation from a surgeon’s point of view. Here, COH team member Nicole Kowtko ’16 (right) and friend Risa Egerter ’15 don prototypes, while teammates Cindy Angpraseuth ’15 and Ben Teng ’16 examine design components. By monitoring surgeons in the operating room, data could be used to educate and improve safety.

The central doors in the private pod rooms serve as whiteboards where teams can crunch numbers and jot notes. Several portable whiteboards are also placed throughout the common area for important information—and the occasional joke or inspirational message.

To prevent tripping on cords and to ensure easy accessibility, electrical outlets line the ceilings, giving teams the ability to plug in all necessary electric tools.

The Honeywell Clinic members occupy one of the team-dedicated Clinic pods, in which components can be safely secured. Honeywell team members—including juniors Christie Zeeb (seated) and Nicole Kyle—are working on improving a self-contained breathing apparatus, using computer simulation and experimental testing to reduce facemask pressure noise and drift caused by the second-stage regulator.

The Proteus Digital Health Clinic team is adding functionality to an existing wearable device by using optical detection techniques to measure biological signals from the torso. Here, Demetri Monovoukas ’15 (standing) and Matias Farfan ’16 analyze data collected from a blood pressure-measuring device that employs an LED-based optical method. The team has constructed algorithms for these data to provide useful information for patients and caregivers. “One of my favorite parts about the new Clinic space is that it encourages collaboration,” says Monovoukas. “The fact that you can walk over and ask a classmate for help or advice on your project is very valuable.”