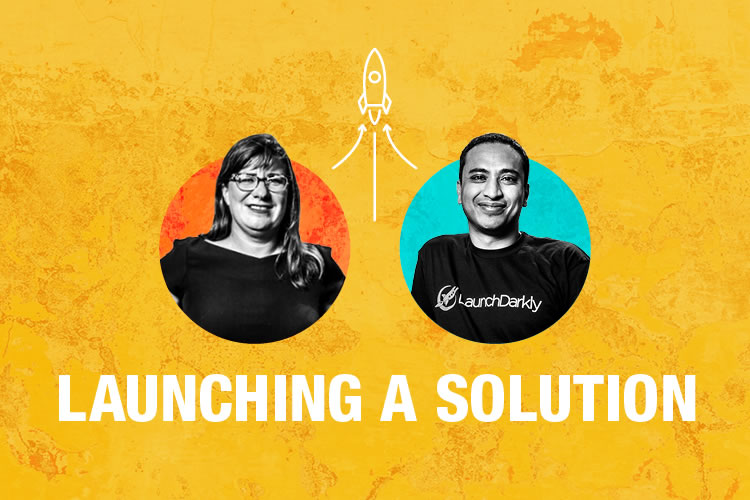 Graduating as valedictorian of her high school class at age 16, earning two bachelor’s degrees by the time she was 20, and holding a patent at 23, LaunchDarkly CEO and co-founder Edith Harbaugh ’99 is accustomed to being ahead of the curve. Co-founder and CTO John Kodumal ’00 bypassed his senior year of high school to study at Clarkson University in Potsdam, New York, and also holds a patent.

Harbaugh and Kodumal, who met at Harvey Mudd in 1998, each had several jobs with technology startups (Kodumal as a PhD at Berkeley; Harbaugh in engineering, products and marketing) before deciding LaunchDarkly could fill a gap in the marketplace. They founded the continuous-delivery, feature flag management platform in 2014, allowing companies to efficiently roll out new software features while minimizing the risks involved. Over 500 customers, including QVC, AMC, GoPro and Meetup, use the platform.

Software developers can control the rollout of new code using feature flags, which are decision points in the code, similar to a fork in the road. Instead of launching a new feature to all users simultaneously, LaunchDarkly’s platform allows developers to send just a portion of users—for example, 3 percent of users, or only those in a particular city—down the new pathway, while leaving everyone else on the original path. That way, if there’s a bug in the code, it doesn’t wreak havoc for all users. Developers can also evaluate whether users enjoy the feature. If they love it, developers can roll out the feature more broadly, but if they hate it or if there’s a bug, developers can quickly turn off the new code and revert to the original code. Feature flags can also divert users for other reasons, such as to comply with a law particular to one state.

Some companies have engineers in-house to manage such responsibilities, but other companies cannot afford, or just don’t want, a team dedicated to this work. Without the capability of feature flags, though, the new code is binary—either on or off— so there’s no way for the company to mitigate any user frustration.

“That’s one thing I like best about LaunchDarkly—we really help developers,” Harbaugh says. “Instead of suffering from a bug for hours or days, you can just turn it off without going into the office. So our customers’ lives are better. We’re breaking silos between product and engineering.”

Such trailblazing work has caught the eye of peers in the industry. Harbaugh was honored as one of the 2018 Top Women Entrepreneurs in Cloud Innovation by CloudNOW, a nonprofit focused on the professional development of women in cloud computing.

“Edith is part of a new wave of leaders, entrepreneurs and technologists,” says Jocelyn DeGance Graham, founder of CloudNOW. “We applaud her technical accomplishments in creating a platform that reduces risk from software development, as well as her contributions to diversity and inclusion as she blazes trails supporting the next generation of tech leaders.”

Kodumal is continually iterating to find the best way to scale to demand. He recognized that GoLang, a programming language that he didn’t previously know, would work best for LaunchDarkly, so he learned the language as he built the company. Kodumal explains that the language is best because it optimizes reading rather than writing code, allowing all collaborators to understand what is written. Because LaunchDarkly manages tens of thousands of requests every second (over 200 billion feature flags daily), it’s critical employees understand immediately what’s happening and address any issues that arise.

Beyond their mutual admiration, the CEO and CTO say they complement each other’s strengths: Harbaugh looking at things from the product management side and Kodumal from the engineering side. While Kodumal admits he pushes for perfection and Harbaugh says she’d rather get things out the door, they don’t find their differences problematic.

“We work well together because we’ve known each other 20-plus years, and we have a deep foundation of trust,” Harbaugh says.

Kodumal agrees. “I have absolute faith she has my best interests and the best interests of the company at heart. That’s enormously valuable as a cofounder.”

Harbaugh believes the CEO should be a company’s No. 1 salesperson, adept at identifying customers that would benefit from LaunchDarkly’s services. She credits working at Harvey Mudd’s alumni phonathon with honing that ability.

“The phonathon trained me to be a salesperson,” she says. “Every night, we got call sheets of who to call, and I wanted to get the most donations. I sorted my sheets into the best candidates to donate, usually 20 to 30 years out of school. It also helped me learn to deal with rejection and build rapport.”

Harbaugh and Kodumal have also fostered a strong rapport with their employees by building a positive company culture. “Work is not life” remains one of their core values. Having time for family and personal activities, Harbaugh says, gives their nearly 100 employees a healthier mindset. The cofounders also give employees a $2,500 yearly education stipend.

“We’re not just creating a software product; we’re creating a company,” says Harbaugh, who manages her own health by running marathons and ultramarathons. She has more than 30 marathons under her belt as well as three 100-mile races. (Her best finish was 29 hours.) She decided to give up the longest races in favor of spending more time on the company, but she occasionally runs 50K ultramarathons for fun. Kodumal loves rock climbing.

As more of people’s daily interactions are software-driven—in the bank, at the grocery store, in their car—Harbaugh believes LaunchDarkly will remain a tool sought after by developers.

“People are moving to the cloud and need new tools like LaunchDarkly,” Harbaugh says. “They are demanding better software, and developers must work hard to get it right. LaunchDarkly will help them get there.”