It’s a gloomy, rainy day in February. Hixon Courtyard is empty, wet and quiet, except for the sound of rain falling into the koi pond. In colorful contrast, beyond large glass doors on the west end of the courtyard, Galileo Hall is alive with activity. Inside, more than 100 people are participating in a World Cube Association (WCA) competition, organized by Adam Walker ’22 and the Harvey Mudd College Office of Community Engagement. 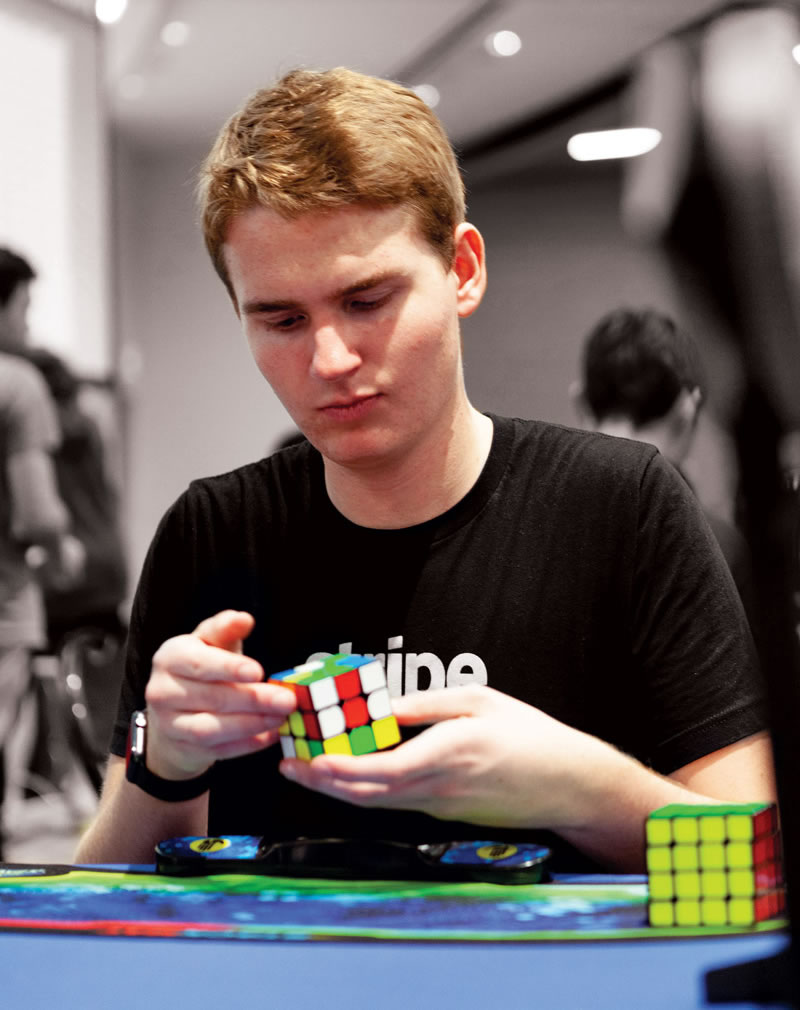 Sitting in Galileo’s sea of blue chairs, milling around in the aisles and waiting their turns to compete are children and parents, teens, college students, and a handful of adult participants. Almost everyone in the auditorium is in some stage of solving a Rubik’s Cube or similar cube puzzle; a few are focused on Pyraminx puzzles (like the cubes but in pyramid shapes). Large screens in front of the auditorium display the day’s schedule, showing the order of competitors for each round of each event (3x3x3 Cube, 4x4x4 Cube, 5x5x5 Cube, 3x3x3 One-Handed, and Pyraminx). The atmosphere is friendly, with the colorful squares of so many cubes looking like a cheerful sprinkling of confetti throughout the room.

Amid the frenetic scene, Walker sits still except for his hands, which are moving quickly and nimbly to solve a 3x3x3 cube. The stone-faced fifth grader to his left, a competition judge, watches patiently until the puzzle is solved. It doesn’t take long: 8.77 seconds after picking it up, Walker returns his cube, solved, to the table in front of him. A digital clock displays the time, Walker’s best of the day, in red LED.

The judge records Walker’s time on a slip of paper which they both initial, then Walker takes his cube and his time to a long table at the front of the room, where more judges record his results on their computers and advance his name to the next round. After that, he’s off, switching back into the busy role of event organizer.

A native of Las Vegas, Walker has been cubing since he was 10 years old, when boredom at a party led him and some of his friends to attempt solving a cube for the first time. Frustration sent them to YouTube for video tutorials on how to solve the puzzle. That night, after his friends had lost interest and moved on to something else, Walker remained in front of the computer watching the tutorials. “After about three hours of videos,” he says, “I was able to solve it in about three-and-a-half minutes.”

With constant practice and more videos, Walker eventually got his time down to about nine seconds. That’s when, at age 12, he entered his first competition, and he hasn’t stopped cubing since.

For anyone who’s never been to a WCA competition, the first experience is illuminating. The WCA holds events in more than 100 countries, where regional organizations are responsible for organizing local competitions. With more than 125,000 registered competitors worldwide, WCA events can draw large crowds. Competitors range from elementary school students to retired adults, with the majority being in their early to late teens. Not unlike a track meet or other organized sporting event, the crowd at a WCA competition is made up of competitors and their families. But unlike other events, a WCA competition is run, governed and executed by the competitors, who take turns judging and competing. This format inspires a friendly, fun atmosphere in which even a novice cuber feels comfortable. For Walker, it’s that feeling of community and fellowship that matters most and keeps him involved.

“To me, competing is more about community— meeting other cubers,” he says, than it is about winning or losing. “You can be put in the same group as someone like Max Park [a speed cube world record holder who attended the Harvey Mudd competition]. The WCA doesn’t have any division based on skill or age, etc.”

Walker describes his 12-year-old self as “that nerd who solves cubes and doesn’t really fit in.” When that nerd entered his first cube competition, he found a place where he did fit in. “It was a fun escape in middle school,” he says. “I started going to competitions and meeting all kinds of people that way. I still have a lot of those friends today.”

Several of those friends came to Harvey Mudd to help Walker execute the WCA event on campus. His parents also made the three-hour drive from Las Vegas to support their son, something they’ve grown used to doing as his participation in the cube community deepened over the years. It’s a trajectory familiar to many parents whose children discover a passion for something. They find they’ve become passionate about it as well and commit to spending their weekends driving to nearby and far-flung competitions. One parent at the Harvey Mudd event described herself as her son’s “cuber Uber.”

“When I first started competing, I think my parents thought it was cool, but maybe didn’t see much practicality in it,” Walker says. “But they’ve been really supportive.”

Though Walker isn’t really concerned about his hobby being practical (“I just think it’s fun,” he says), since coming to Harvey Mudd, he’s begun to see that his hours of cube puzzle practice are paying off in ways beyond fast competition times. “Once, in a chemistry class, I was trying to think of crystal structures, trying to think of where the holes are between the atoms, and using some of the different cube shapes, I was more easily able to visualize it,” he says.

Like his first cube competitions in middle school, Harvey Mudd is a place where Walker feels like he belongs. “My motivation for cubing continues to be the community,” he says. “I really want to organize more competitions at Mudd. All of my friends were saying what a great venue it is. This is one of the reasons why I chose Mudd. I can do stuff like this and no one’s looking at me funny. People think it’s cool and are supportive.”

Indeed, cubing events do seem like a natural fit for the Harvey Mudd community. “Maybe a quarter of the students know how to solve cube puzzles,” says Walker. Walker was able to recruit Delaney Cohn ’22, Eric Brandon Chavez ’22, Jason Chen ’22, Kyra Clark ’22, Ryan Martinez ’22, Shanni Lam ’22, Sidney Cozier ’20 and Jacky Lee ’20 to the competition, and he hopes to expand the number of Mudder cubers. “For how many people at Mudd solve, it would have been nice to see a few more people compete,” he says, reiterating that the competitions are friendly and focused on community more than winning or losing. “There were at least 30 people at the event who had never competed before,” he says. “There’s two reasons to compete: One is to meet other people in the cubing community and the other is to challenge yourself and set individual goals. For most of us it’s not about winning the competition. It’s about individual accomplishment and community.”

Walker worked with the Harvey Mudd Office of Community Engagement and its director, Gabriela Gamiz, to organize the WCA event. Gamiz says she’s eager to keep the momentum going around building a cubing community at Harvey Mudd, and hopes to support Walker in this endeavor. “I definitely want to organize more competitions at Mudd,” Walker says. “Maybe start a cube club.” For now, time is a constraint—as a WCA delegate, Walker attends competitions every two to three weeks, making time for cubing around his school work and his other favorite activity: writing code.

One of the WCA’s stated goals is for people from all over the world to have fun together in a friendly collaborative atmosphere where people help each other. That seems to be what happened at the Harvey Mudd event. At the end of the competition, Walker was exhausted and content. “It was a great event,” he says. “Knowing that so many people are having a good time is really cool.”

Walker’s tips for the cube newb