It’s the Year of the Periodic Table (designated by UNESCO to celebrate the 150th anniversary of its invention). In the 150 years since Russian chemist Dmitri Mendeleev first developed it, the periodic table has become one of science’s iconic figures, recognizable by students and scientists around the world. 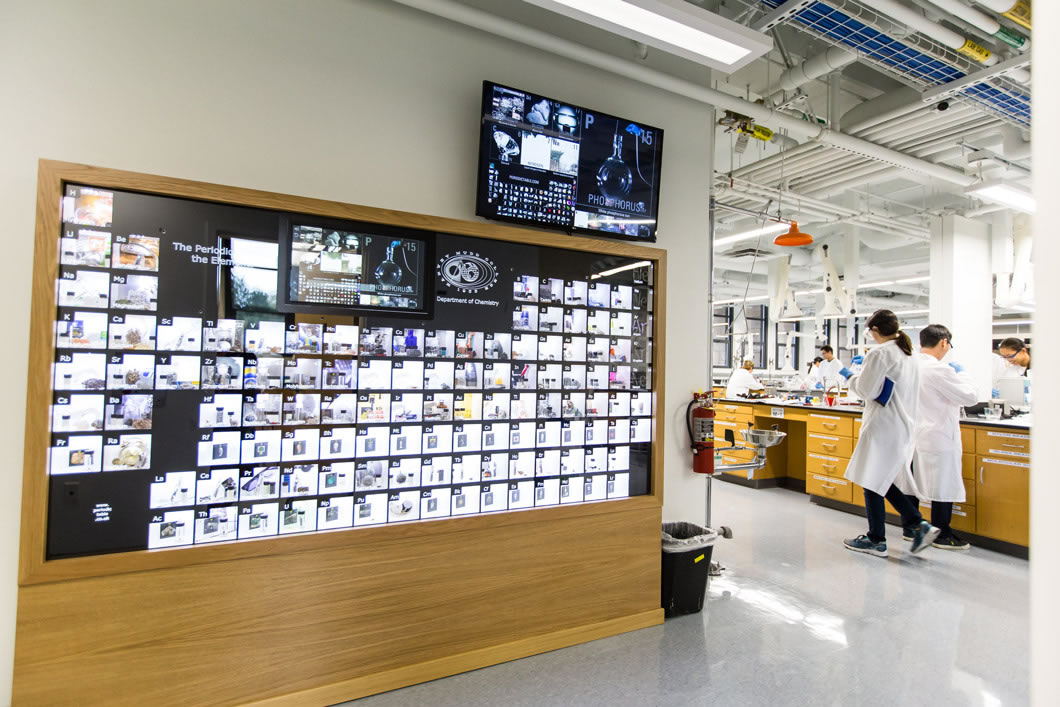 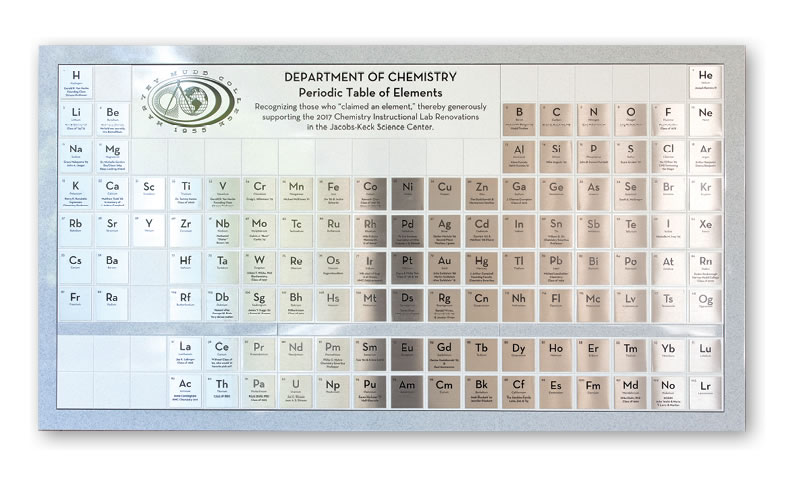 The Harvey Mudd College Department of Chemistry is home to an eclectic collection of periodic tables, some of which might surprise Mendeleev, even though he predicted his original version would change over time as more elements were discovered. Were he to climb the west stairwell of the Jacobs-Keck Science Complex today, Mendeleev would see 20 unique posters featuring periodic tables inspired by his own, but some with elements unimaginable in his time. Included in the stairwell collection are the periodic tables of sandwichry, elephants, fruits and nuts, ice cream, wine, monsters and more. 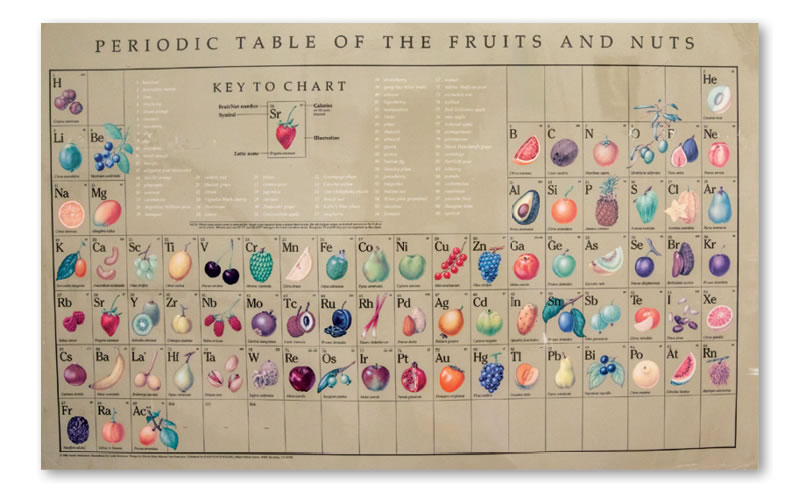 “The posters were given to the department over the years by students and friends,” says Kim Young, the chemistry department administrative coordinator. Young’s favorite is the Harry Potter periodic table, designed by Laura Haushalter, daughter of biology and chemistry professor Karl Haushalter. “It’s very clever,” Young says.

Laura got the idea to make the table in 2015 (she was 11), when she needed a project to help her learn Excel and become comfortable on her new computer. “I always loved visiting the periodic tables at HMC and wanted to make my own with a theme I loved,” she says. 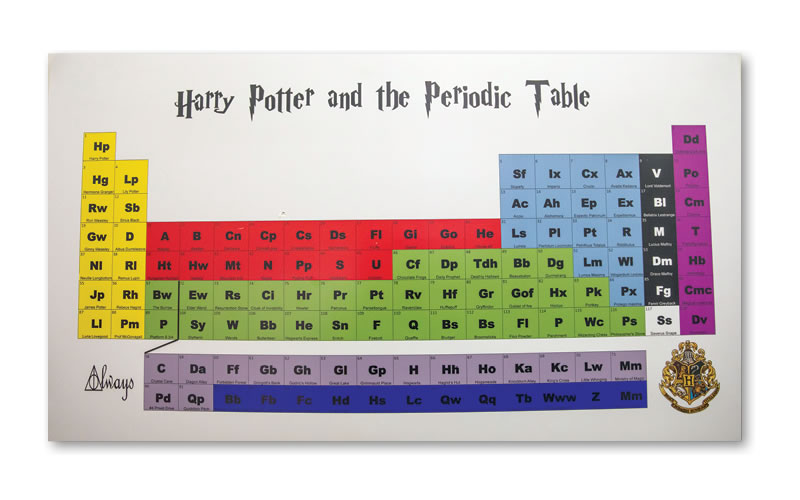 The color categories represent different parts of the Harry Potter world. “There are categories like heroes, villains and spells,” Laura says. “For example, yellow is heroes, so you will find Harry Potter’s element there, and black is villains, where you will find Lord Voldemort’s element. There are the same number of elements as the standard periodic table, and I tried to make it accurate in the layout of the table. To create the elements, I started by creating lists of my favorite parts of Harry Potter and then found how they could be put into groups.”

Another table, displayed on the exterior north wall of the Jacobs Science Center, was added to the collection during the chemistry laboratory renovations in 2017. The result of the Claim Your Element campaign, the table’s 118 elements were made available for dedication by donors in support of the renovation. The display is a celebration of the Department of Chemistry, featuring elements claimed by alumni representing each decade of Harvey Mudd history, current and past professors and other members of the Harvey Mudd community. A few elements have yet to be named. 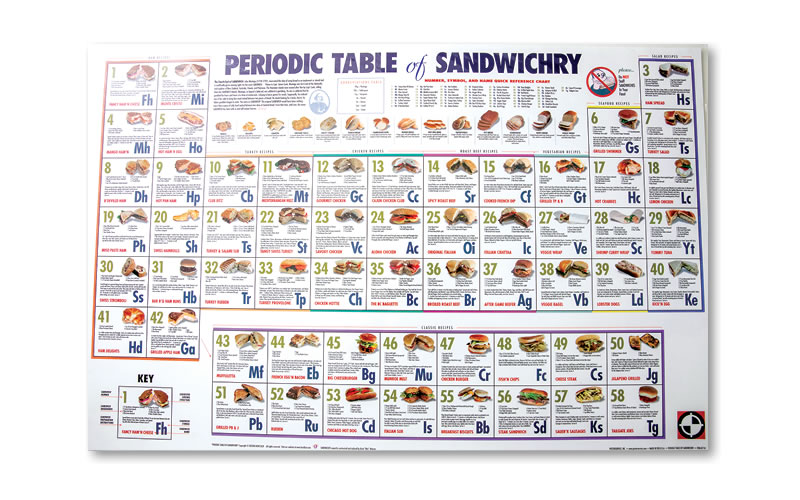 Mendeleev is said to have been defiantly unconventional, so it’s possible he’d very much enjoy the posters and the named elements (element 101, Md, Mendelevium, discovered and named for him in 1955, was claimed by Mike Diehr ’90). However, if he’d favor a more literal periodic table, he’d likely have his mind blown by the newest and perhaps most impressive addition to the collection.

Housed in the Rose Hills Foundation General Chemistry Laboratory, is an interactive periodic table of the elements with lighted displays and video animations. A gift from John Benediktsson ’01 and his spouse, Rajashree Karwa, the story of how the table came to Harvey Mudd is a popular one. “Benediktsson found this little two-person artisan shop in the UK that made these exquisite periodic tables, complete with video animations, facts and example compounds, all mounted in a very nice (and large) cabinet,” says Hal Van Ryswyk, John Stauffer Professor of Chemistry and department chair. “He wanted one for his home, but his wife suggested that he should find someplace else to put it, preferably where he could visit it. We were extremely lucky that he chose us. It’s a grand resource, both for our students and for tours of prospective students and their families.”