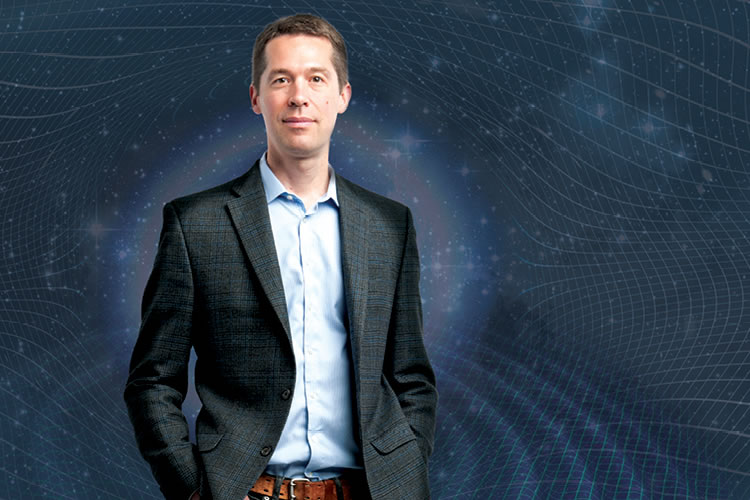 A ripple in the fabric of space-time, generated by the collision of two black holes 1.4 billion years ago, was detected on Earth late last year by two identically sensitive instruments.

Powerful ripples of this type, called gravity waves, were predicted by Einstein 100 years ago, but he speculated such signals would be so faint reaching Earth that they probably never would be detected.

Proving him right—that gravity waves exist— but wrong in his pessimism is physics graduate and MIT physicist Matthew Evans ’96, who worked for almost two decades to help create a detector sensitive enough to register a distortion less than the diameter of a proton.

The detection process at two widely separated LIGO (Laser Interferometer Gravitational-Wave Observatory) sites in Livingston, Louisiana, and Hanford, Washington, works like this: Each site splits a laser beam so that it passes along two arms arranged orthogonally to each other—like the letter “L”—with each arm four kilometers long. If no disturbance is experienced by either wave, the light beams finish their journey perfectly in phase and no signal is produced. When a gravity wave strikes, however, its tiny contractions and expansions stretch and squeeze space-time, shortening one arm of the detector and lengthening the other. This puts the two beams slightly out of phase, which creates a measurable signal.

On Sept. 14, 2015, both LIGO sites detected that signal and produced quarter-second squawks.

Evans describes himself as “sleeping happily at home in Cambridge” when the instruments spoke.

“I woke to the news a few hours after it happened,” Evans says. “My first reaction? Incredulous. I think I can speak for most of the collaboration when I say that we really didn’t expect to have detected anything. But after I got done with a first pass through the data, by the end of the day I was pretty sure it was real, and at that point I faced an existential struggle: I had been working for 20 years with the goal of making an interferometer that could detect something, and now that nice clean goal was behind us.

“But, I am not one to dwell too much on such things; the next goal is clear enough.”

Evans speaks of the importance of gravity waves in providing humanity a whole new eye on the universe—a means of “analyzing black holes, which are the dinosaur remains of long-dead stars,” he says, or the physical structure, “not just the composition”, of neutron stars. “Are they hard? Are they squishy? Do they have mountains on top?” The waves may help us better understand gravity itself.

The project leveraged my work at Harvey Mudd, but in a different context. I wrote LIGO’s first simulation codes, not about the astrophysics but just to make the device work. There’s a lot of physics and technology that goes into the instrument itself.

Evans entered the field initially as a graduate student. At Harvey Mudd, he had specialized in biophysics, spent time in a computer science lab and worked on a computer simulation of an interferometric microscope, a device that superimposes electromagnetic waves upon each other to gain information.

In graduate school at Caltech, however, he was offered work analyzing monkey brains. Looking for a more personally compatible direction, he was given the task by his graduate advisor of making a simulation of the LIGO interferometer. The project, with ongoing funding but no successes to its name, was little known at the time except among scientists and science buffs.

“The project leveraged my work at Harvey Mudd, but in a different context,” Evans says. “I wrote LIGO’s first simulation codes, not about the astrophysics but just to make the device work. There’s a lot of physics and technology that goes into the instrument itself.”

He jokes that he focused on the device, not on its potential subjects—quasars and black holes—because “general relativity was the worst grade I got at Harvey Mudd.” The grade wasn’t that bad, a B+ in a relativity course because he didn’t notice there was one more page to the final exam. Still, he became an experimental physicist rather than a theoretician.

“A lot of what [experimental physicists] do, engineers could do better,” he says modestly, “and at LIGO, there’s a tremendous amount of engineering involved. But, we physicists add cutting-edge ingredients to come up with new experiments. You have to understand many aspects of physics—not a deep knowledge of one subject, as in atomic or molecular physics, but a complete, basically undergraduate knowledge of many subjects like electricity and magnetism, statistical mechanics, classical physics and quantum mechanics.”

As a graduate student and then post-doc, still at Caltech, Evans travelled between work locations at MIT and the two LIGO sites, creating models and designing parts. He traveled to see how his parts worked on site, then redid his model and created new parts. Before starting as a research scientist at MIT in 2007, he also aided ongoing construction of a third gravitational wave observatory in Italy called Virgo that is only 3 kilometers long because of geographic limitations. A fourth site, in Japan, is under construction.

“I spent time doing designs and construction until 2013, trying to better isolate the devices from ground motion as well as create an active, three-layer isolation system with active feedback,” he says.

“There are of course quantum and thermal limitations to the LIGO method,” he says. “We position the mirrors at room temperature, not cooling them, because with a megawatt of light on the mirror, it’s hard to keep something cold and, in fact, it is a pretty good way to make something warm. And, given the quantum nature of light, we can only measure photons to a certain point.”

The two LIGO sites allow for independent verification of the arrival of a wave, always good to counter the possibility that some other factor caused an individual detector to register. “The signal reached Hanford 6.9 milliseconds after Livingston. The straight-line distance between the two should take light 10 milliseconds of travel time.” The time gap between the readings is used to get a better handle on the direction from which the wave has arrived, a process called “sky localizing.”

What will he do next? “The big media interest is over, now that we’ve had our first direct detections,” he says. “But, we now have a new way to observe black holes, mountains on neutron stars, gravitational blasts from supernovas, remnant waves of the Big Bang …”

Last December, another ripple from two intersecting black holes was recorded by LIGO. Thanks in part to Evans’ work, the age of gravity-wave astronomy seems ready to take its place among humankind’s tools that explore the universe.