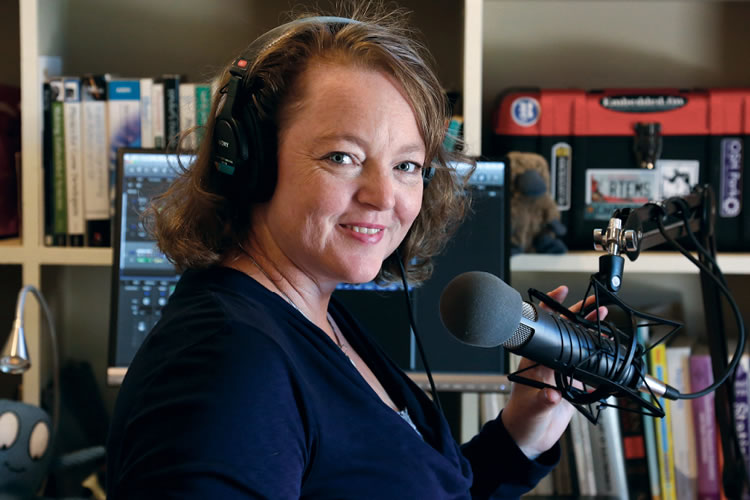 “We were going to  do just six,” says Elecia White ’96 with an amusement only hindsight can afford.

She’s referring to the number of intended episodes of Embedded.fm, a weekly, 60-minute podcast created and hosted by Elecia and her husband, Christopher White ’96. Now, a whopping 170 episodes later, the pair is busy as ever talking to makers, entrepreneurs and scientists of all stripes about the “how, why and what of engineering,” with particular devotion to devices. Guests have included YouTube sensation Simone Giertz (the self-proclaimed “Queen of Shitty Robots”), tech entrepreneur and author Dan Shapiro ’97 and “All Things Considered” host Kelly McEvers.

For her part, Elecia is amazed by how far the show has come from its meager six-episode goal. With between 6,000 and 8,000 downloads per show and roughly 20,000 RSS subscribers, the show and its accompanying blog have afforded the hosts a modicum of internet fame and, with it, a steady stream of guests. In the beginning, they relied primarily on industry and alumni connections to find guests. Elecia says, the show is “big enough now where people will come to us,” though she also searches for authors, speakers and entrepreneurs whose brains she wants to pick.

“We’ve had slow and steady growth, so a lot of it is just about continuing to do what we do, to revisit topics that change or that people want more information about and to stay relatively current with new stuff,” says Elecia. This isn’t terribly difficult: Her day job as a consultant keeps her steeped in the latest industry happenings. Co-owned and -run with Christopher, the consulting firm Logical Elegance specializes in firmware for resource-constrained embedded systems, helping clients take ideas through creation, implementation and manufacturing, resulting in embedded systems technology that values both design beauty and social implication.

“I am a big believer in understanding how your engineering affects the world,” says Elecia. It’s a sentiment hardwired into her even before attending Harvey Mudd, and one she has carried forward to this day. Logical Elegance’s diverse client list includes socially conscious endeavors like educational toys, medical devices and gunshot location systems. And, working in embedded systems keeps her in her preferred element between engineering and computer science. At Mudd, Elecia designed an individual program of studies that married computer science with systems and theoretical engineering.

“I took all of the applied CS courses,” says Elecia, “anything where I had to actually touch a computer and program. I also took every systems engineering course. This set me up to do signal processing and control software. Between children’s toys and education systems and inertia sensors and DNA scanners—all of these things I’ve gotten to work on. I could not have designed a better major.”

In fact, she entered Harvey Mudd with the intent of studying pure engineering, but her experience in the school’s fledgling CS department changed that. “CS is natural to me, yet I never gave up the love of engineering, and that’s how I ended up split between them,” she says. Listening to the wide range of topics discussed on Embedded.fm, the dual nature of Elecia’s passion becomes all the more evident.