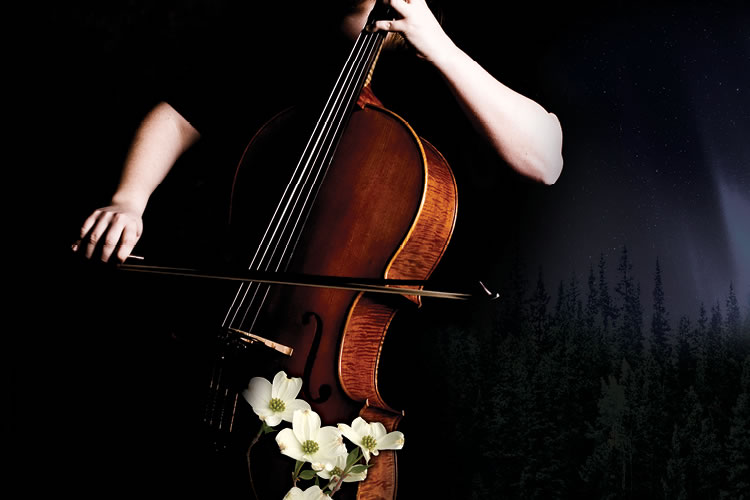 When one’s multifaceted persona includes statistician, scientist, wife, mother and musician, adding yet another might seem overwhelming. But Susan Lubetkin ’94 has mastered the interdisciplinary life and has taken on what may be her most challenging role yet: activist.

During the last few years, Lubetkin and a close friend have been orchestrating a climate change revolution.

Terra Nostra (Our Earth), a 30-minute multimedia symphony about climate change, grew out of Lubetkin’s combined passion for symphonic music and science. In collaboration with composer, conductor and friend, Christophe Chagnard, Lubetkin set out in 2013 on a mission to produce a symphony that translates the global and local implications of climate change through music, poetry and powerful imagery. The work debuted in 2015 in Seattle as part of the 20th anniversary season of the Lake Union Civic Orchestra (LUCO). Since then, she and Chagnard have continued to work on Terra Nostra, securing rights to images, brainstorming ways that the 30-minute production can be used for education and for climate advocacy, and working on a professional recording for wide release.

For Lubetkin, a LUCO veteran and one of the first graduates of the HMC biology program, the motivation behind Terra Nostra stems from her desire to communicate science in a “non-science” way. Information about the impact of climate change has not been easily accessible to everyone, she says, and it should be.

“When scientists talk about glacial loss and what a change of 2 degrees Celsius means over decades, it doesn’t really help,” says Lubetkin, referring to the 2 degrees of warming that scientists regard as the point at which climate change becomes dangerous. “The American public doesn’t think in Celsius. Most of us are never going to see a live polar bear. This all can be fleetingly emotional, and the images we’ve seen on climate change impact can feel distant and not relevant.”

Lubetkin, who is a longtime member of LUCO and plays the cello in Terra Nostra, considers music fundamental to her being. She began playing the violin in the fourth grade, then switched to the cello a year later. She played throughout her college years, including with the Claremont Concert Orchestra, and during her graduate school years studying quantitative ecology and resource management at the University of Washington. Lubetkin got the idea for Terra Nostra after playing Shostakovich’s Ninth Symphony, which is about the horrors of war. She recalls saying, “We need to have a symphony like this about climate change.”

Galvanized, Lubetkin sent Chagnard an email with the subject line, “Totally nuts, probably impossible, poorly formed idea … and a dinner invitation.” After working for 20 years with Chagnard, music director at LUCO, former faculty member at the Berklee College of Music in Boston, and co-founder and music director of the Northwest Sinfonietta, Lubetkin knew he was the right person to bring her idea to life. He took 18 months to conduct research on climate change and compose Terra Nostra.

“The piece is very structured and deals with the notion of time and how phenomena, such as glacier disappearance and prolonged drought, are now occurring at a faster rate,” says Chagnard. “Time is no longer on our side, and I wanted to convey this sense of vital urgency.”

Chagnard and Lubetkin launched a Kickstarter campaign to broaden the reach of Terra Nostra (terranostra.org), and they met the fundraising goal. (She notes that Mudders were fabulous supporters.) They hope it will appeal to schools and community groups as well as to local and state-level advocacy programs. In future iterations of the climate change symphony, Lubetkin envisions communities adding their own poetry and images from their surroundings, essentially building a customized symphony about how climate change is impacting them.

“We want to help people answer three questions about climate change for themselves: What does climate change really mean? Why should I care now? and What can I do?,” adds Chagnard. “Very few issues touch nearly every life on this planet, human and otherwise, and will require a global effort to address. Climate change is one of those issues.”

In addition to Terra Nostra, Lubetkin has been researching the stated risk estimates of large oil spills in the Arctic as a case study of how scientific research is contracted out, vetted and used in policy making. This work led to a larger examination of how scientific research is reviewed in environmental impact statements, where only 30 percent of research cited is from peer-reviewed journals. Lubetkin’s paper, “The tip of the iceberg: a case study review of grey literature used in environmental impact assessment,” underscores her belief that scientists need to hold their peers accountable.

During her postdoc in oceanography, Lubetkin and her colleagues often met for a working lunch, and the conversation would inevitably turn to the impact of climate change on the scientists’ work. “All of us recognized what was happening and were frustrated. It was just scientists talking to scientists, which is the choir preaching to the choir. I realized we needed to deliver the message beyond the choir.”

Terra Nostra is one scientist’s effort to do so.

“Music is incredibly powerful at expressing huge social concerns,” says Lubetkin. “We get to explore these big, deep, emotional subjects through music, which reaches people in a way that nothing else does.”