The tiny Trypanosoma brucei parasites in Professor Danae Schulz’s biology lab at Harvey Mudd are invisible to the naked eye, but visitors to the lab are immediately aware of their presence. Signs along the west wall of the lab warn that the windows “must remain unopened.”

“It’s a safety precaution,” Schulz says, explaining that, as unlikely as the scenario might be, if a parasite made it out an open window and ended up in the bloodstream of a local cow, things wouldn’t end well for the animal.

T. brucei is an African protozoan parasite that, when transmitted to the bloodstream of a mammal through the bite of a tsetse fly, causes sleeping sickness in humans and nagana in cattle. Fortunately for Schulz and her students, humans are resistant to the particular parasites housed in the lab.

The Schulz Lab is studying how the trypanosomes are able to reprogram themselves to adapt as they move between the differing environments of the fly midgut and the mammalian bloodstream, with an eye toward trying to manipulate these adaptations to generate new therapies. Researchers in the lab divide work into two categories: Matty Walsh ’20 and Ellie Naudzius ’20 gather data at the bench, and Moira Dillon ’18 and Jingwen Liao SCR ’18 analyze data computationally. 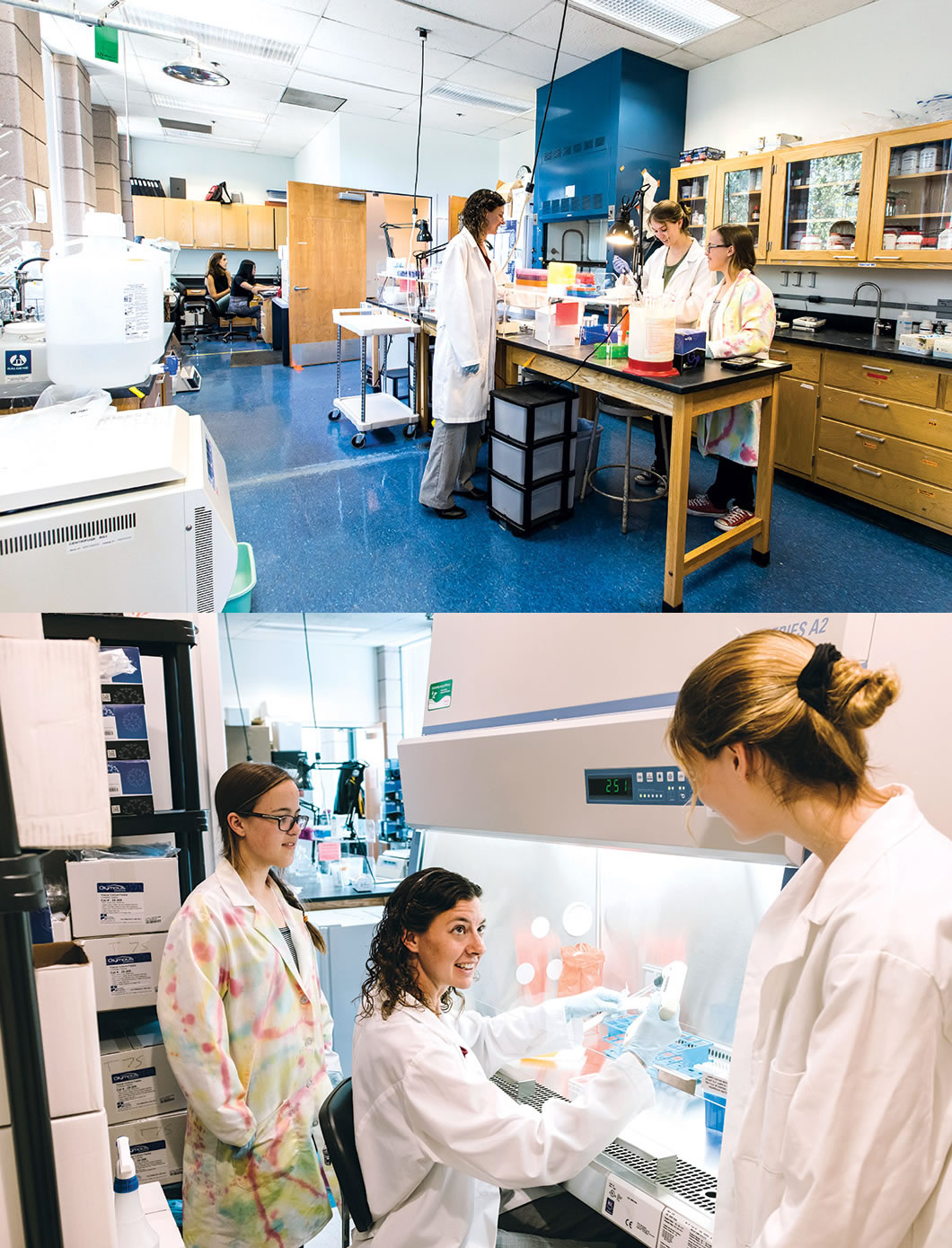 Dillon and Liao analyze gigabytes of sequenced data. They seek to understand the role for a particular type of protein as the parasite cells change from one version, which exists in the mammalian bloodstream, to another version, which lives in the insect. “They want to know where the protein sits on a chromosome and are asking that question computationally,” Schulz explains. The students are using an existing algorithm, but there is the possibility of writing a new one if they decide they need something more specialized. “We’re really lucky at Harvey Mudd that the students have a broad skillset so we can capitalize on that,” Schulz says.

Microbes are cultured in the orbital shaker, which provides the ideal environment for growing bacteria.

When working with chemicals like formaldehyde and phenol chloroform, researchers use the chemical fume hood to protect themselves from noxious fumes. Chemicals are stored in drawers below the hood and are used for various procedures, including isolating DNA.

All the non-toxic work of DNA isolation is done at the bench. DNA manipulation requires careful labeling of all the tubes because the researchers can’t actually see what they’re doing; they only know if they’ve done it correctly after a few hours when the DNA construct is measured on the spectrophotometer. Schulz (left) oversees the work of Walsh and Naudzius as they build a DNA construct that will act as a reporter when cells are tested to determine which type they are (the blood version or the insect version). When the students add the DNA construct into a cell, the cell may change color, depending on which version it is: one that exists in blood or one that exists in the insect. The researchers seek to learn whether the protein moves from one place on a chromosome to another as the cells become insect stage cells. Other equipment on the bench includes a centrifuge, PCR machine and waystations for measuring chemicals.

Used pipettes go into this decontamination bucket to soak in chlorine. Everything that touches the parasites must be thoroughly decontaminated via an autoclave in another lab.

Everything needed to prepare parasite food, including tools like a vortexer for mixing components together, is found in this section of the lab. Drawers hold supplies such as unused pipettes and PCR (polymerase chain reaction) tubes. PCR is a technique used to amplify a segment of DNA across several orders of magnitude to generate copies of a particular DNA sequence.

A small room at the back of the lab houses the tissue culture hood, a biological safety cabinet that prevents cross contamination. Schulz feeds the T. brucei “parasite food” by pipetting it into a dish where she’ll grow parasites. The food is made up of components from cow blood combined with sugars and amino acids. The parasites must be fed every two days.