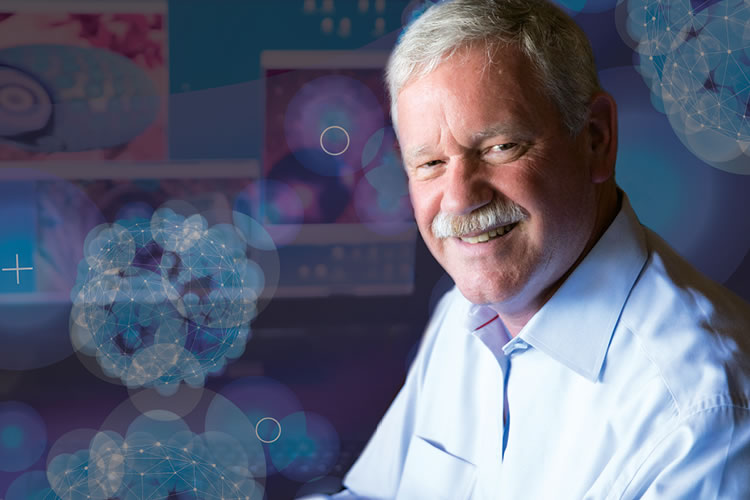 Imagine doctors sending billions of microscale robots into the human body to survey and map the entire vascular system, identifying any lesions or cancers along the way. Using this information, other nanorobots target and repair specific cells, one by one, while causing no side effects or harm to neighboring cells. These nanorobots enter the body via an injection or swallowed pill, complete their mission, and exit.

“Conceptually, nanorobots are the ultimate ‘big hammer’ in the 21st century medical toolkit, and medicine may be the single most important application of nanotechnology,” says Robert Freitas ’74, a senior research fellow at the Institute for Molecular Manufacturing and Harvey Mudd physics graduate. “Nanomedicine not only could vastly improve human comfort, safety and pleasure, but also dramatically extend the human lifespan and greatly expand the possibilities of the human form.”

Though this may seem like science fiction, it is what Freitas has been seeking for years to make a reality. He first set out a vision for nanorobots and their conceptual design in the 1999 book Nanomedicine and explains, “Mature nanomedicine requires the ability to build medical nanorobots, using nanofactories. That’s why I’ve spent the last decade pursuing molecular manufacturing technologies.”

His efforts have led to 10 U.S. patents in the fields of molecular manufacturing and medical nanorobotics— including the first for diamond mechanosynthesis, a method for building a tool to fabricate atomically precise physical structures—and the 2009 Feynman Prize in nanotechnology for excellence in theory. Currently writing two new volumes in the Nanomedicine book series, Freitas has also published works about using molecular manufacturing and nanorobotics to address climate change, food production, and Alzheimer’s disease, the last of which he describes as the “Mount Everest of medical challenges that will require mature nanotechnology to surmount.”

“I’m certainly not smarter than everyone else, but I have an almost instinctual eagerness to seriously consider the impossible,” says Freitas. “The other personal characteristic that I think matters is raw persistence. In my experience, if you want something badly enough and are willing to persist for years or even decades, you can probably attain it.”

Those and related qualities, including considerable curiosity, were already in evidence by the time Freitas arrived at HMC. Coming to the College had been his goal since seventh grade, when the headmaster of his Phoenix school told the self-described “class nerd” that it would be perfect for him. Freitas ultimately reached the same conclusion, noting, “The three most important things I learned at HMC were how to lead, how to learn and the value of an excellent professor. My favorite was physics professor Thomas Helliwell, who took the time to indulge and encourage my intellectual fascination with the details of many ‘impossible’ things in physics.”

His professor also indulged his desire to write a science fiction novel in place of the traditional senior research in physics. Freitas then continued on an unconventional path, first earning a law degree and then searching for extraterrestrial intelligence at several astronomical observatories, studying self-replicating lunar factories at NASA, and publishing a financial newsletter featuring an econometric value-forecasting model before settling on nanotechnology.

“At first glance, my path appears to be a mix of overlapping unrelated activities, but in hindsight, each of the activities provided valuable experience essential to my current success,” explains Freitas. “What unites them is an abiding interest in the future, my curiosity about the unknown, my eagerness to consider some of the deepest questions confronting humankind, and my willingness to actively indulge these interests in the limited time available in a lifespan. It helps that I hold the view that this ‘limited time’ will become significantly less limited if I’m successful in my projects.”

Now, Freitas has what he considers a laser-like focus on nanomedicine. Unlike many researchers, he is looking for big leaps in science and technology, not incremental advances. And he believes his vision of manufacturing nanorobots equipped with the sensors, manipulators, onboard computers and mechanisms for communication and navigation that would enable new medical therapies is more feasible and closer to reality than ever before.

“My collaborators and I want to get to that place as fast as possible,” says Freitas. “Molecular manufacturing has far-reaching consequences for the future of society: Nanomedicine could allow humans to survive long enough to participate directly in the distant future. What could be more exciting than that?”