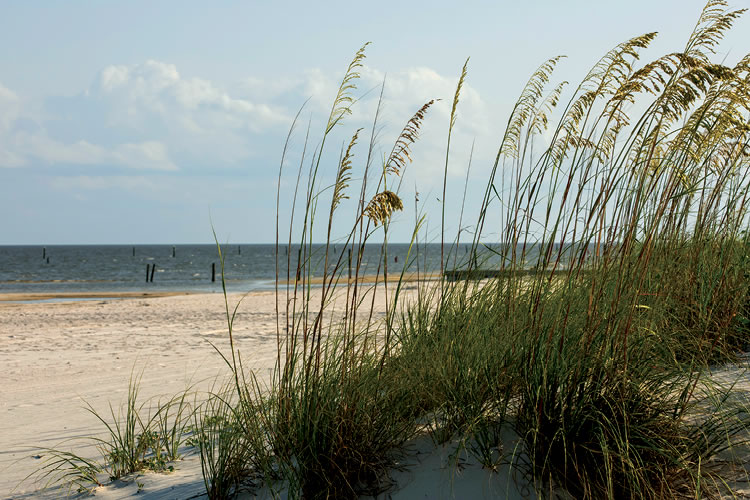 Few people other than coastal engineers like Donya Frank ’06 would realize the movement of a tiny grain of sand could affect the entire industry of seaside tourism—for beach dwellers and beachgoers alike.

The movement of those individual grains of sand adds up, and when too many of them are swept away by waves, the beach must be “nourished,” or restocked with sediment. As part of Frank’s postdoctoral research in the Sediment Dynamics Laboratory based at the U.S. Naval Research Laboratory in Mississippi, it’s her specialty to figure out where—and how quickly—the sand is going.

“When beaches are eroded, tourists won’t want to go there,” says Frank, a National Research Council Postdoctoral Fellow who studied engineering at Harvey Mudd. “No tourists means no money, and the economies of many coastal states depend heavily on the billions of dollars that tourism brings in each year. If you spent a lot of money to go on vacation in Florida, for instance, and the beach is closed for nourishment, that would be very disappointing.”

That very situation happened to her in early May, when she booked a room in Miami. “I was looking forward to playing in the waves, but when we got there, we found tractors and workers all over the beach,” she says. “Being a coastal engineer, I was intrigued to watch the activities, but anyone else would probably have been frustrated.”

The problem is particularly relevant for Frank’s home country of Jamaica, a small island in the Caribbean where tourism is big and coastal erosion is a serious concern. Her research informs more than just the tourism industry—the military, fishing industry, oil and gas, marine habitats, coastal infrastructure, meteorology, even insurance and telecommunications are all affected by sediment transport and coastal processes.

As part of her doctoral research, Frank collaborated with electrical and computer engineers to design a “smart sand grain” by embedding accelerometers into plastic spheres to get better measurements about how sediment moves. Now for her post-doc, Frank tracks individual grains of sand using high-speed cameras and a powerful green laser in a small-oscillatory flow tunnel. Her experiments use fluorescent hollow glass microspheres, about 10 micrometers in diameter, that behave like fluid particles. They re-emit light at a higher wavelength than the laser light, so two cameras with optical filters can differentiate the movement of the microspheres from the sand grains. A third camera tracks the sand grains. The measurements provide information about how fluid and sand movement are affected by waves.

These small-scale processes help scientists understand larger-scale events, such as beach erosion and sandbar migration in shipping channels and ports. There are other applications, too, such as keeping people safe. For example, unexploded military munitions have been lost on the seafloor, and they could wash ashore and explode.

Frank’s findings provide data to help the U.S. Navy manage the problem. She and the research team in the Sediment Dynamics Laboratory installed sensors in so-called “smart” munitions to track their motions during storms. In March, the team deployed three of these smart munitions off the coast of Virginia to measure their response to real storm waves. The Navy will eventually use the data to estimate the motions of real munitions in hopes of preventing injuries.

Sediment transport also affects building regulations for coastal infrastructure because sediment makeup affects how much energy waves have when they hit bridge piers and buildings. And to keep navigational pathways clear, dredging must occur every few years. By accurately predicting how much sand will migrate back into channels and ports, cities will know how often to dredge so ships don’t get stuck on sandbars. A lot of food is still imported on ships, so this could also affect the nation’s food supply.

One of the most surprising applications of coastal engineering research, in Frank’s opinion, is that of the insurance industry. After Hurricane Katrina devastated New Orleans and much of Mississippi, about 90,000 square miles along the Gulf Coast—including more than 300 miles inland—were declared federal disaster areas. Insurance companies were scrambling to assess the damage and plan future policies.

“Insurance agents had to get a better understanding of the impact of natural disasters and coastal erosion on insurance policies,” Frank says. “Now they’re using data from coastal engineering research, particularly from storm surge and inundation modeling, in their risk analyses to determine insurance premium pricing. It’s an unexpected use for these data.”

Frank plans to finish her post-doc this November then she’ll continue her research while working with graduate students, potentially as a professor at a research university or at a research laboratory. As much as she loves her current research, Frank is considering moving to larger-scale projects that have a more direct and visible human impact.

Frank says she feels prepared for wherever the future takes her. She credits the interdisciplinary nature of Harvey Mudd’s engineering program, which encouraged undergraduate research very early in her career and also gave her experience with electronics, project management, global environmental policy and lots and lots of math.

“Many other engineering programs don’t require as much math, but I didn’t fully appreciate that until later in graduate school,” Frank says with a laugh. “Harvey Mudd is rigorous. Almost any challenge after that is manageable.”