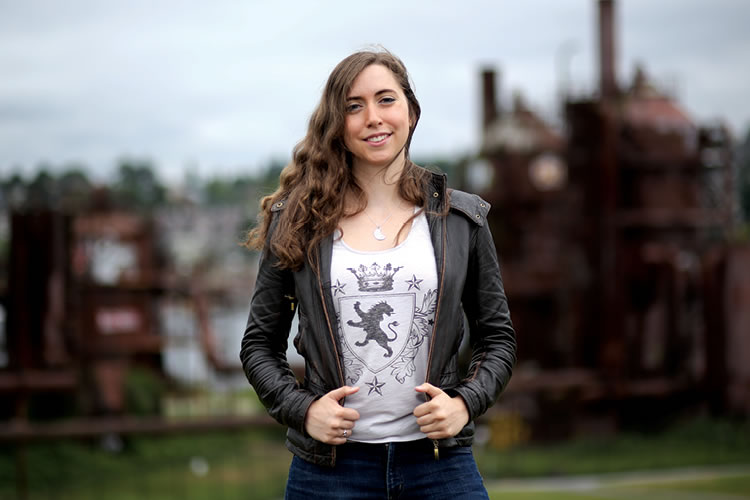 Luna, the protagonist of the video game that Renee Gittins ’12 is developing at Stumbling Cat, the Seattle-based indie game studio she founded two years ago, is spunky and awkward, a preteen witch trying to find her place in the world. She bears a not-coincidental resemblance to Gittins’ younger self.

“She’s relearning what respect is,” Gittins says. “Redefining it. She realizes that not everything is as it appears, that respect is earned, not granted. The antagonist of the game is Prince Charming, who throws around the weight of his royal upbringing but has no substance behind it.”

Potions: A Curious Tale follows Luna as she employs tricks, charms and ingenuity to solve puzzles and work her way toward master potion brewing. Gittins, a passionate gamer from an early age, had long been frustrated with the way games tended to encourage combat even when it was detrimental, so she wanted to create a game that rewarded its players for picking their fights carefully and finding alternative ways to interact.

Gittins’s love for video games is rooted in memories of sitting beside her father, watching him play. It’s also an extension of her love of logic and solving puzzles. She majored in engineering at Harvey Mudd, but a few years after graduation she found her way—via working on concussion management software at her biotech job and studying programming in her spare time—to the game industry. “What Harvey Mudd does really well is it encourages self-teaching. Clinic in particular. It’s an invaluable tool, especially in the tech industry. I’m always learning.”

She felt respected at Mudd, where no one questioned her skillset, so the rush of assumptions and generalizations she met with when she entered the game industry was disconcerting. She is responsible for all of the programming, design, business development and management for Potions: A Curious Tale, but often people assume she’s an artist, not the CEO of a game studio. Gittins attributes this squarely to her gender. “I was talking to someone at a party about Stumbling Cat, and after I introduced myself and every member of my 10-member team, the person I was talking to said, ‘So who does the programming?’”

Only 23 percent of professionals in the game industry identify as female. Gittins thinks there are many reasons for this. “Video games have often been considered a male pastime,” she says, “and gaming, especially online gaming, has had difficulties with sexism and harassment. Studio cultures can also be unwelcoming to new and diverse hires, resulting in many women leaving the industry within a year or two of entering it.”

But Gittins is intrepid about sharing her passion for gaming with other women and girls. As a board member of the International Game Developers Association, she plans events to support local developers and mentors students in programming and game development. One of IGDA’s current initiatives is to double the number of women in the game industry. Sometimes her presence alone plants these seeds. At the 2015 GeekGirlCon in Seattle, a gathering that “celebrates the female geek,” she set up a booth among the tabletop and card games, “without another video game in sight,” and girls streamed to her table. She saw how they identified with Luna and how excited they were to learn that she had created the game herself.

Potions is a year out from its debut, and Gittins already has plans for a virtual reality game. “I hope that my presence within the development community helps empower other women and girls,” she says.