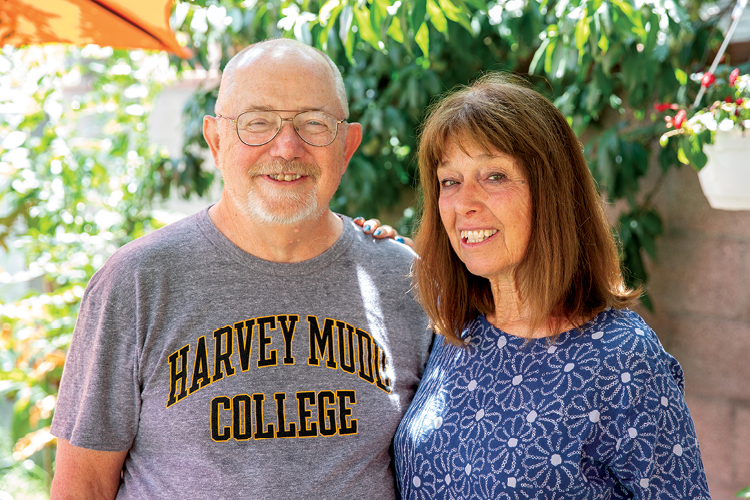 Dave Wilbur graduated from Harvey Mudd College in 1968 with a bachelor’s degree in math. Following two master’s degrees, his first career was in environmental engineering, which led to engineering management positions and then aeronautical engineering management. As a manager with AeroVironment, a pioneering aeronautics company and leading manufacturer of unmanned aircraft systems, Dave and his team helped improve military intelligence, agriculture, energy systems and the electric vehicle industry.

Today, he and his wife, Linda, are working on a very different kind of challenge: transforming the lives of families in underserved communities through their nonprofit, the LinDave Institute.

It all began at East Los Angeles College (ELAC), where Linda taught early childhood development. She and her colleagues asked: Why were so few Latino women moving into leadership roles in academia? They were successfully earning their associate degrees but not moving beyond that. Was it something within the culture or within academia itself?

In addition to economic hurdles, they found that much of the problem appeared to be self-image. The students simply couldn’t see themselves in leadership roles.

“So we began a project,” says Linda, one that would build self-esteem and leadership skills. That’s when Dave, inspired by an economic management theorist, got involved.

Dave had learned about W. Edwards Deming and his management theory from management studies he undertook while at AeroVironment, where he put Deming’s theory into practice as an engineering and project manager. The Deming philosophy incorporates systems thinking and encourages individual responsibility, teamwork and collaboration. Dave calls it “the scientific method and the Golden Rule applied to systems management. As you learn to trust the team, you learn to trust yourself.” Dave and Linda wondered if the same techniques that motivated engineers in the workplace would work equally well for college students in child development. So, Linda started using these self-esteem-building principles in her ELAC intern leadership program.

“I’d give them a project, I’d structure it, but I wouldn’t do it,” says Linda. This placed the responsibility—and the credit, once the goals were accomplished—entirely on the students, who were accustomed to doing as they were told. They were free to think for themselves and to rely on each other to reach their goals, skills they’d have to master to become leaders.

As part of the project, Linda’s best child development students were invited to conduct leadership workshops at ELAC. From there, they added new projects in the community. “We began a project of reading one-on-one to small children,” says Linda. “Then we grew into working with young adults with autism.”

In 2013, the Wilburs formalized their efforts as the LinDave Institute. Since then, they’ve been busy finding new ways to support underserved communities in East Los Angeles, like conducting a free camp for girls that builds self-esteem and sponsoring ongoing art and science workshops for children in Boyle Heights. They organize and prepare volunteers who read to preschoolers at ELAC’s Child Development Center, local Head Start programs and preschools, and who mentor young adults with cognitive delays. Volunteers and interns run free, bilingual parenting classes, tutor kids and train teachers, allowing Linda to continue to teach child development to the caregivers. Their project also facilitates art and science activities for Cloud 9, a community program for homeless families.

If the Wilburs’ goal is to improve the self-image of the students and encourage them to give back, then the best measure of their success is the work that their interns have gone on to do.

“Three have finished their master’s and two have received first-year assignments as adjunct professors in the community college. Another is working on her master’s in public advocacy, and several have moved on toward their B.A. after getting their A.A. from ELAC,” says Dave with pride.

These students are from Boyle Heights and Highland Park where less than 15% graduate from high school and less than 5% complete college. Dave also notes that some of the program’s early participants are immigrants with DACA (Deferred Action for Childhood Arrivals) status and have entered careers that benefit their East Los Angeles community. “They’re moving into not just leadership roles, but educational leadership roles,” adds Linda.

Now in their 70s, Dave and Linda have transitioned out of paid, full-time work, but are still active and engaged with their institute, “refocusing” as the Wilburs like to think of it.

“I started out in math and computer science. I morphed into environmental engineering. I morphed again into managing engineers at an aerospace company, and now I’ve morphed into being education-oriented with this nonprofit,” says Dave. “After I morphed into child development, I realized that managing toddlers was not much different than managing engineers—both wanted something interesting to play with all day. I think Harvey Mudd prepared me for a variety of things.

“I advise young people that there’s an excellent chance that you will not just change jobs but change fields,” he says. “The more well-rounded and capable you are, the happier you’ll be as you make those transitions.”