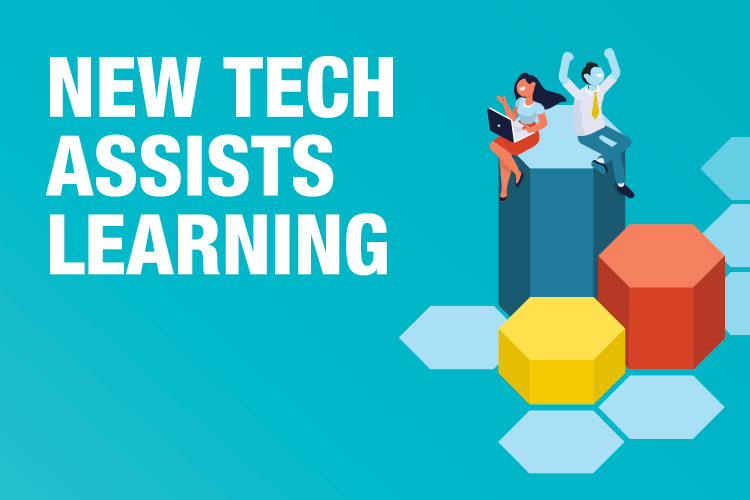 One semester in Professor Zach Dodds’ computer science lab at Harvey Mudd College was all it took to hook Veronica Rivera ’17 on doing research and finding new ways to learn. And she’s been doing both ever since. That includes designing new learning technology for children with autism, for college students and for job-seeking adults.

During her sophomore year in Dodd’s lab, Rivera and four other students teamed up on a project to create a camera-equipped robot capable of reading a three-dimensional map and navigating a space on its own. “I liked how collaborative the atmosphere felt, working on a big project with other students and doing it while we were still learning (the basic) ideas and receiving support from a great mentor, such as Professor Dodds,” she says.

After she earned her joint computer science and math degree from HMC in 2017, Rivera joined a research group that was exploring a new educational approach for children with autism. Part of the Assistive Socio-technical Solutions for Individuals with Special Needs (ASSIST) Lab at the University of California, Santa Cruz (UCSC), the group was doing the groundwork for a system that would employ facial recognition software to read a child’s emotional state and then respond in a way that inspired further learning, she explains. “For example, if a child was working on an educational iPod game, the idea was for the technology to detect that he was sad or frustrated. The technology would then respond by prompting the child or repeating information, or by telling the child to take a step back and do some other small activities to get him back on track so he could then complete the educational activity.”

Rivera contributed to the ASSIST lab for nearly a year with much of her time spent interviewing teachers, school psychologists and speech language pathologists about different techniques they use to facilitate learning. That opened her eyes to the science of education and got her thinking about how educational technology could be used to reach a broad audience, which in turn, led her to UCSC Professor David Lee’s Tech4Good lab.

The Tech4Good lab specializes in social computing, or the use of computer systems to reach and connect people. In particular, Rivera was intrigued by the lab’s Causeway project. Causeway is a wide-ranging educational technology that endeavors to help college students learn marketable skills while also providing an online but real-world, hands-on experience—the kind of experience that students need in order to land their first internships or first jobs, says Rivera, who officially joined the Causeway team in January.

The Causeway platform works like this: A marketable skill, such as webpage development, is broken down into a series of online tasks that students learn and complete one by one. The tasks are designed to be simple at first and increase in complexity, so as a student completes one they move on to a new and more advanced task, ultimately learning the skill from start to finish, explains Rivera, who has not only been helping to design a trial of the platform, which is set for this fall, but is also now devoting her doctoral-dissertation research to this project.

For the upcoming trial of Causeway, students will be going through a stepped series of tasks, each approximately two hours in duration, and, once they complete all the tasks, they will have built a webpage. As Causeway gets up and running, the research group will be partnering with community nonprofit organizations, so that the work the participating students complete—for instance, the webpage they develop—will be something the organization actually needs. As a result, students who go through the Causeway platform will not only be able to add the newly acquired skill to their resumes but will also have the opportunity to beef up the experience section of their resumes with this real-world contribution to a nonprofit organization.

As Rivera and other members of the UCSC Tech4Good Lab continue building out the Causeway platform for college students, they are working toward expanding it to include skills well beyond web development and are also looking into opening the platform to the larger audience of job-seekers who would like to gain skills and experience to help them land new jobs or promotions, she says. In addition, the research group hopes to add a mentorship component to the platform. “We are designing it so that as you progress through different tasks, you also gain more responsibility over the project and move up a hierarchy,” she says. “The idea there is for people who are higher in the hierarchy to serve as mentors for the people who are just starting out. We’re examining a variety of mentorship structures by designing different types of chat interfaces into the platform.” The group is also exploring the option of pairing students who are at the same level, so they can essentially mentor and support one another.

While all this work is progressing, Rivera is thinking about adding yet another layer to her research by studying career mobility among workers in online labor markets. This includes markets such as Amazon Mechanical Turk, in which workers go to websites and sign up to do simple, repetitive and usually very low-paid computer tasks that require little thought, like identifying and labeling objects in photos. Consequently, these workers “don’t necessarily get to build new skills like we get to do in more traditional jobs that constantly challenge us and require us to think deeply,” she says. “I’m looking to see what these workers’ career goals are, and how we can support them in learning new skills and in their careers, possibly through Causeway or something related to Causeway.”

As for that sophomore semester in Professor Dodd’s lab at HMC, she says, “I’m very glad I did research with him that summer, because it really propelled me forward. I liked thinking about different questions and trying to solve challenging problems. I liked writing up the work, getting the research out there, talking about it, hearing other people’s ideas, and being part of a bigger discussion.” She adds, “And now with my PhD, I’m continuing to do those things, while also thinking about how educational technology research can really affect people’s everyday lives and have a significant social impact.”