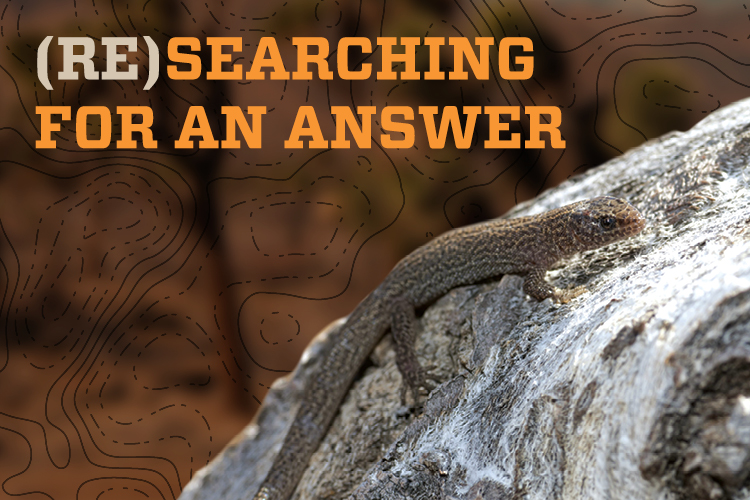 This summer, Stephen Adolph and his students sought to answer a question: How will the desert night lizard Xantusia vigilis respond in space and time to predicted climate change in California?

Xantusia vigilis are Southern California natives found mainly in the Mojave Desert, often beneath Joshua tree logs. Measuring (up to 2.75 inches) long, their granular scales are rather drab (olive, gray or brown) except for a distinctive narrow beige stripe edged in black extending from eye to shoulder.

Adolph’s interest in Xantusia vigilis relates to his longtime fascination with ecology and lizards. The Stuart Mudd Professor of Biology has multiple published articles regarding temperature and its effects on lizard reproduction, growth and survival that have implications for how climate change may affect animal populations. With the help of his team, Adolph was able to further his understanding of how animals respond to thermal environmental change.

Students spent the summer researching and creating predictive models of this lizard’s geographical distribution with the help of GIS and other spatial statistical methods. With existing datasets, the team was able to look at what new predictions could be made for this species. “We are relying on datasets that researchers have collected for decades, centuries even, on this species,” Adolph says. HMC researchers have access to over 6,000 records on the Xantusia vigilis, and the team used all applicable datasets to further the accuracy of their prediction models.

Their goal was to learn more about Xantusia vigilis’ natural population dynamics and determine what the distribution of the lizards may be in the future based on the temperature and rainfall characteristics of certain deserts. 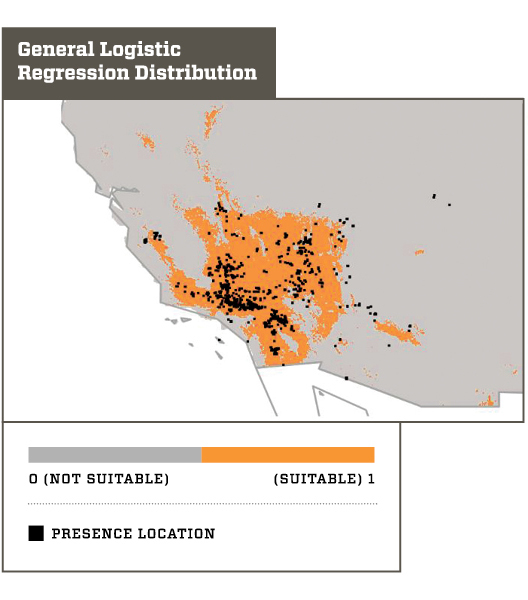 To answer this question, Kyra Clark ’22, Sarah Halvorsen ’21 and Daniel Furman ’20 (University of Pennsylvania) worked 40 hours a week on multiple datasets along with reading and research in order to accurately predict population dynamics. They manipulated the format of each dataset to ensure uniformity—i.e., all dates are recorded as month-day- year—before they were able to move forward with their work. When dealing with the climate datasets, the students considered that not all cities have weather stations to record data, so the sets are just estimates.

The students created multiple predictive models in order to determine which model produces the most accurate results, and they learned that each set is different. Some models are more lenient than others and produce different answers, because one may predict a larger geographical range for the species than another.

The team found the relationship between Xantusia vigilis and precipitation to be intriguing the more they learned.

“Going into this project, primary literature by Zweifel and Lowe showed that the lizard’s birth rate was strongly and positively correlated with rainfall,” says Sarah Halvorsen. “However, as we’ve been developing our niche models, we have found that Xantusia’s presence is correlated with low rainfall. It has been interesting to discover so many ways to look at just one environmental variable, especially since California might become more prone to drought in the future.”