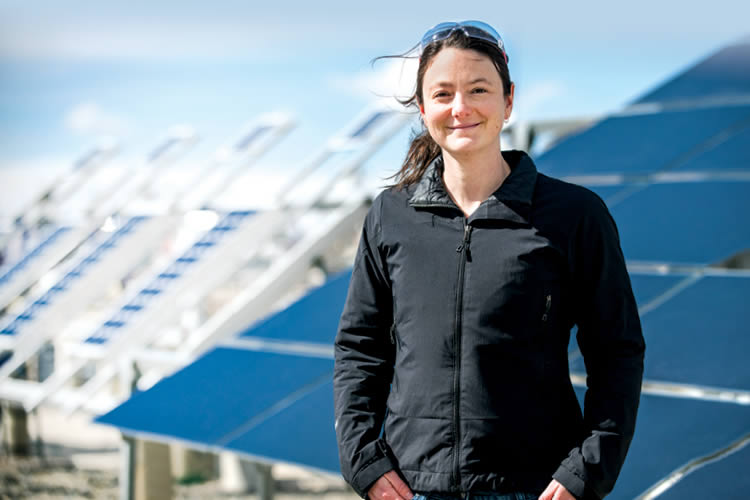 Look around many neighborhoods, especially in California, and it can seem as if solar panels are popping up on nearly every rooftop. However, in reality photovoltaic (PV) cells that convert sunlight directly into power for residences, commercial properties and utility-scale solar fields generate just one percent of all electricity in the United States. And that’s after rapid year-to-year growth over the past decade, including a record number of PV solar installations in 2016. To reduce the use of fossil fuels and the impacts of climate change, says Adele Tamboli ’04, the technology will need to become far more prevalent.

Tamboli, a scientist at the National Renewable Energy Laboratory (NREL) and research assistant professor at the Colorado School of Mines, is working to make that expansion feasible. She’s focused on improving the efficiency of PV cells through materials science, the field in which she earned a PhD from the University of California, Santa Barbara.

Lowering costs and boosting performance are essential to advancing PV technology. Tamboli explains, “Ninety percent of the market right now is in crystalline silicon, the same material used in computers. It’s not a good light absorber, and making it at a high-enough quality requires expensive high-temperature processing and complicated equipment. For me, the big issue is that the silicon photovoltaic market has high capital expenditures. To address climate change, we have to come up with a technology that can be scaled more quickly.”

In response to these needs, Tamboli is exploring how to get more power out of the existing silicon technology. Her effort to improve silicon’s performance involves layering two different solar cells—one high voltage, the other lower—to find better ways to efficiently capture light.

She is also looking for new semiconductor materials with the potential to replace silicon entirely. This research into inexpensive silicon alternatives with greater light absorbency is already proving fruitful: Tamboli has identified multiple new materials that show promise for solar applications and perhaps others as well, including lasers and optical computing.

“The key question is whether we have found an under-explored set of semiconductors that is tunable in new ways that we haven’t traditionally used,” says Tamboli. “One really interesting thing is that two of these materials, zinc silicon phosphide (ZnSiP2) and zinc germanium phosphide (ZnGeP2), can be grown on silicon, so they potentially could be integrated with silicon PV in a multi-junction solar cell architecture. We could then control the degree of disorder to get exactly the properties we want.”

This investigation into promising new materials has attracted attention well beyond her lab. In 2016, Tamboli became part of a select group of scientists to be awarded significant support from the Department of Energy’s Early Career Research Program. Her project is one of just 49 chosen from among 720 research proposals to receive five years of funding.

It’s unsurprising that Tamboli is making her mark at a relatively early stage of her career. The Harvey Mudd physics graduate also came to the field of research early, starting at the Los Alamos National Laboratory the summer after her first year of college.

I always wanted to do science that has an impact on the world. That’s why getting into renewable energy was a good fit for me. I decided it was a problem that needed to be solved.”

“It’s somewhat unusual to get research experience so early in college, but I got lucky and was offered a job. I had some programming experience, and they liked that. I was debating about being a computer science major at that point—I had a hard time figuring out a major at Mudd because I liked everything—but I decided sitting in front of a computer all day wasn’t for me,” Tamboli recalls. “I enjoyed the days I could go into the lab and see my code being used. That’s what got me interested in experimental research.”

Back on campus, Tamboli became an undergraduate researcher working on magnetic materials with physics professors James Eckert and Patricia Sparks. They encouraged her to attend research conferences and to interact with other scientists, and they stimulated her interest in materials science.

“I always wanted to do science that has an impact on the world. That’s why getting into renewable energy was a good fit for me. I decided it was a problem that needed to be solved,” says Tamboli, who began directing her attention to renewable energy after graduate school. “I did a postdoc working on materials for artificial photosynthesis, which taught me a lot about the same materials I work on now.”

As she tackles her current projects, Tamboli is buoyed by the potential she sees for renewable energy and for solar power in particular. “I think high-efficiency solar architectures will take over,” she says. “I also think we’ll see more distributed solar because the ability to have PV everywhere will give us more options other than individual, residential rooftop applications. Another thing is the expansion of PV in the developing world. We don’t need new technology for that—we just need to put it out there. It’s starting to happen.”

For now, Tamboli is focused on further breakthroughs and innovations in her ongoing projects, working with a research team that has included Mudd undergraduates and alumni. She says, “Science is uncertain and risky. But I try to choose things with the most impact and highest likelihood of success. And even if my particular project doesn’t succeed, the person sitting two doors down from me who’s working toward the same goal might.”