A  lot has changed since the days when physicists made their calculations by hand on giant chalkboards. As a joint postdoctoral fellow at Caltech and Carnegie Observatories in Pasadena, California, physicist Andrew Wetzel ’05 recently helped solve a decades-old mystery of astrophysics using computer simulations written mostly on his laptop.

“We’re going to a different level of theoretical modeling to try to understand the very complex processes that govern how galaxies form,” Wetzel says. “We’re now taking a different approach of using large-scale computer simulations to model those processes.”

The “missing satellites” problem developed when scientists were unable to reconcile their predictions of dwarf galaxies with the ones they could actually observe by looking around the Milky Way. “Previous models predicted there should be thousands of dwarf galaxies,” says Wetzel. “In reality, we currently only observe around 40.” That meant that either there was a problem with the modelling or there was something else going on related to dark matter that the researchers would have to figure out.

Using the basic laws of physics—what’s already known about gravity, matter, particle interaction and so on—Wetzel and his collaborators built a program that starts with the conditions of the universe just after the Big Bang and evolves it forward using these physics across 14 billion years. Once the code is written, the simulations are run on national supercomputers (supported by NASA and the NSF) in places like Texas or Silicon Valley. The supercomputers comprise thousands of individual computers connected to each other and running in unison to power the simulations. Even with that much computational power, the simulations can take anywhere from a month to a year to complete.

Wetzel and his colleagues knew that something must have been overlooked in previous calculations, resulting in the prediction of too many dwarf galaxies. “We suspected that the effects of stellar evolution, especially explosive supernova events, might be important in regulating the number of luminous satellite dwarf galaxies,” he says. Supernovae, the explosion of dying stars within the dwarf galaxies, hadn’t been taken into account in earlier calculations. The new simulations show that when stars within the dwarf galaxies exploded, they gave off so much energy that the galaxies self-destructed. “Many that fell into and orbited the Milky Way orbit were torn apart,” Wetzel explains. “We worked on better theoretical models for these processes, including pushing our simulations to even higher resolution so we could resolve the relevant physical scales accordingly. When we then ran the simulations with these updated models, the number of dwarf galaxies that emerged was consistent with what observers measure around the Milky Way.”

With a few months left before he leaves Pasadena to take on a new position as professor of physics at University of California, Davis, Wetzel continues to work on even more sophisticated and more detailed simulations, modeling the “stellar halo,” the diffuse cloud of stars visible around the Milky Way, to look at dwarf galaxies “so faint that we do not yet have a complete observational census of how many exist around the Milky Way” he says. “With this next simulation, we can start to predict how many there should be for observers to find.” 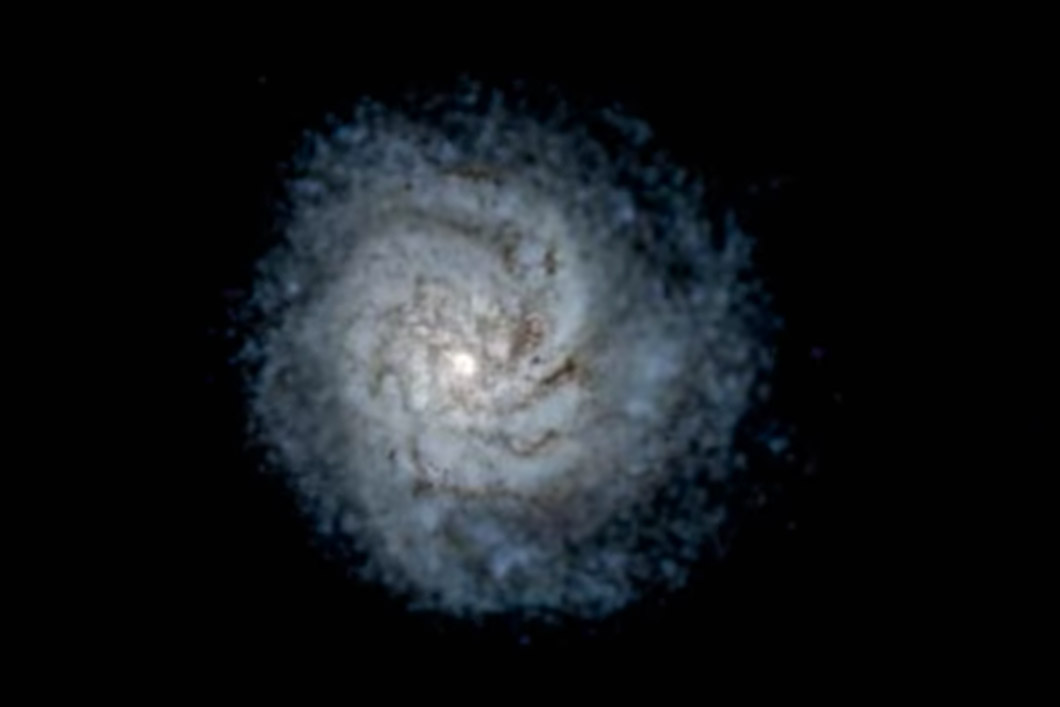 Wetzel’s simulated Milky Way galaxy images look strikingly realistic compared to satellite photographs of the real thing. Loading one of his models on his laptop, Wetzel explains, “This simulation begins pretty soon after the birth of the universe, almost 14 billion years ago.” Unfolding on the screen is a mesmerizing cosmic dance: Against the dark background of space, pockets of matter are seen growing in size, merging with each other and pulling apart. At first the images splash together like drops of water colliding in midair. Slowly, the Milky Way galaxy begins to take shape, spinning clockwise and growing in size as more matter collides into it. The galaxy continues to spin and change—clusters of young stars glow an opalescent blue, clouds of dust appear rusty red—until the simulation arrives at the present day.