Roaming robots have a new lair at Harvey Mudd. The Parsons Engineering Building basement houses the Lab for Autonomous and Intelligent Robotics (LAIR), which provides students with valuable research and experiential learning opportunities. But unlike other labs on campus, at the heart of the LAIR sits a large water tank, used as robot training space.

Directed by Professor of Engineering Christopher Clark, work at the LAIR focuses on multi-robot systems and their applications in the field. A $100,000 grant from the Hearst Foundation, combined with $26,000 from a previous National Science Foundation grant and about $10,000 in institutional funds, paid for the tank, a vision-based positioning system, associated computer technology, an observation platform and workspace.

Projects at the LAIR have included developing motion-planning algorithms that enable multiple autonomous underwater vehicles (AUVs) to model and track shark aggregations as well as developing a sonar-equipped remotely operated vehicle (ROV) to explore and map ancient cisterns and to collect video footage and sonar range measurements. In collaboration with faculty and students from Cal Poly San Luis Obispo and the University of Malta, Clark and his students develop underwater robots for use in mapping coastal shipwrecks and new technology for marine archaeology. Cal Poly’s 2017 International Computer Engineering Experience (ICEX) team (including Clark, Jeff Rutledge ’19 and Jane Wu ’18) will be in Malta this summer, deploying AUV systems for intelligent search, mapping and visualization of historic shipwrecks in the Mediterranean Sea. 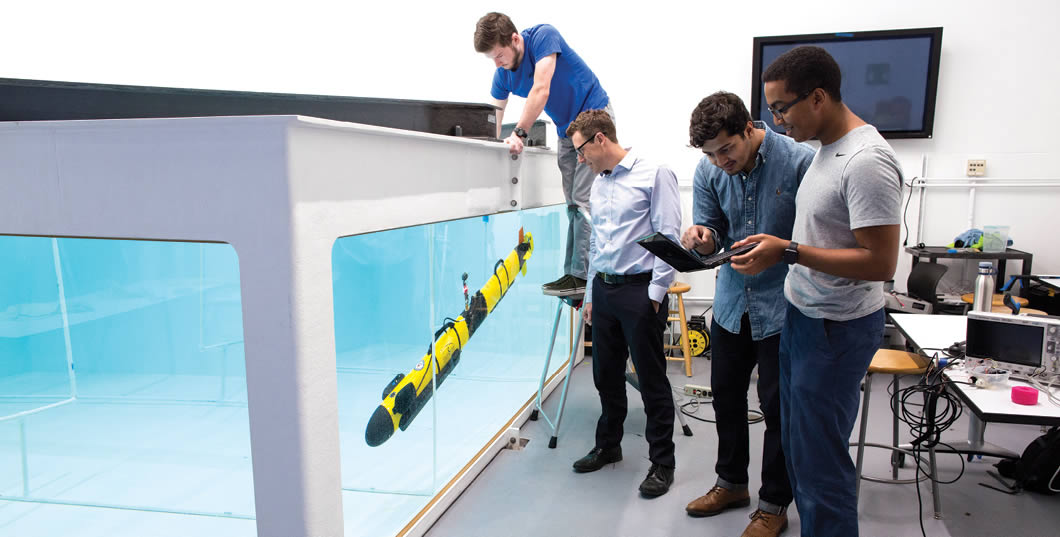 The LAIR tank holds 5,400 gallons of filtered, chlorinated water. Built-in plumbing allows for draining and filling the tank if necessary, but the tank’s filtration system works well to keep the water clean and clear. Visible inside the tank is a robot obstacle course that students in the E80 Experimental Engineering class built for testing AUV navigation. Though the tank looks inviting, legal restrictions permit only swimming robots.

AUVs like this one are used for a variety of things, like tracking the migration patterns of leopard sharks and mapping underwater archaeological features. This AUV is equipped with a temperature sensor, Doppler velocity log (DVL) to measure speed with respect to the seafloor, pressure gauge, compass, GPS, acoustic modem and sonar. Powered by lithium ion batteries with a life of about 24 hours, the AUV uses the DVL and compass to determine where it is when it’s under water (and unable to receive GPS signals), an essential function when the vehicle has no human operator and is driving itself autonomously.

Jeff Rutledge ’19 spent the last two summers analyzing water quality data and programming basic numerical models for the United States Geological Service. More recently, he’s been working with other students to develop the AUV’s algorithms for detection of shipwrecks within sonar data. He’ll continue his research in Malta this summer.

Vai Viswanathan ’17 and Eyassu Shimelis ’18 log in to the AUV through a laptop, which displays data and allows them to test sonar and perform preliminary testing and sensor calibration. Viswanathan conducted research in Malta as part of the 2016 ICEX team, along with Jessica Lupanow ’18 and Zayra Lobo ’18. Shimelis is part of the AUV shark tracking group that deploys cooperative teams of AUVs at Catalina Island.

This flat screen monitor is not a TV for the robots to watch while they lounge in the pool. It is used primarily during lab tours to show visiting groups of prospective students or elementary school kids examples of LAIR projects in the field. Part of Clark’s work as a Flex Fulbright Scholar is to engage with Harvey Mudd and the surrounding community by giving talks, acting as a mentor and participating in conferences and seminars.

Students in the E79 Introduction to Engineering class work in pairs to build sensor packages for ROVs, which they eventually test in the Bernard Field Station lake at the end of the semester. Students use this control box to send commands to ROVs through a tether. So far, 220 E79 students have built 110 ROVs.