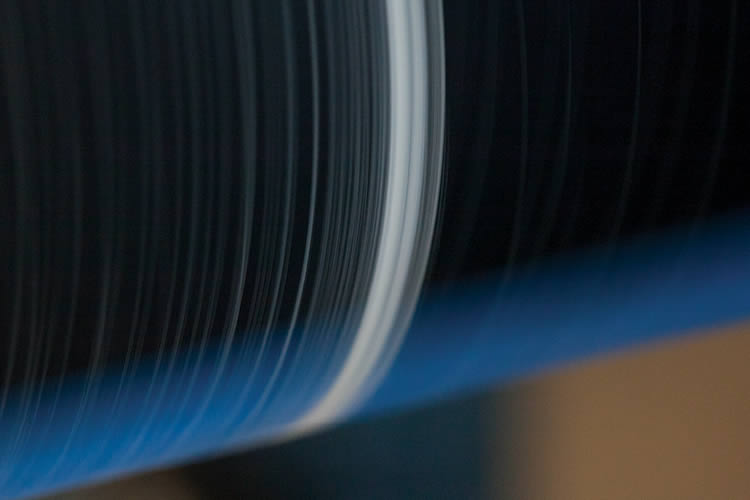 Lindsay Wray ’08 envisions a day when  everyone will wear clothing made out of spider silk. If she and fellow Mudd alumnus Loren Perelman ’02 have their way, that day is coming soon.

Wray is lead scientist and Perelman is director of quality and analytics at Bolt Threads, a company that is producing large amounts of spider silk for use in fabrics. The company is not actually farming spiders at its Emeryville, California, facility. “I don’t know how many people you would find to work at such a place,” says Perelman, laughing. Rather, the company has taken the spider’s silk-producing capability, transferred it into yeast and is harvesting the yeast-produced silk.

“What we have done is inserted the gene for making silks into a variety of microbial platforms, including yeast. We then put the yeast into a fermenter, feed it sugar, nutrients and oxygen, and the yeast produces silk proteins,” says Perelman. Actually, the silk proteins are part of a fermentation soup, which he calls a “whole-cell broth.” The next step is a recovery process that extracts the proteins from the broth. The result is a fine powder of proteins.

Every time I take powdered spider silk and spin it into a fiber, it’s a beautiful thing, especially from a materials science perspective.

From there, Bolt Threads’ technology adapts some of the decades-old spinning techniques used for silkworm silk to turn the spider-silk powder into strands and then into fibers ready for weaving into cloth, says Wray. While some of the other technology was new to Wray when she joined Bolt Threads in 2014, she was quite familiar with spinning from her days as an undergraduate student researcher in Professor Elizabeth Orwin’s bioengineering lab at Harvey Mudd from 2005 to 2008. There, Wray was spinning collagen fibers for corneal tissue engineering. “When I came to this company and was spinning my first fiber, I couldn’t believe I was doing it again, but even now, every time I take powdered spider silk and spin it into a fiber, it’s a beautiful thing, especially from a materials science perspective,” she says.

Another aspect of Bolt Threads’ approach is its ability to tweak the spider silk to incorporate different characteristics beyond its naturally amazing strength. “Spider silk is stronger than steel of the same dimensionality, so we start with that, but then we can also make it slightly stretchy, more stretchy, tighter, softer or basically anything we can imagine,” Perelman says. This potential to alter the silk was what initially attracted him to Bolt Threads in 2014. He recalls, “As a materials scientist, I was very interested in the idea that you could tune materials—manipulate them on a molecular scale— and make them do whatever you want. It was kind of a dream come true for me.”

The company can add new properties to the silk because it has genetic-level control over it, Wray explains. “We make silk from the gene up, so we can go in and alter the genetic information or the DNA. By changing the DNA, we can dial in what kinds of amino acids we want (amino acids are the building blocks of proteins), and it’s the amino acids that have specific functionality, such as strong or sticky or stretchy,” she says.

The same type of thing happens in nature, Perelman notes. Spiders are able to make silk with different characteristics, such as the strong silk in the draglines they use to drop from a web, and the adhesive silks that help them capture prey. At Bolt Threads, the goal is to combine synthetic biology, traditional chemical engineering, fermentation and its spinning technology to influence the final mechanical properties as well as the ultimate appearance and feel of a textile or a garment. The company has already made hundreds of different silks with more in the works.

This kind of multidisciplinary approach is a key part of Bolt Threads, according to Wray. “In order to meet my objectives as lead scientist, I find myself collaborating with molecular biologists, engineers and chemists all along our material pipeline, so I get to work with many different minds,” she says.

“And actually, that’s one of the things I liked about Harvey Mudd. I did my own work, but I also got exposed to all the cool things that other people were doing.”

Perelman agrees. “I would marry Mudd’s mission with what we do here at Bolt Threads. Each provides a really unique opportunity to be exposed to a very wide variety of sciences, and that’s where the world is moving when it comes to new technologies.”

In addition, he says the College highlighted problem-solving, a skill that has served him well in his career. As an example, he pointed to a lab exercise in an analytical chemical class. “We worked in teams to develop an analytical method to study different aspects of a fish tank, such as nutrients or ions, and then we all rotated through each other’s methods. I thought that was so cool, because we didn’t learn by just reading a book, but instead we actually had to figure out how to do this thing.” He contends, “I’ve found that’s an awful lot like what day-to-day life is like in the lab: You want to know more about this certain thing, and then you have to go figure out how to know more about that thing.”

Wray adds, “Harvey Mudd instills a creativity component—they teach you to think outside the box, to question the status quo, and it really comes down to how to do good problem solving.”

“I just feel that Harvey Mudd instilled in me great fundamentals that I have expanded throughout my graduate work and now—especially— here at Bolt Threads.” In fact, she says, she is seeing those same fundamentals in new hire Nicole Subler ’16, who joined the company almost immediately after graduating from Harvey Mudd.

As the work continues at Bolt Threads, Wray and Perelman are looking forward to the release of spider-silk products, including textiles from the company as well as a line of spider-silk garments resulting from a newly announced partnership with Patagonia. “I can picture everyone wearing clothes made of spider silk,” says Wray. “This is a very real possibility, and I’m excited to be a part of it.”