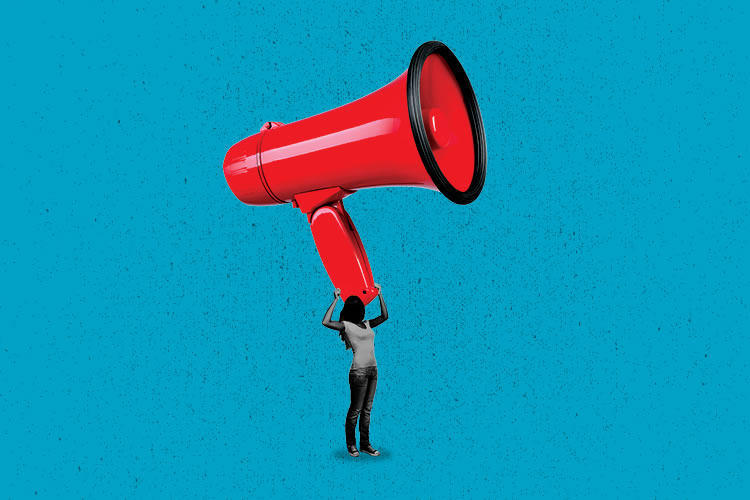 LOOKING TO BECOME A MORE informed citizen, take meaningful action and start influencing the country you live in? Malous Kossarian ’12 would like to help. In November 2016, while en route to her job at A.I. platform IBM Watson, she scrolled through her social feeds and saw how many people in her network wanted to get politically engaged. It gave her an idea for an app.

Within a few months of the presidential election, Kossarian had quit her job, recruited two co-founders, raised seed funding from friends and family and launched Magnify Progress, an app that uses machine intelligence, high-level programming languages and data science to help its users become educated and active in the democratic process.

“I want people to know they’re not powerless,” says Kossarian. “Magnify Progress is about taking action and starting as soon as possible.”

After downloading the app, users sign in with Facebook (to give access to their social sphere of influence), input their zip code, then browse tags to add issues of interest, like climate change, healthcare and hurricane relief. Magnify Progress takes note of the interests and starts to build out the feed, automatically populating a user’s profile with all their representatives’ details and providing a one-click option to add their phone numbers to a user’s mobile contacts. 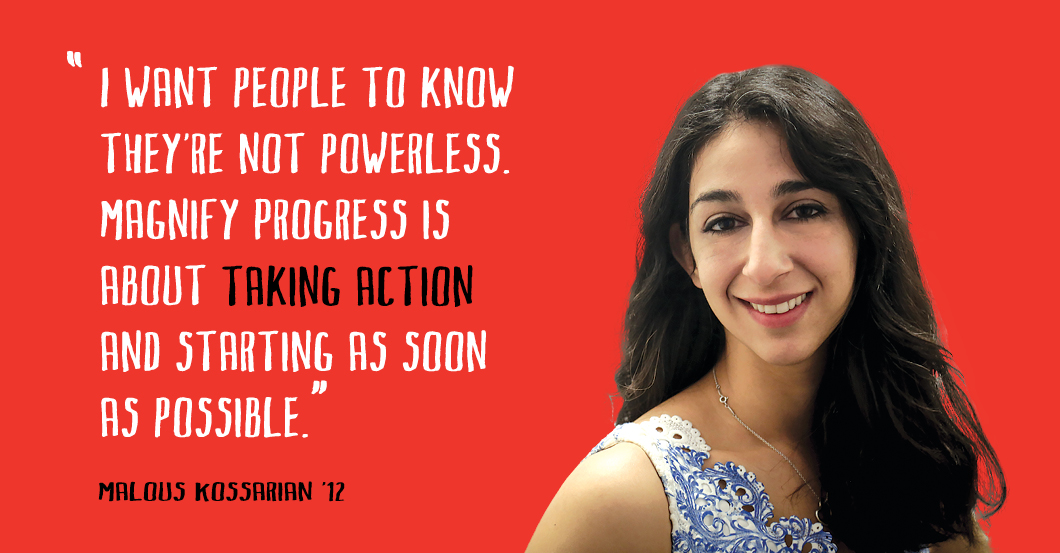 “At any moment, if you decide you’re really angry about something and want to call your representative, you can. The number is right there,” Kossarian says.

The app provides many ways to become more politically active. It’s full of useful, smart features, such as learning about your representatives’ voting patterns, unpacking the language behind complicated legislation and breaking it down into issue-based tags. It also shows which Facebook friends have already taken action on an issue. Users can post, comment and react; follow any representative, bill, cause or user. The app also encourages users to invite their friends. Through gamification users are rewarded with badges as friends take action.

The initial inspiration for Magnify Progress came from Kossarian’s time at Harvey Mudd College, where she earned a B.S. (chemistry), with distinction.

“At Harvey Mudd I felt that I’d found my people, especially because of the way everyone cared so much about what they were working on and how the school provided really good opportunities for outreach,” she says. “But, when I left for graduate school at Northwestern, I found it got a lot harder to locate volunteer efforts, especially those which didn’t require a long commitment or a specific time when I knew I’d be working. So that’s when I built my first app.”

Kossarian scoured websites to gather available data for local volunteer opportunities and began coding: her idea blossomed into a place where people could find issues they cared about, select an organization and time slot and get involved. Sadly she never got a chance to name or publish that app, but it was an invaluable experience which set the scene for the one she runs now.

The Magnify Progress team consists of Kossarian and two others, all of whom have solid developer and product lead experience. They use the latest technology: GraphQL (query language for application programming interfaces), Elasticsearch (Java-based search engine), Python (high-level programming language) and React, because they didn’t want to build native apps for each mobile platform from scratch.

“We want people to start where they are, to suggest actions that they can do right now,” she says. “For example, if they’re really concerned about climate change, Magnify Progress will suggest they start by planting a tree, stop using water bottles and cut meat out of their diet for one day a week.”

The Open Government movement requires most federal agencies and states to open up their massive databases but few are on the same platform, or even apply similar rules for understanding that data. To address this, the Magnify Progress team created scripts (to normalize data) and pledges to provide the best data at the correct time, to the right user.

“For example,” explains Kossarian, “Some of the machine intelligence we’ve brought in includes making the connections between your representative, your interests (such as climate change) and the bills they’ve sponsored (which might hurt the climate), and then we surface that information higher in your feed so you can take action.”

Spending two and a half years at IBM Watson gave Kossarian not just solid technical experience, but valuable business skills as well.

“I joined IBM when they acquired a startup I was working at. My role as the product and technical lead was to figure out how the web crawler technology we’d created could be integrated into the larger IBM Watson platform,” she says. “The A.I. platform had just won Jeopardy by ingesting the whole of Wikipedia, so, using our technology, how smart could it become by reading the whole internet? We’ve applied this to Magnify Progress. Our platform reads everything out there in the political domain and brings that right back to the user, allowing them to take action.”

Kossarian wants to embed Magnify Progress as a go-to for influential political activists, by building an admin panel that will allow them to populate Magnify Progress with actions they know will appeal to their audiences. She sees this as a way to grow the service exponentially.

For now, Kossarian is enjoying life as an (albeit bootstrapped) entrepreneur. She recently spoke at the New Founders Conference in Chicago, was on a panel about millennial engagement in politics and attended Founders University, which is backed by Jason Calacanis, the angel investor behind Uber, Tumblr and the robotic caffeine purveyor Cafe X.

“Starting from zero and ramping up within this activism domain has been very intellectually stimulating,” she says. “I’m now mixing with a very impressive set of people without the usual competitiveness because we’re all working toward this common goal of making the world a better place. It gives me such hope. Our goal is to activate a new generation of activists.”