If you think the mural that greets visitors entering the Joseph B. Platt Campus Center is just another painting, think again. It was painted by Claremont resident Milford Zornes, the master watercolorist, who, at 97, considers himself at the top of his game.

Like Zornes, the painting took a circuitous route to end up where it is today. In the early 1980s, when Zornes was helping the Los Angeles County Fair with its art exhibitions and workshops, he decided to begin a bold project: the largest single-piece watercolor painting ever undertaken. 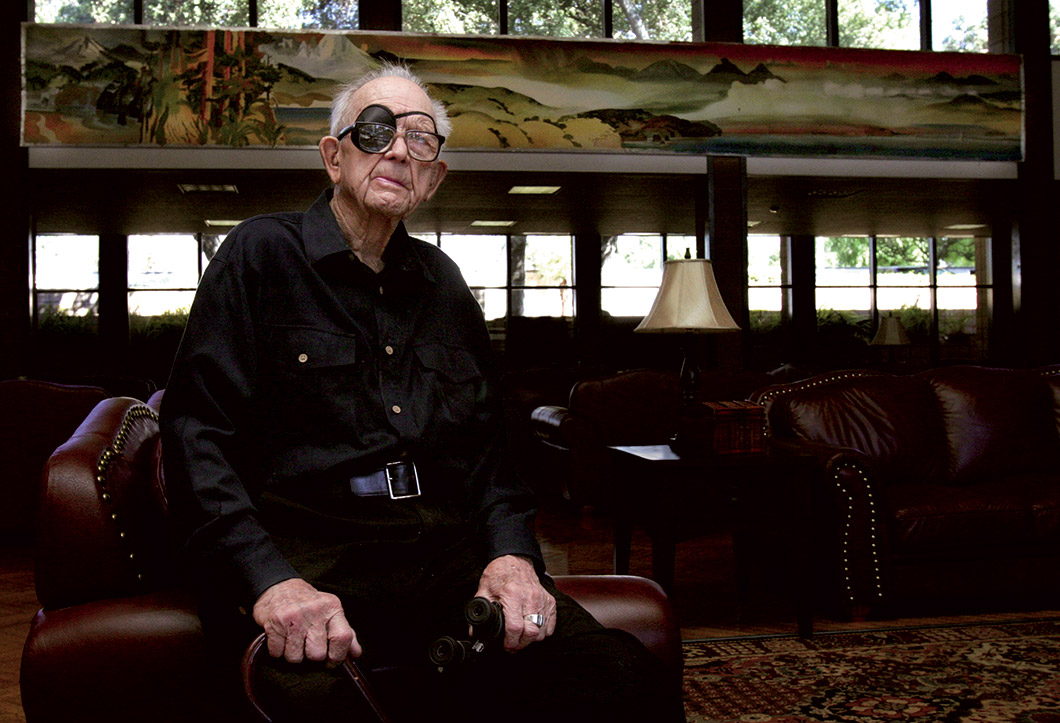 Zornes pulled out a 44- x 35-foot piece of watercolor paper, soaked it in his bathtub, rolled it onto an aluminum backing and painted the marvelous land-scape over just three days. It depicts the coast from Northern California down to the Mexico border.

A Pasadena physician spotted the work during a Utah exhibition and paid Zornes $35,000 for it, a modest sum by today’s standards. He had planned to hang the work in a medical clinic, however its size apparently was too imposing. The physician instead donated it to Harvey Mudd College, where it has hung in the college’s Platt Campus Center for a number of years.
And what of Zornes, who stopped by HMC in October? As he approaches 100, the iconoclastic artist continues to paint, despite failing vision and other encumbrances of advancing age.

His lore began in 1908 when Zornes was born in Camargo, Okla., the son of a cowboy and a prairie schoolteacher. To keep their young boy occupied, Zornes’ parents introduced him to art.

“My mother set me to drawing to keep me out of mischief,” said Zornes. “I always looked forward to Christmas, when I got watercolor boxes and pads of paper.”

He quickly flourished, so much that by early in the Depression he was earning a fair living sketching people for small change.

“I found to my advantage that I could draw pictures of people’s kids, dogs or houses and get a little money for my work,” he said. “I could always talk people into buying something from me. It became a survival device, and I’ve kept on surviving throughout my life.”

Early on, Zornes, who studied at the Otis Art Institute in Los Angeles and Pomona College, gave equal attention to oils and watercolors. However, he tilted toward watercolor for practical reasons: because it was lighter, an artist could carry much more paper than canvas. Additionally, watercolors dried more quickly than oils, enabling artists to more easily transport them. And, paper was cheaper than canvas.

Success came quickly for the young watercolorist, who sold his first painting in the early 1930s and hasn’t looked back—until recently, when time began to nip at his heels.
Still, he paints—despite the near-complete numbness in his brush hand, the waning vision that forces him to work with eyes trained just inches from a canvas, and a gait that requires he spend more time than he wishes shuffling back and forth between palette and canvas in his Claremont studio. 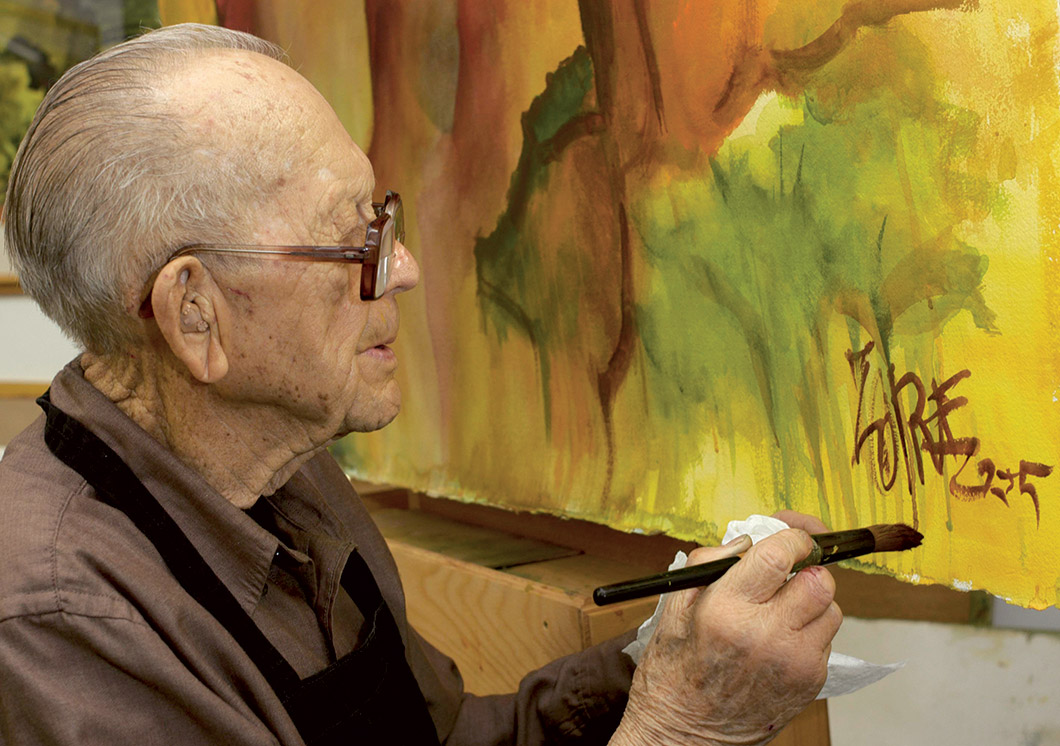 “He paints every day,” said his wife of 63 years, Patricia, a former art student of his.

In fact, in January, Zornes celebrated his 97th birthday by presenting an exhibit at Pitzer College, where he once taught. The exhibit featured 30 watercolors—all of them completed after his 90th birthday.

Not bad for the last great early California abstract realist, one of 12 watercolorists credited with elevating their medium beyond sketch to a legitimate art form during the 1930s and 1940s. The group included famed watercolorist Millard Sheets (1907-1989), who, during the 1920s, influenced Zornes to make art his career.

“I learned (from him) that all you need to do is go out, look at the world around you and paint.”

Zornes still paints professionally as he has since the Franklin Roosevelt Administration. In fact, it was Roosevelt who hand-picked one of Zornes’ paintings to hang in the White House. The selection transformed Zornes from a regional artist to one of national stature.

“You get a few kudos like that and you begin to get a reputation,” said Zornes, who has authored two books on his work. “I’ve had the good fortune, through persistent work, to gradually get the kudos that are necessary to become identified. Eventually, after long practice, you develop a following and your work becomes collectible.”

During the ensuing years he also served as one of 42 artists chosen by the War Department to chronicle World War II through their paintings. Some of Zornes’ work is still archived somewhere in the Pentagon. In addition to the White House, his work hangs in the Library of Congress, the Metropolitan Museum of Art and the Los Angeles County Museum of Art.
As impressive as the mural in Platt is, one Zornes painted in 1936 is just as impressive. The work, which scrolls across the top of four walls inside the Claremont Post Office, gives a sistinal view of the artist’s community as seen from the building when orange groves dotted the landscape.

Certainly, the pace has slowed since those early days. Zornes recently decided to curtail his busy workshop and lecture schedule, which for years kept him traveling from country to country. Finally, as he nears 100, he’s content to live off the income derived from his paintings.

These days, there are many paintings. In fact, a rumpled stack nearly a foot thick graces a rear corner of his studio, some awaiting completion, all needing frames—unlike other artists, Zornes prefers to do the framing himself.

“He’s a perfectionist,” said Walter Ebrahimzadeh, whose Artist Trait gallery in downtown Claremont carries Zornes’ work. “He doesn’t sign a painting until it’s complete. He’s got paintings he began 50 years ago that he still isn’t satisfied with.”

For a man his age, he paints voraciously, though he’s no longer able to read without a projector. He paints larger than ever because his eyes no longer permit him to work on smaller projects. And, he paints in a style that diminishing eyesight due to macular degeneration has forced to evolve, with bolder colors, deeper lines, greater contrast and less detail. On the bright side, his mind, imagination and work ethic remain intact.

“I have to paint in sharper contrast in order to see what I’m doing at all,” he said. “And, I must have a greater definition of line in order to see the lines. I am influenced by my failure to see.”

In earlier days he traveled the globe—painting, teaching and lecturing. More recently, his travels have taken him from doctor to doctor around the country in search of a way to slow his vision loss. Nothing has worked.

“I suppose I’m facing the time when I won’t be able to draw and paint,” said the one-time aspiring journalist. “I suppose I’ll get to the point when I can’t see, but I’m a thoughtful person and I’ll just find some way to develop writing.”

Indeed, as time passes it takes its toll—even on artists.

“Wrestling with binoculars, painting on location, coming back here and having to get the lighting right—it seems to take an awful lot of energy,” he said. “Painting was easy when I was young and strong. Now, it’s hard work.”

Despite the constraints, Zornes insists he’s as good an artist as ever.