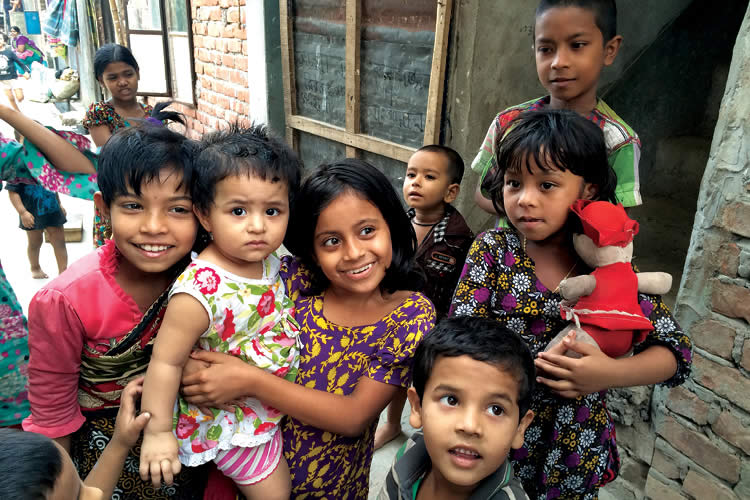 The babies and toddlers wear unusual headgear. Some sitting in their mothers’ laps sport a lacy cap of 128 electrodes. Others wear a band with optical sensors wrapped around their small heads. All are part of a study to measure the structure and function of their brains.

Born into the slums of Dhaka, Bangladesh, these children face many obstacles to healthy development, including malnutrition, infection and pollution. Their early exposure to adversity can have long-term repercussions. For example, says Boston Children’s Hospital Postdoctoral Research Fellow Katherine Perdue ’05, researchers working in Bangladesh have noticed worse cognitive outcomes for children who experienced infections at a young age. Dr. Charles Nelson, Perdue’s advisor and director of the hospital’s Laboratories of Cognitive Neuroscience, had found similar shortcomings in the brain function of severely neglected Romanian orphans.

Perdue is part of a multinational research team led by Nelson that wants to help children’s brains live up to their full potential. They’re creating a testing toolkit to determine better ways to assess cognitive development and to protect young brains from environmental stressors in Bangladesh and other developing countries.

Knowing that environment shapes the developing brain, the researchers from Boston and the University of Virginia, University College London and International Centre for Diarrhoeal Disease Research in Bangladesh hope to identify which stressors have the greatest impact on future brainpower. They believe taking a quantitative approach rather than relying on observed behaviors will make it possible to intervene earlier if a child’s brain isn’t developing normally. The Bill and Melinda Gates Foundation also saw promise in this thinking and funded their two-year effort to examine the connections between early adversity and brain development in more than 300 babies and toddlers in urban and rural Bangladesh.

When a country has limited resources, you need to figure out how to maximize the ability to help kids with investments that are possible.

The first few years of life are so crucial to brain development,” says Perdue. “We’re looking at ways to tease out what’s happening, especially in parts of the world where brain development can get knocked offline.”

To do this, they’re using three noninvasive imaging techniques. One is magnetic resonance imaging (MRI), which Perdue says is considered the “gold standard” for measuring brain anatomy but scarce in the developing world. Another is electroencephalography (EEG)—that’s where the cap of electrodes comes into play—to test for memory and direct neural activity. The third technology is functional near-infrared spectroscopy (fNIRS), Perdue’s area of expertise and the focus of her doctoral work in engineering at Dartmouth College. With fNIRS, a band containing light sources and detectors is placed around a baby’s head to look at brain function via oxygen levels.

“This is a much more complicated and ambitious project than has been done before,” says Perdue. “Teasing out which stressors are most important is the pipedream. When a country has limited resources, you need to figure out how to maximize the ability to help kids with investments that are possible. Right now, we have a lot of information about the stressors they’re exposed to and are looking at brain function, but we haven’t yet put the two together.”

Nonetheless, the Boston researchers accomplished a lot in a short time. Perdue explains,“In one year, we set up a lab across the world, trained people, got data back and started data analysis.”

It hasn’t been easy. No study like theirs had ever been done in Bangladesh. The apartment building housing the lab didn’t have appropriate electricity for the imaging equipment, which had made a perilous journey over rutted roads. The medical officers and field researchers at the International Centre for Diarrhoeal Disease Research in Dhaka required training. Most of the Boston team members had to simultaneously work on other ongoing research projects.

“The strength of the project is that we trained our collaborators in Bangladesh to collect data rather than doing it ourselves. It’s a testament to them and their hard work. Many of the people there don’t use computers in their everyday lives, but to run the study, they have to watch two different computers and a baby at the same time,” says Perdue, who helped set up the fNIRS testing in Dhaka and trained staff in the technology both there and in Boston.

While in Bangladesh, Perdue learned that her collaborators were personally acquainted with the environmental stressors they were studying. She says, “Everyone I worked with who had a child spent a lot of time at hospitals because of illness or accidents. Having an advanced degree didn’t insulate them from hardships. Yet people in Bangladesh take the hardships in stride and have a lot of hope for their country’s future.”

Perdue missed the Boston research team’s October return trip to Bangladesh because her own baby with her husband, Cal Pierog ’05, was due (Leo was born Oct. 26). But she says, “I would love to go back. I found out the people of Bangladesh are wonderful and famously welcoming.”

Meanwhile, the project, along with another examining the brain response and facial expressions of typically developing infants in Boston, continues to provide the professional experiences Perdue sought when she joined Nelson’s lab in 2013. After studying physics as an undergraduate and a theoretical side of engineering in graduate school, she says, “I was attracted to the focus on social impact. I wanted to work with someone who cared for children and their well-being so deeply.”

Perdue hadn’t worked with children before but is enjoying the switch from adults. She says, “In some ways, adult brains are boring. They don’t change that much. I also like the technical challenge of working with children, figuring out how to get robust data from people who can’t be given instructions.”

The role of a researcher suits her as well. Perdue says, “I was bitten by the research bug at Mudd. I was doing experimental physics at the time, and professors [James] Eckert and [Patricia] Sparks really inspired me. I first fell in love with brain imaging at Mudd, too, when I took a biophysics class with Professor [Richard] Haskell. I had been studying cognitive science and physics, but it hadn’t occurred to me before then that I could combine them in this way. I’m happy where I am now. I get to focus on research and science and have the opportunity to work with great people on interesting projects.”