Need access to a Dremel tool? Sewing machine? Vise grip? Enter the Mudd Makerspace. Spearheaded by Sam DeRose ’16, Sherman Lam ’16 and Evan Kahn ’17, the campus’ newest workspace gives makers of all backgrounds the opportunity to pursue personal creative projects and attend “skill-swap workshops” to broaden their making skills. Generous support for the Makerspace was provided by trustees Michael Blasgen ’63, Dylan Hixon, Kevin Schofield P13 P13, Tayloe Stansbury P16 and Michael Wilson ’63; emeritus trustee Scott Fraser ’76; and alumnus Jason Fennell ’08. It is considered a prototype for a larger version to be housed in a future academic building. “They’ve asked us to use the next three years to figure out what works and what doesn’t—anything from whiteboard paint and tables to organization and functionality,” says DeRose.

Don’t think of it as another machine shop. “We want it to be a place where people don’t feel like they have to follow all the rules,” says Lam, “where there is some disorganization for creativity’s sake.” Unlike the machine shop, you’ll find no proctors here—just “organizational managers” to ensure stations stay clean and safe. “It’s awesome to know that the school wants us to explore our creative side in a place that we can make our own,” says Zakkai Davidson ’16, a computer science graduate. Makerspace allows round-the-clock access to low-hazard equipment in an expansive workspace unstifled by rules, so users can concentrate on what’s important: creating! 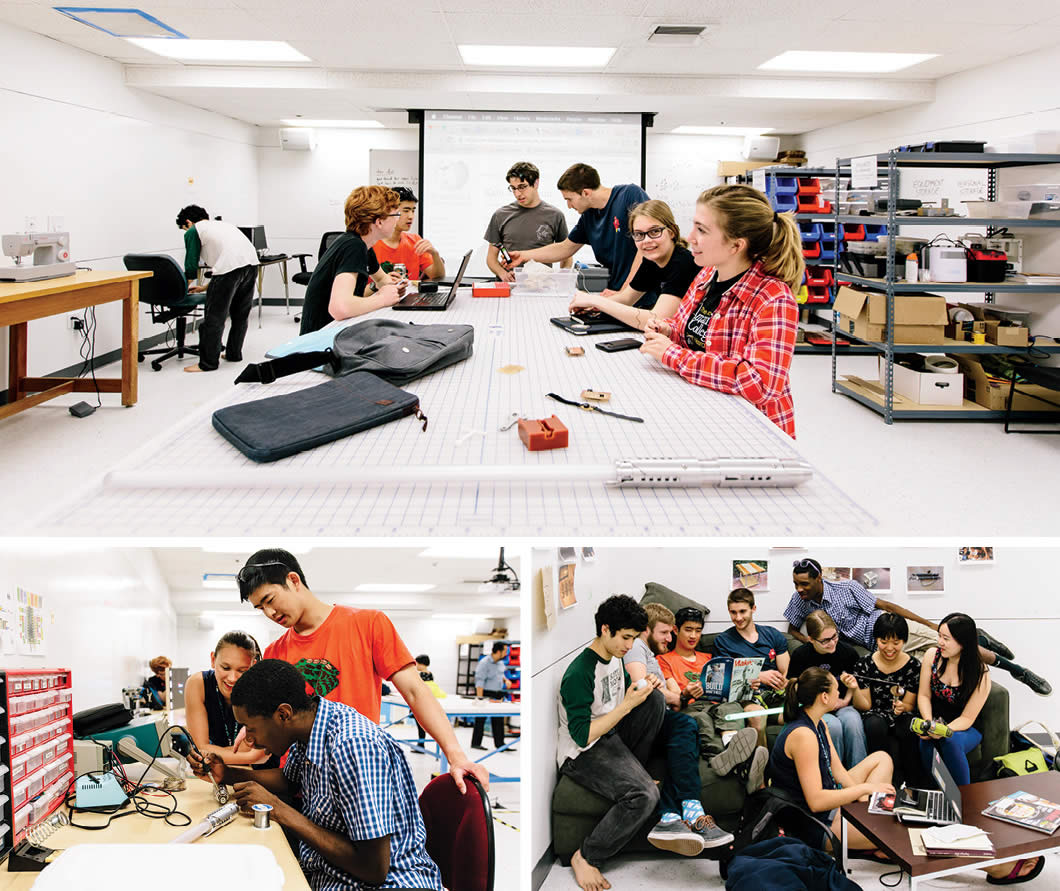 Topped with a self-healing, gridded mat, the drafting table is the room’s central workspace. Makers are encouraged to spread out here, provided they clean up and put away projects at storage stations.

As a fun project over winter break, Lam fashioned this working light saber replica. An aluminum handle contains the electronics, while a polycarbonate tubing houses the LED lighting.

An appropriate find at the personal storage station: The Handmade Skateboard by Matt Berger, “the definitive book on building custom skate decks of all shapes and sizes.”

Schematics offer easy reference for chips and boards used frequently by hobbyists—for example, the Arduino Uno, a popular board for basic data processing.

At the electronics station, an oscilloscope can analyze electric signals to help makers work on creative endeavors like interactive light-up LED clothing. A soldering iron allows for circuit board work, while drawers house parts ranging from jumper wires to specialized high-capacity battery connectors.

The Makerspace’s first skill-swap session included members of the Mudd Underground Creative Collective. They swapped sewing lessons for tutorials in circuit board schematics with engineering students. Club leaders hope to broaden attendance so that faculty and staff can share their maker skills as well as use the space. “We don’t want the space just to be for engineering and computer science student work,” says DeRose. “Engineering Professor David Money Harris used the sewing station to fashion some of his son’s Boy Scout patches!”