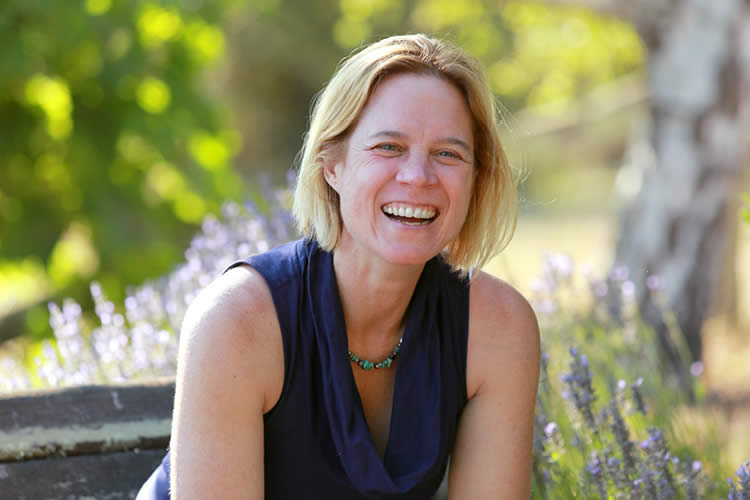 Suzie Gruber ’87 was standing in a chemistry  lab at Princeton, missing her Harvey Mudd humanities and social sciences classes, wondering if she was doing the right thing.

“It was an overwhelming thought at the time, because I’d been on this path since grade school,” says Gruber, who graduated from Mudd with a chemistry degree and was seeking a graduate degree in the field. “At the time, I actually considered jumping into psychology [her minor field], because I just wasn’t sure what I wanted.”

I absolutely love research. So when I found Somatic Experiencing and the NeuroAffective Relational Model, I knew I had found something really important.

But Gruber quelled the thought, went on to earn her master’s degree in chemistry and landed a great job at a well-funded startup doing cutting-edge drug discovery research in a fast-paced, energetic environment. She went on to work in the biotech industry—doing research, overseeing operations and then consulting—for more than a decade. But when she got a look inside of “big pharma,” that unsettled feeling returned. She decided it was time to do something that could affect people’s lives in a more immediate way. Time for a career, she says, that “fit the deeper me.”

Gruber says that Levine developed Somatic Experiencing as a way for people to work through the fight-flight-freeze response in order to resolve trauma. “We’re wired to survive. That is the body’s first priority. So when we experience a life threat, we go into fight, flight or freeze. This reaction is meant to be a time-limited process so that when the threat goes away, we get up and we shake it off. But there are many, many reasons why that survival energy instead gets stored in the body, and it ends up looking like chronic muscle tension or stress, including post-traumatic stress disorder.”

Somatic Experiencing, along with Dr. Laurence Heller’s NeuroAffective Relational Model (NARM), forms the basis of Gruber’s private practice. NARM emphasizes self-regulation and working in the present moment, and Heller defines it as a “resource-oriented, non-regressive model [that] emphasizes helping clients establish connection to the parts of self that are organized, coherent and functional.”

According to Gruber, “Both modalities help people resolve trauma. I decided to get trained in both because I believe in the underlying theory behind them and also because they helped me tremendously in resolving my own remaining imprints from my upbringing,” says Gruber, an only child whose father suffered from mental illness. “Dr. Heller figured out that if we work with both the body and the belief around the importance of the relationships with our caregivers, we can unlock aliveness. The modality he created helps people feel confident and safe pursuing what they most love.”

Gruber’s clients include individuals seeking healthier relationships or looking to advance in their careers. “I help them look at what’s in the way of them really experiencing their personal power and moving toward what they most want.”

In her small office in Sebastopol, California, or via Skype, Gruber helps clients explore their feelings and track any experiences they’re having in their body, “so it’s not just ideas, because the body has a lot to say about what’s going on.” It’s why she prefers not to have sessions by phone; face-to-face conversations help her track a client’s body language, note subtle shifts in pulse, breathing and posture, and include any observations in discussions.

“The most important piece here is that we’re all physiologically wired to move toward aliveness. So I really encourage everyone to keep listening to that inner voice and trust that you can overcome any limitation you encounter and to find people who can help, because we’re out there,” Gruber says.

Listening to her own inner voice ultimately helped Gruber find a fulfilling career. “I’ve had people ask me, ‘You got a degree in chemistry, what are you doing?’” Gruber says. “A Harvey Mudd education is so much bigger than that. It almost doesn’t matter what you major in. For me the more important aspect to the education has to do with critical thinking and the ability to communicate and express. It’s so clear to me how much I learned back then.”

She’s now passing this knowledge, and what she’s learned since, along to others. “You don’t have to know what the outcome is going to look like or even the exact path. It’s just one foot in front of the other and trusting that basic aliveness.”