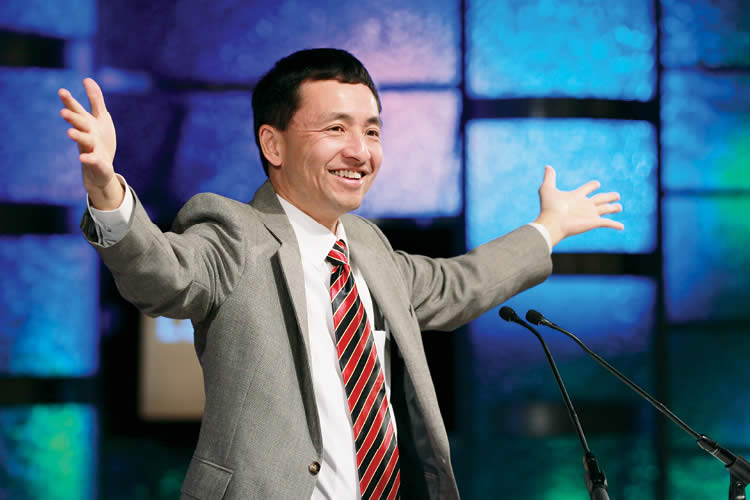 At the dawn of the 21st Century, two researchers published the book The Myth of the Paperless Office. In it, they documented one of the great ironies of the digital era: As organizations go digital, paper consumption rises.

Were it not for this fact, Karl Chan’s career might have unfolded differently. But as it happens, Chan ’89, P19 is president and chief technology officer of Laserfiche, where he helps paper-based companies digitize their operations. “If you had asked me 25 years ago, I would have said everything would have been digitized by now.”

It hasn’t happened. Much of corporate America is still awash in paper. Last year, when Wired magazine looked at efforts to create the paperless office, it concluded, “We use more paper today than during the days of the Pet Rock.” In the U.S., for instance, the number of paper documents is rising by 880 billion a year, Wired reported.

So Chan goes to work each day to orchestrate the creation of new products to help tame the paper monster. Under his leadership, Laserfiche has scored a string of hits, including Laserfiche for Windows. His expertise was acknowledged recently by the Los Angeles Business Journal, which gave Chan its Lifetime Achievement Award. Chan was recognized for his leadership in creating innovative technology by Journal publisher and CEO Matt Toledo, who lauded “Karl’s creativity, passion and technical expertise.”

Chan was instrumental in creating Laserfiche for Windows in 1994, Laserfiche Workflow in 1997 and Laserfiche Forms in 2011. More recently, he drove the development of both Laserfiche Connector—an easy-to-use tool that enables organizations to integrate Laserfiche with other software applications without programming—and Laserfiche Cloud. One secret of Chan’s success lies in part with his management style, which encourages teamwork among Laserfiche employees. As one of the company’s top officials, Chan could be expected to occupy a corner office. In fact, he has no office at all. “I have my desk out in the open with everyone else,” he says.

At the company’s headquarters in Long Beach, California, there are no cubicles, just an open space where its software creators constantly rub elbows. “It generates a lot of impromptu meetings,” says Chan. “Someone will join the conversation and say, ‘I have an idea.’”

Sometimes the idea will come from Chan himself, who started at the bottom at Laserfiche 26 years ago after earning an engineering degree from Harvey Mudd and an M.S. in computer science from California State University, Long Beach.

“When I started, I was basically a programmer,” he recalls. Over time, he moved up, becoming manager of software development, then chief engineer. He was named chief technology officer in 2005 and president in 2014. But he never left programming behind. “Even in my current position, I try to squeeze in time to write software. It’s what I love to do. But it also keeps me familiar with where software is going.” That’s critical for the company. “Ultimately the main product of the company is software.”

Like many of his peers, Chan was drawn to software through computer games. But he could never beat his brother, so he hacked into game program software and found loopholes that he could exploit to improve his odds.

In time, his interest in computer games faded. But his interest in software remained and eventually led to his career at Laserfiche and his mission to help organizations enter the digital age. “We digitize the paper and the process so that everything is so simple that anyone can digitize their processes,” says Chan.

Document filing then becomes automated and document retrieval is nearly instantaneous. Once digitized, documents can be imported from mobile devices, scanners and other sources. And as paper files and the file cabinets that held them disappear, office space is freed for other uses. Since 1987, the company has served 35,000 customers, ranging from small businesses to federal agencies and Fortune 1000 firms.

When he went to work for Laserfiche, Chan used his diversified Harvey Mudd engineering training to solve multidisciplinary problems. He’s providing other Mudders with an opportunity to do the same through Laserfiche’s summer internship program, which included five Harvey Mudd students in 2015. He makes sure it’s not busywork. “When we started the internships, I wanted people to work on meaningful projects. So our interns solve real problems.”

The biggest problem, of course, is the need to find solutions for organizations awash in paper and to make sure products mesh with a sector that is constantly shifting.

“The landscape changes so fast when you work in technology,” says Chan. “What you work at today will probably be obsolete in a few years. It’s like building sandcastles on the beach. You work hard, but when the tide comes in, the sandcastle is gone.

“We have to come back and rebuild our products over and over,” he says. “So we really have to love what we do.”