With acoustics that rival some of the best concert venues, the Wayne ’73 and Julie Drinkward Recital Hall provides an intimate, stylish home to concert series, recitals and other artistic performances, all free to students and the surrounding Claremont community. The hall was named in recognition of Wayne A. Drinkward ’73, chair of the board of trustees, and his wife, Julie, who donated $2 million in support of the R. Michael Shanahan Center for Teaching and Learning. Shanahan Center designers Boora Architects and acoustical engineer Jaffe Holden created a sustainable, featurefilled space that elicits rave reviews from performers and audiences alike. 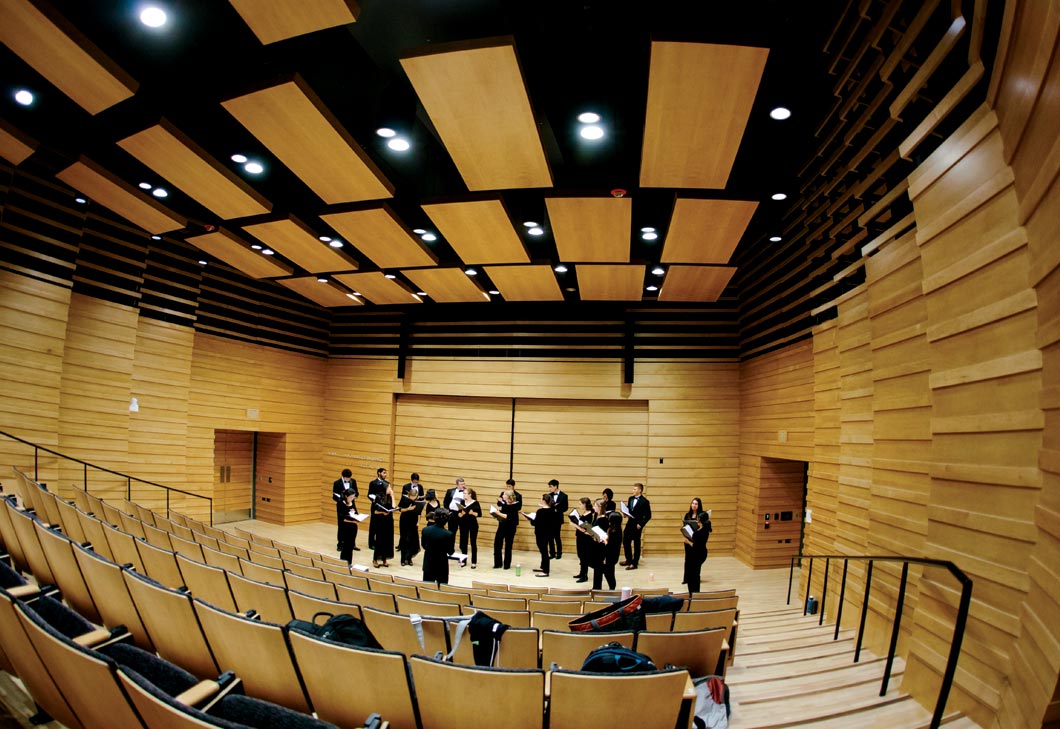 Ceiling Reflectors. The ceiling is covered by 21 wooden ceiling reflectors in four different sizes and shapes. The reflectors above the performers are the largest and most closely spaced, designed to reflect sound out into the audience. Reflectors gradually become smaller and more widely spaced toward the back of the room, where sound reflection is no longer required. Each panel is angled slightly to bounce sound from the stage to the audience.

Performers. The recital hall hosted more than 30 performances during the 2014–2015 academic year, including one by the Claremont Chamber Choir, a select, 20-voice group led by Charles Kamm, associate professor of music, that focuses on an a cappella repertoire.

Faceted Walls. Each sidewall of the recital hall is composed of 10 separate segments in a “folded” pattern, carefully positioned to the acoustical engineer’s criteria to enhance the natural acoustics of the room and to diffuse sound energy evenly throughout the space.

Wall Slats. Surrounding the room are 3,605 linear feet of horizontal wood slats. The density and spacing of the slats vary, with the densest slats at the base of the room and the least dense closest to the ceiling. This arrangement diffuses and scatters sound energy in the lower portion of the room, while widely spaced slats at the top of the room expose more of the acoustical drapery that sits behind the open grille.

Volume Chambers and Acoustical Drapes. At the upper portion of the room, the reflective wood panels behind the slats stop, and the Hall is open to “volume chambers” behind the grille. A line of acoustical drapes can be drawn to change the volume of the room, thereby altering the acoustical performance of the space. The size of the volume chambers was carefully calculated by the acoustical engineer to allow the room to adapt its reverberation time and acoustical character to accommodate a wide range of events, including choral, string quartet and amplified electronic music performances as well as film screenings and lectures. The larger room volume, with the acoustical draperies retracted and the volume chambers open, provides the additional reverberation required for a choral or music performance. Deploying the drapes and reducing reverberation enhances voice intelligibility for spoken word or lecture uses.

No Chalk Allowed. Carefully concealed in the gaps between the ceiling reflectors are a large central projection screen and an angled secondary screen that drop to enable use of the space as a 100-seat classroom. Every seat has a tablet arm, and two oversized sliding panels in the stage wall can be drawn open to reveal a large whiteboard for instructor use (a chalkboard is not allowed in this room as the chalk dust could interfere with musical instruments and equipment).

Green Room. A set of double doors leads to a Green Room, which doubles as a seminar classroom to support performers and guest speakers. The double doors were carefully sized to allow passage for the 7-foot grand piano.

Acoustically Critical Construction. To ensure the Recital Hall’s success as a high-caliber performance space, minimizing background noise is crucial. “Double layer” walls, composed of 8” solid concrete wall plus an interior stud wall with three layers of drywall, enclose the room and ensure that noise from adjacent spaces will not intrude. The ceiling is suspended from the concrete structure above with spring isolators to absorb any vibrations or sound energy before they can enter the room.

Mechanical System. Keeping 100 audience members comfortable is critical but tricky, since air moving in mechanical ductwork creates noise that can be especially noticeable when a room is acoustically isolated from adjacent spaces. The hall is cooled by air supplied at very low velocity to a plenum under the tiered floor, and openings in the risers allow cool air to spill out and cool occupants, while the air in the upper portion of the room—above people’s heads—remains warmer. This strategy uses less energy (since it only cools the air that people actually inhabit) and is extremely quiet, which is especially important for a performance space.